The Engineer (or Dell Conagher) is a soft-spoken, amiable Texan with an interest in all things mechanical. He specializes in constructing and maintaining buildings that provide support to his team, rather than fighting at the front lines.

As stated beforehand, the Engineer is inferior in direct combat compared to most of the other Offensive and Defensive classes, only carrying weapons with functions nearly identical to the Scout. The Engineer's main ability comes from the various gadgets which include the Sentry Gun, an automated turret that fires at any enemy in range, the Dispenser, a device that restores the health and ammo of nearby teammates, and Teleports that quickly transport players from point A to point B.

Like most of the mercenaries, the Engineer carries a shotgun, although unlike most classes, it acts as his primary weapon rather than his secondary weapon, similar to the Scout. A variation to this weapon, called the Frontier Justice allows the Engineer to deal a number of guaranteed critical hits upon a sentry or teleporter's destruction; the number of shots is dependent on how many kills (2 shots per kill), assists (1 shot per assist), or teleports (1 shot per teleport) the buildings caused during their lifetime. The main downside to this weapon is the notably smaller clip, having only 3 bullets per round instead of 6. The Frontier Justice also enables the Engineer to preform one of two available taunt kills (more than all classes except the Pyro) called Dischord, in which he strums his guitar, before destroying it by bashing it against a potential enemy, which, if successful, will break their neck.

The Engineer carries a pistol as his secondary, another similarity he shares with the Scout, which fires quickly and can dispose of annoying enemies (such as Spies). He can also substitute this weapon for a device known as a Wrangler which allows him to control a sentry and grant it a damage resistance bonus.

The Engineer carries a monkey wrench as his chosen melee weapon, which is useful for constructing buildings faster, upgrading them, and repairing them. A variation of this wrench is called the Southern Hospitality, which causes bleeding damage upon any enemy mercenary it successfully hits, which makes it great for Spy-checking. Another variation is not a wrench at all, but rather a mechanical prognostic hand called the Gunslinger, which adds 25 health to the Engineer as well as allows him to construct mini-sentries, which are weaker than standard sentries, but build and fire faster, and cost less metal. The Gunslinger also enables the Engineer to use his second taunt kill, in which the Engineer revs up the motor in the hand and causes it to spin and then thrusts it forward; if an enemy mercenary is unfortunate enough to be hit by the Gunslinger, they will be stunned and take gradual damage from the weapon slowly drilling its way though the victim's body, before gibbing them when the action is complete; if an enemy mercenary runs into the Gunslinger after it has been thrusted forward, they will be ragdolled when the action is complete.

Like the other characters, the Engineer is an anti-hero/anti-villain depending on whose side you're playing for. 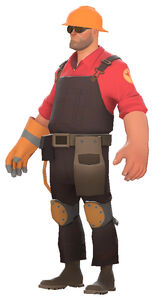 "Gotta move that gear up!"

The Engineer with the other mercenaries. 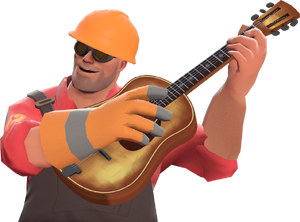 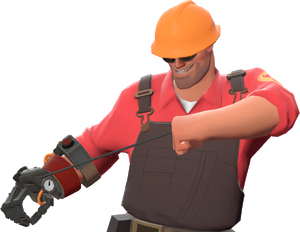 The Engineer's second taunt kill, the "Organ Grinder"
Add a photo to this gallery 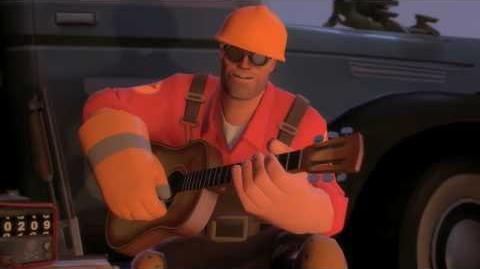 Meet the Engineer
Add a photo to this gallery

Engineer on the Villains Wiki

Retrieved from "https://hero.fandom.com/wiki/Engineer_(Team_Fortress_2)?oldid=1680369"
Community content is available under CC-BY-SA unless otherwise noted.