Help the Kongs in their adventures

Aquatic friend
Engurade the Swordfish is a character who appear in the Donkey Kong Country series. he is an animal buddy who helps Donkey Kong out when he is underwater. He can attack the enemies using his nose as a sword, he is said to be the water version of Rambi the Rhinoceros.

Enguarde appears in the Donkey Kong Country games only found underwater. He can be ridden by Donkey Kong, Diddy Kong and others 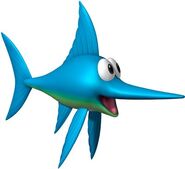