Fighter
Enid is one of the main characters of the 2017 series OK K.O.! Let's be Heroes.

Enid is tall with a thin waist, and wide hips and legs. She has warm brown skin and purple hair tied in a small spiky bun. She has big eyes, a small rectangle shaped nose, and thin lips. She typically wears a sleeveless blue Gar's Bodega uniform crop top that is torn at the bottom to expose her midriff, black shorts, and brown boots, along with white cloth wrappings on the upper half of her arms.

Enid is the most responsible of the main trio. She tries to use logic and critical thinking to make rational decisions. This is primarily shown in the Pilot, in which she stops K.O. from calling a power battle based on KO's shoddy detective work.

She seems to react to irresponsibility the way a normal human being would, as she complained about KO making "another hole in the ceiling." She could be quite patient considering the idea of how many times KO made a hole in the ceiling prior to the Pilot.

Enid has a power level of 3, thanks to her experience working and fighting bad guys as an employee of Gar's Bodega. Indeed, she's the employee with the highest power level of all (excluding Mr. Gar). Technically, she's more intelligent than Rad and K.O., analyzing first the problem they're leading with rather than trying to solve it with brute strength.

Due to her ninja training and her days working alongside Rad and Mr. Gar, Enid is strong enough to fight on even footing with people far stronger than her. In "You Have to Care", she managed to defeat Elodie in a power battle, despite Elodie's power level of 4.

Enid has excellent combat skills. Her fighting style seems to focus more on kicks and strategy, rather than strength, which goes with her epithet of ninja. She has shown to be extremely agile and flexible, able to move quickly and with precision. She's also very resistant to damage, as seen in "T.K.O." where she could resist some of Turbo K.O.'s attacks.

As a ninja, Enid can utilize many special techniques based on stealth and discretion. In many episodes, she has been seen doing some attacks and moves related to this:

In the episode "We've Got Fleas", Enid is turned into a were-bunny after being bit by Crinkly Wrinkly. She became a bunny because, according to herself, she's quick on her feet. In this form, Enid obtains bunny-like abilities and particularities, like digging tunnels underground and eating carrots. Her strength and speed are assumed to increase as well. 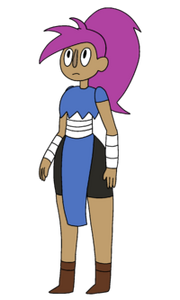 Retrieved from "https://hero.fandom.com/wiki/Enid?oldid=1887978"
Community content is available under CC-BY-SA unless otherwise noted.