Scott Pilgrim vs. the World

Envy Adams, whose real name is Natalie V. Adams is an antagonist turned heroine from the comic Scott Pilgrim. She's Scott's ex-girlfriend whom by the time was antagonistic towards him became more kind towards him and Ramona.

In the 2010 film, she was portrayed by Academy Award wining actress Brie Larson, who also portrayed Mason Weaver in Kong Skull Island, and Carol Danvers/Captain Marvel in the Marvel Cinematic Universe.

Envy is somewhat snark, rough and pretty pessimistic about everything around her besides Scott, She is, however, Affable towards the people who is kind towards her and has show gratitued towards scott, Once they got a closure about her past relationship, She has became more optimistic towards him and Ramona, and even trying to warning him about Gideon. 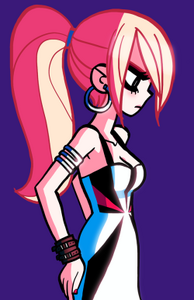