Eri is the best friend of Hana Nono and a minor character from the anime series, HUGtto! Pretty Cure.

She was voiced by Shiori Izawa.

Eri is a teenage girl has tan skin a long medium brown hair with tied up into the ponytail holding by the pink band mauve hair piece, and only her hair is loose to the tuft at her bangs in the middle on the forehead and brown eyes. She wore a light blue hoodie powder on the dark blue strings, a dark blue and yellow bike shorts, a white and red tennis shoes and white socks.

Eri was a very passive and meek. She was tending by the bullies while Hana leaving her able to help her, she also is a peer pressure and easily succumbs.

In the Hana's flashback, Eri tries to defend herself who getting a bullies into a fight and Hana stood her when they got away from her. Besides, Eri not too afraid will helping Hana aftermath, and been guilty for Hana has been transferred at L'Avenir Academy.

Meanwhile, she holding her phone to noticed that Hana is been promoting from the Tengu inn in her internet, to comes to met Hana. This is the having silent awkward, she running away at guilt. Saaya and Homare comes around at her again, and they want decide to talk at Eri. When she listened to Saaya and Homare reassured at her while she was regretful as been feeling too weak admits whole at this time long to protect with Hana as been harassed during the flashback, and said to apologize to Saaya and Homare.

However, the Pretty Cures will help her to cheering that team while they doing the makeup, and Hana forgive her. Later, the Cures challenge to JinJin & Takumi Oshimaida to purifying by the Cures to attack them. She waving says good-bye to Hana and the others, doesn't longer burdened in the flashback. 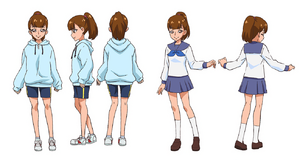 Concept art for Eri from the Bluray art gallery. 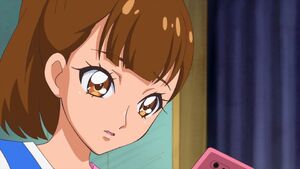 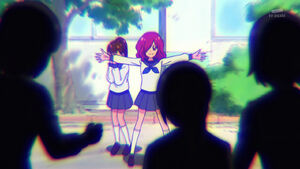 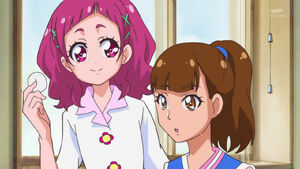 Hana has come to help Eri. 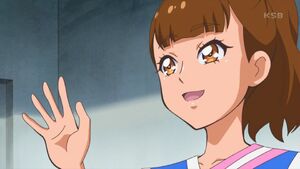 Eri says good-bye.
Add a photo to this gallery

Retrieved from "https://hero.fandom.com/wiki/Eri_(HUGtto!_Pretty_Cure)?oldid=2241907"
Community content is available under CC-BY-SA unless otherwise noted.