Protect others from Kai Chisaki and herself.

Escape Kai Chisaki.
Overcome her trauma.
Repay Mirio Togata for his kindness towards her (all succeeded).

Eri is a major character from the anime/manga series My Hero Academia. She is a little girl with the Quirk to rewind and reverse the state of living things.

She is voiced by Seiran Kobayashi in the Japanese version of the anime, and by Emily Neves in the English dub; the latter of which also voiced Gine in the Dragon Ball franchise and Ayase Shinomiya in Guilty Crown.

Eri is a small, young girl with pale blue-grey hair and red eyes. She has a small horn on the upper-right side of her head, this horn appears to grow in conjunction with her Rewind Quirk. Due to Overhaul's experiments of disassembling and reassembling her, she has a number of scars across her arms.

Eri is a timid and innocent little girl and as such, she wants no part in Overhaul's horrid plans. During her childhood with the Shie Hassaikai, she repeatedly tried to resist and escape her captivity only to be stopped and recaptured every time, leading her to accept her fate as a prisoner. Having mentally accustomed to this treatment, Eri does not cry or scream when somebody intends to harm her. Instead she remains silent while trembling in fear, knowing that she doesn't have a choice but to accept whatever will happen to her. After remembering Izuku Midoriya helping her up and holding onto her, she cried upon realizing that his act was out of genuine kindness.

Eri was lead to believe by Overhaul that her existence only served to bring pain and suffering onto others, which lead to the villain exploiting her desire not to harm others and nearly return to his clutches. Despite being in a state of fear and cruelty, she would rather give herself in rather than believe that others are being harmed because of her.

After her rescue, Eri still remained timid and was still psychologically affected by her past treatment, with her being unable to smile due to not knowing how to and not having any experience of happiness. During the School Festival however, Eri overcomes this and feels an overwhelming burst of joy while witnessing the performance, leading her to smile and be freed from her past.

Thanks to being nurtured by U.A. and the encouragement from Izuku and Mirio, Eri is now more optimistic and determined, no longer seeing her Quirk as a curse and starting to control it. When Mirio expresses reluctance towards the idea of her giving him his Permation Quirk back, Eri tells him not to be guilty as she has been training for his sake, and successfully restores Permeation.

When Eri was a toddler, her Quirk manifested and she accidentally used it on her father, reversing him until he no longer existed.

Her mother disowned her out of fear, and she was taken in by her maternal grandfather, the head of the organized crime syndicate Shie Hassaikai.

Her grandfather often left her in the care of his protégé Kai Chisaki, however, when her grandfather fell ill, Kai took over the organization and transformed it into a villain league. He experimented on little Eri, eventually discovering that her blood and tissue had the ability to reverse human bodies back to a prior evolutionary state, and could suppress or even erase Quirks. Kai, taking the villain name Overhaul, regularly extracted Eri's blood and manufactured it into bullets, selling them to other villains. Despite being in pain, Eri remained with Kai so that he would not hurt anyone else but her.

One day, after having enough, Eri attempts to run from Kai and ends up bumping into Izuku Midoriya and Mirio Togata. Kai arrives and attempts to explain that Eri is his daughter and is being rebellious, but neither hero believes him. Eri pleads with Izuku not to leave her. However, when she sees Kai preparing to attack the heroes, she relents and goes back to him, though the heroes remain suspicious.

Izuku and Mirio inform their boss, Sir Nighteye, of the event, and he tracks down Eri in the Shie Hassaikai's base. Eri, meanwhile, longs to escape, as she never felt a kindness like Izuku's before and wanted to experience it again.

The police and heroes raid the headquarters, but Overhaul expected them and sends his subordinates to hold them off so he can escape with Eri and his research. Mirio rushes ahead to save Eri, and manages to get ahold of her and defend her from Overhaul and his subordinate Chronostatis' attacks. Overhaul attempts to guilt her into returning to him, but Mirio tells her that he is there to save her and will not let anything hurt her. Mirio wraps her in his cape to protect her, and then goes to hold off Overhaul. However, Chronostasis recovers and loads a Quirk-Destroying Bullet into a gun. He fires at Eri, knowing that Mirio will take the bullet for her. He does, and his Quirk is erased.

Izuku, Sir Nighteye, and Eraser Head arrive to help, and Mirio escapes with Eri. Eri considers the whole debacle her fault, and tries to rectify her mistake. She is captured by Overhaul, who tries to escape with her, but Izuku catches up and rescues her. He fights Overhaul with all of his power, with Eri rewinding all the damage to his body as the fight escalates and finally climaxes with Izuku defeating Kai.

Eri is rendered unconscious and taken to the hospital, put under quarantine due to the danger of her Quirk. After a brief coma, she wakes up, though still psychologically scarred by Overhaul's abuse and the insecurity that the Shie Hassaikai incident was all her fault.

Eri is kept in quarantine for a while until Izuku and Mirio are allowed to see her. Izuku notices that Eri is still hurting because of Kai, and requests that she be let out of the hospital for one day, during the school festival, so he can allow her to have some fun and maybe smile. The day comes and Izuku takes Eri to the festival. His class performs a concert, and Eri finally smiles and laughs for the first time, leaving Overhaul's mark on her behind.

Later, Eri is transferred to U.A. High School's A-1 dorm room. As her Quirk begins to return, she is kept with the heroes, especially Eraser Head, so they can monitor and keep Eri safe. Eraser Head announces that since Eri cannot stay in the hospital forever and is unable to return to her family (her mother abandoned her and her uncle is unconscious), she will be adopted by U.A., to Izuku's surprise and Ochaco and Tsuyu's delight. Mirio says that Eri's horn (the source of her Quirk) is starting to grow back, so she needs to be monitored and trained with Eraser Head keeping her Quirk in check.

For months, the U.A. staff conducts research on Eri's Quirk. After the Joint Training Battle, Neito Monoma is called in to use his Quirk, Copy, to copy Rewind. He grows a horn like Eri's, but is unable to use Rewind. In a moment of sincerity, Neito explains that Copy can mimic the functional uses of a Quirk, but is unable to copy Quirks that store energy such as Rewind or One For All. He apologizes that he couldn't help any further but Eraser Head accepts. Eri apologizes for causing everyone trouble, saying that it would be better if she didn't have her Quirk. Izuku tells her that it isn't true and her power saved his life, explaining with the metaphor of a knife being dangerous but also capable of making amazing food, and her power is just as amazing. Feeling comforted, Eri tells him that she'll try her best after all.

Eri celebrates Christmas with Class 1-A by wearing a Santa outfit, though likely due to her sheltered life she has little understanding of holiday traditions, saying "Tricky Treat" as if it were Halloween. Ochaco and Tsuyu comment that her outfit looks cute, while Izuku notices that her horn has grown bigger. Shota tells him that because of his encouragement towards Eri earlier, she took his words to heart and became more optimistic and healed. At New Year's Eve, Izuku visits his mother Inko, showing her a letter that Eri wrote thanking him for inviting her to the school festival, causing Inko to cry tears of joy. Later, Eri's horn growing much larger than before and she cries in distress. Mirio and Tamaki Amajiki alert everyone about Eri, while Nejire Hado comforts her and Eraser Head disables her Quirk. He pats her head and telling her that she will be alright.

During the Paranormal Liberation War, Eri and All Might watch the destruction of Jaku City being broadcasted on TV. Mirio was informed about the war by Bubble Girl and wanted to help, so he asked Eri to restore his Permeation Quirk after she had recently been able to use Rewind with success. He apologizes to her for using her like her captors did, but Eri does so without hesitation, saying she's been motivated to train in order to repay him. Mirio gives his thanks to Eri as he returns to fight alongside the Pro Heroes once more.

Rewind: Eri's Quirk allows her to rewind the state of a living being, this includes her reverting a person's age and, as shown with her father, being able to rewind a person out of existence. She is able to use this power to revert injuries as well as allow Midoriya to use One For All: Full Cowl - 100% by preventing the power from harming him. Aizawa also remarks that Rewind could be used to help restore Mirio's Quirk. When active, an unknown energy flows from the horn on Eri's head. This Quirk was not present in Eri's blood line and is instead a result of an extremely rare genetic mutation.

Due to her young age, Eri has no control over her Quirk and fears it harming others. It's dangerous power makes it difficult to train, given that it can only be used on living beings. After training with the help of Aizawa, Eri was able to use Rewind with success by practicing on bugs and lizards. At Mirio's request, Eri successfully restored his Quirk. 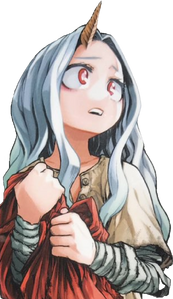 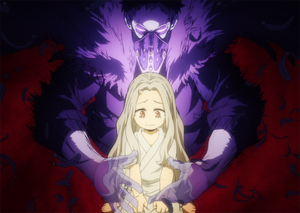 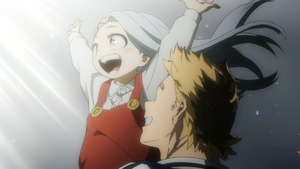 Eri smiles for the first time. 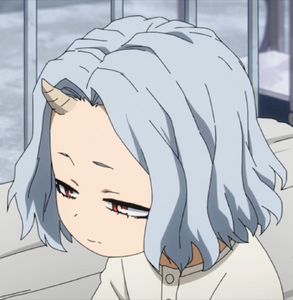 Eri as a toddler. 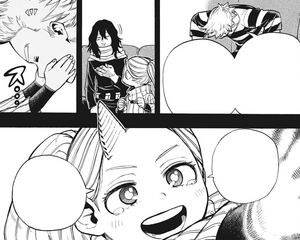 In gratitude towards Mirio, Eri happily restores his Quirk. 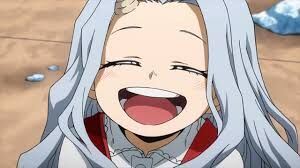