Eric
The Late Great
Mr. Eric Draven
A Boy and His Bird
Ghost
Killer of Killers
The Avenger

Avenge the death and rape of his fiancee, Shelly Webster as well as avenge his own death and to kill Top Dollar (all succeeded).

Eric Draven is the title main protagonist of The Crow film and the TV series, The Crow: Stairway to Heaven who was a former rock guitar player in the band Hangman's Joke, who had a hit with the song "It Can't Rain All the Time".

He was played by the late martial arts actor Brandon Lee who was accidently killed on set of the film on March 31, 1993.

He was engaged to Shelly Webster, their wedding due to be on Halloween. But on Devil's Night before Halloween, a gang led by T-Bird attacks Shelley in their home and rapes her. When Eric walks in, Tin-Tin throws a knife into his spine paralyzing him. He could only watch them rape Shelly before being thrown out the window. A year later, a crow brings his soul back from the dead to avenge Shelly's and his deaths on T-Bird's gang.

Eric emerges from his grave on a stormy night, stumbling his way back home to his ruined apartment. There he has flashbacks of Shelley, and discovers that any wound he takes heals instantaneously. With that, he paints his face and sets out to kill the thugs who killed Shelly.

The crow first helps Eric locate Tin Tin, whom he kills with his own knives and steals his trench coat. He then goes to the pawn shop where Tin-Tin pawned Shelly's engagement ring. Eric forces the owner Gideon to return it before blowing up the shop.

He then finds Funboy, T-Bird's right-hand man, getting high on morphine with Darla, the mother of Eric’s friend Sarah, and drags him into the bathroom before putting him into the bathtub; he then tells Sarah's mother Darla that she needs to be there for her daughter, before killing Funboy with his own needles. Eric then kidnaps T-Bird while T-Bird is waiting for Skank at a convenience store and kills him.

After Eric takes down three of the four thugs, the fourth one, Skank, runs back to Top Dollar, the head of a major crime syndicate and warns him about this undead avenger. Eric arrives and asks Top Dollar for the thug, only to be met with gunfire. Eric is forced to kill the entire room full of mobsters in order to fulfill his revenge.

Afterwards, Eric's powers begin to fail, as his role on Earth has been fulfilled. He is briefly called back in order to take down Top Dollar, who has kidnapped his friend Sarah. Eric fights Top Dollar on the roof of a church and manages to gain the upper hand by transferring the memories of pain that both he and Shelly had to endure into the mind of the top-level criminal. Top Dollar then falls to his death. Eric is finally able to rest in peace after this. 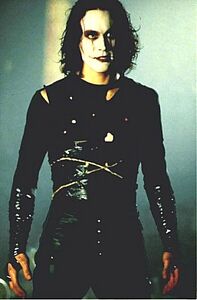 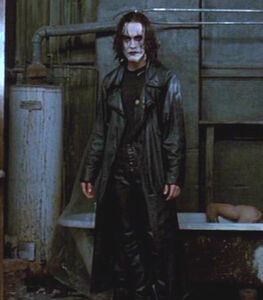 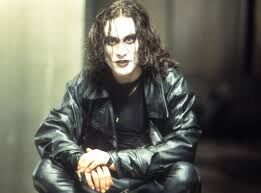 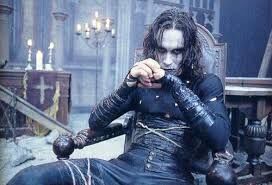 Add a photo to this gallery
Retrieved from "https://hero.fandom.com/wiki/Eric_Draven?oldid=2281455"
Community content is available under CC-BY-SA unless otherwise noted.