Use her cruise ship to destroy monsters, and carry on her great-grandfather's legacy (formerly).

To be with Dracula (succeeded).

Ericka works as the captain of a luxury cruise ship and is the great-granddaughter of the monster hunter, Abraham Van Helsing.

She is voiced by Kathryn Hahn.

On the outside Ericka is flirtatious and charming towards those she meets. However, on the inside Ericka holds onto much darker motives. During her childhood, Ericka was taught to believe in her duty as a monster hunter.

Because of this, she grew to feel nothing but disgust towards monsters.

However, after spending time with Dracula & falling in love with him on the Legacy cruise ship, Ericka came to realize that humans and monsters, weren't so bad after all. She and her great grand-father made peace with the monsters.

Inspired by her family's legacy, Ericka was determined to succeed where her great-grandfather, had failed and finally destroy Dracula.

Ericka appears by doing acrobatics in front of the crowd and lands onto the Crow's nest, and happily greets everyone by speaking in different languages. After Dracula zings with Ericka, she waves hello to the monsters, notices Dracula staring at her and starts to flirt with him.

After Ericka had finished flirting with Dracula, she slips away into an underground part of the ship. As she enters the room, she drops the "nice and silly act" and just feels disgusted around Dracula and monsters.

After a lot of failed attempts to try and kill Dracula, Dracula nervously got up the courage and asks Ericka out on a date which she agrees to go with Dracula and she tells him to meet her at midnight, at a restaurant.

At the restaurant, Ericka tries to poison Dracula while feeding him chips with guacamole (which Ericka had already poisoned, the guacamole with garlic). When Drac eats the chips covered in guacamole, however, he lets out a large toot.

After a failed attempt to kill Dracula, Ericka learns that Drac had never been on a date, ever since his wife had passed away, and Drac had to raise Mavis, on his own.

Ericka listens to this and immediately feels sorry for Dracula, & reveals that she never knew her parents, and only her great-grandfather raised her, and that she had lived on the ship, all her life.

Dracula reassures Ericka that everything will be ok, and not everything in life is perfect, and they both have to honor the past, but still they do make their own future.

Upon these words by Dracula, Ericka begins to fall, in love with Dracula. Before Drac and Ericka could share a romantic kiss, Mavis interrupts them, which makes Ericka leave the restaurant, embarrassed by Mavis Dracula showing up and ruining, the romantic moment.

In the morning, after explaining to Abraham about a feeling, when she was with Dracula at the restaurant, and after knocking Wayne and Wanda out, Ericka's great-grandfather tells her to fetch the Instrument of Destruction, when the monsters reach their final destination, Atlantis.

Once the monster arrive at Atlantis, and when the monsters go into the city, where they all start to do gambling, Ericka disguises herself as a local tourist, while Drac follows her (And not long after), Mavis follows them, as well suspiciously.

When Ericka gets to a small lake, Drac covers his eyes, as Ericka begins to undress herself, into a sleek swimming outfit, and she dives into the water, and she swims into the water, as Drac follows after her underground, and Ericka emerges in a abandoned throne room.

Then, Ericka steps onto a bobby trap, and an axe swings out from behind the wall, but Dracula caught the axe just before it can hit Ericka.

After Drac saves Ericka from another axe, she tests him by deliberately setting off every trap that she steps on while count dives in to save her.

After a dance and a moment between them, Ericka gets the Instrument of Destruction, but when she grabs it the throne room begins, to collapse around them. Dracula swoops up Ericka, just before a piece of the ceiling almost fell on her, as Dracula and Ericka narrowly escape the throne room, and rocketed out of the water, and onto the sand.

After their narrow escape out of the throne room, Ericka notices an axe stuck in Drac's head, but as she tried to pull it out, Mavis appears, looking shocked and horrified, at the sight of her father, being "injured" by Ericka.

Angered by this, Mavis uses her powers to lift up the captain, and physically restrain her, from hurting Dracula.

When Drac reveals that he zinged with Ericka, Mavis was in shock, that she dropped Ericka onto the sand. After Ericka picked herself off the sand, she asked Drac and Mavis what a "Zing" was.

Drac explained that, it was a "love at first sight for monsters", but Ericka rejects Drac's feelings by telling him that she couldn't never be with a monster, like Drac.

When Ericka's great-grandfather traps the monsters, Ericka sadly walks up to the DJ booth, and reveals that she is Ericka Van Hesling, the great-granddaughter of Abraham Van Hesling. With that, Abraham opens the Instrument of Destruction, and brainwashes the Kraken to destroy, the monsters.

After Dracula and Mavis are caught in the Kraken's tentacles, and begins to violently suffocate Dracula, Ericka couldn't bear to watch Drac get hurt, so Ericka jumps off the DJ booth, (much to Abraham's shock and surprise) and jumps onto Tinkles, and using her martial art skills, kicks the Kraken in the eye, making the large sea creature growl in pain, as Ericka watched a lifeless Drac, fall from the sky.

Ericka jumps off the massive Tinkles and catches Dracula in mid-air, and they both hang onto a ledge, while Ericka tells her great-grandfather that he is wrong about monsters, and that Abraham must learn to love and respect them.

As Abraham starts to get angry, Ericka confesses to Drac (Which Drac was still unconscious), that she was trying to kill him, but she realized that she was wrong about killing monsters, and that monsters do love each other. Then, she exclaimed that she knows all of this, because she also zinged, as well.

At the moment, Drac's eyes opened, surprised that Ericka had zinged with him. When Abraham bashes the two people off the ledge, Dracula was holding Ericka, by stating it was time to start a "A monster-human legacy", while Ericka and Dracula looked romantically into each other's eyes.

After defeating her great-grandfather, in a DJ battle hosted by Johnny, and was the monsters were all dancing to the Macarena, Ericka looks into Drac's eyes and says to him, that he is so amazing, and then they zinged again!

A month later, back at Hotel Transylvania, Dracula and Ericka (Which now are girlfriend and boyfriend), sneak past their family and friends, and they both make their way, to the hotel's rooftop (Which Johnny and Mavis were, in the 1st film), and Drac asked Ericka to marry Dracula.

After stammering nervously, Dracula, Mavis, Jonathan, Dennis and all the other monsters, were waiting eagerly for Ericka's answer, then Ericka blurts out happily: "YES!". While the monsters cheered, Drac slips the ring onto Ericka's finger, as Drac and Ericka share a romantic hug, while Tinkles chase after them. 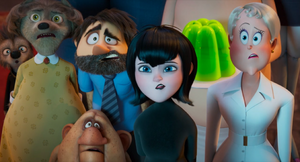 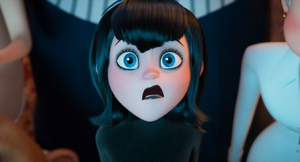 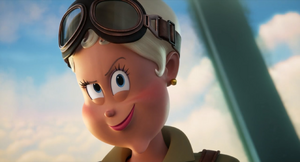 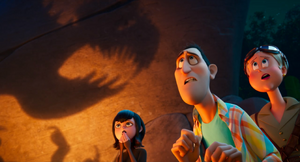 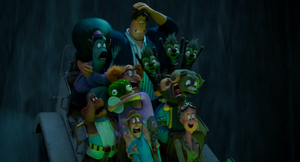 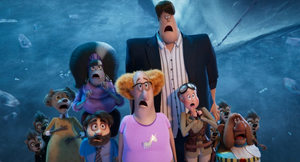 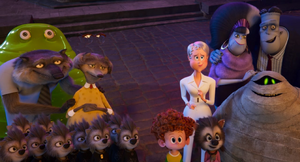