My dear daughter (by her father)

Erina Nakiri is a anti-hero-turned-the deuteragonist of Food Wars and is the main antagonistic rival to Sōma Yukihira. Wielding the best palate in the world, "God's Tongue" and a member of the illustrious Nakiri family, Erina stands above everyone in her class as the top prospect of the 92nd Tōtsuki Generation and is a former 10th seat of the Elite Ten Council.

After her mother abandoned her, Erina was sought out as a tool after being abused by her father, Azami Nakamura, due to his insolence to create his "true gourmet" to Totsuki that once ruined his senpai, Jōichirō Saiba caused her maternal grandfather Senzaemon announced Azami's exile. She was raised by Senzaemon as an orphan to fully heal her from her trauma, but the damaged was still undone yet.

After Azami returns from his exile, her cousin, Alice, helped her to leave the Nakiri Mansion and was taken into Polar Star Dormitory by Megumi Tadokoro for her safety from Azami. During her time in Polar Star, she insisted to join the rebels against Azami and Central as well resigning as a member of the Elite Ten.

During the final bout, she and Sōma Yukihira win the Regiment and ended her father's tyranny for good as she broke free from Azami's evil influences. After her father, Azami banished from the academy again, She was appointed as the new headmaster by her grandfather, Senzaemon Nakiri despite of her age. After 4 months becoming the new headmaster, she restored Tōtsuki back to its former glory and reinstated all Research Societies as well returning all students who were expelled by Central. She will punished anyone who is a threat to her administration. However, a group of threats called the Dark Chefs who are considered to be even beyond than her father, Azami had appears to carried out what Azami had failed to attempt by close restaurants in the Culinary world. She assigned Sōma and Megumi deal with a dark chef in Hot Springs Town. As she found the identity of the leader of the Dark Chefs, she learned that the leader, Asahi Saiba want to marry her. She participated the tournament known as BLUE. However, her mother, Mana (who had abandoned her during her childhood) appears to try to eliminate her from the tournament. Her birthday is June 30.

Erina has purple-pinkish eyes and long honey blonde hair that flows just above her lower back. Her side bangs partially cross her cheeks and go down all the way to her neck. She has a large bust and is considered by most of the students in Tōtsuki to be extremely beautiful. According to her fans and followers, this trait coincides with her status.

She wears whatever Tōtsuki uniform corresponds with the current season. Whenever she cooks, she wears a standard white chef's uniform and occasionally wears a chef's hat. She has never been shown in casual clothing except for a cotton jacket and a bikini during her pool outing and a simple nightgown when sleeping.

On the surface, Erina is a typical privileged and pampered rich girl, used to getting only the best in her life. With her status as a Nakiri family member on top of her rare ability "God's Tongue", Erina deems almost everything and everyone as plebeians in her "perfect world". Despite her young age, she is a prominent figure in the culinary world and is a cooking prodigy. Erina's cooking skills are on par with most professional chefs, if not better than most, something that started as a young girl. Using her God's Tongue, she has earned a bit of infamy in the culinary industry, as any dish that she deems unsatisfactory shall spell the end of any chef's career. Her reputation is so well known, her name alone is able to scare off amateur chefs within seconds. At the same time though, Erina's influence attracts many in her class due to her beauty, prestige, and unrivaled skill. Due to her prodigious skills, she is confident, never showing any sort of fear and has completed every event in the school thus far with ease.

Erina's father subjected Erina to a particularly brutal regimen as a child, causing her personality to become cold and ruthless towards any sort of dishes that use cheap ingredients or use "plebeian tactics." She is not above criticizing others the minute they make a mistake or treat her unjustly in her mind. This also makes her prone to making hasty judgments about simplistic dishes without ever considering them worthy of her time. Even if the said dishes are delicious, Erina's immediately denies them from her "perfect world." Much of this stems from her father's "teachings" in which any dish with poor taste is considered garbage. She has spiteful tendencies as any person who ruins her image and demeanor immediately becomes a target for her. Erina likes to flaunt her titles and status over her less privileged classmates, mostly towards her main rival and antagonist, Sōma Yukihira. Still, Erina is more than willing to listen to others' advice and opinions and is generally polite to people unless they annoy or insult her.

Despite her proud demeanor, she does have a soft side, which was more apparent in her childhood. In more recent times, this has only been shown whenever her idol, Jōichirō Yukihira, is on her mind. She lacks common teenage girl behaviors, such as romances and relationships. She considers a girl walking home together with a boy and even a couple holding hands as "shameless". She does not know how to handle free time as a "normal girl" would and, as Alice would say, she lacks common sense. For example, she has no clue where to buy shojo manga because Hisako always buys them for her and they are not found in her grandfather's study. Erina does have some traits of a normal girl, including her liking towards shōjo manga, playing card games, and othello. In her first days in Polar Star Dormitory, Erina experienced a bit of culture shock as simple everyday tasks such as doing her own laundry were new to her. Through her time at Polar Star Dormitory, she learned how to perform most basic home chores such as laundry, even memorizing the various laundry symbols that can be found on tags.

Though she is normally confident and often haughty, Erina has only showed strong fear when in the presence of her own father. This fear has caused her to be extremely submissive in his presence, unable to vocally stop any of his actions that impact her, no matter how much it upsets her. This includes claiming the table she had kept in reserve at her Moon Banquet Festival booth just for Jōichirō as well as firing Hisako from her position as her secretary. Though she had nearly ten years without her father's brainwashing and exposure to much more kind individuals, her father's grip on her heart was retained when he returned years later. However, it seems that this grip has lessened thanks to her time spent in Polar Star, enough so for her to willingly defy her father and fight to take down his regime with the help of her fellow 92nd Generation standouts. 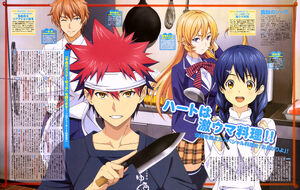 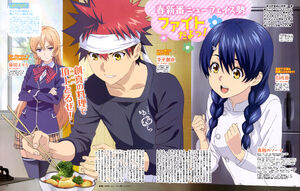 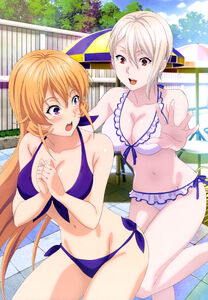 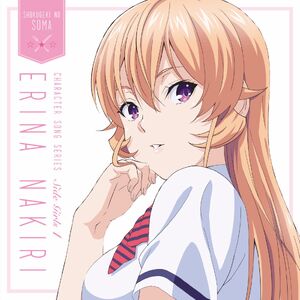 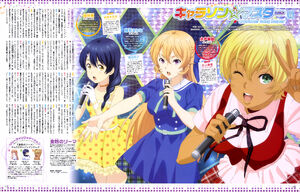 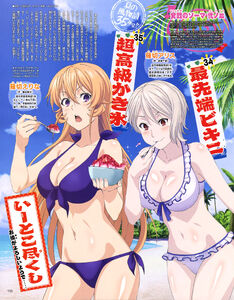 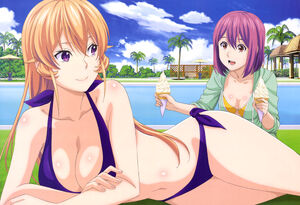 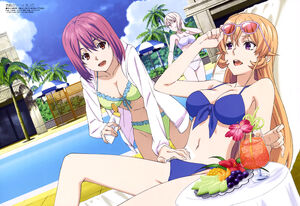 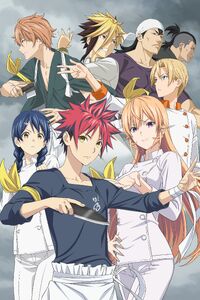 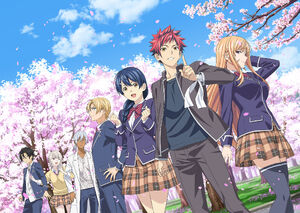 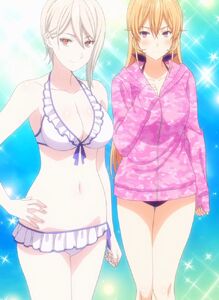 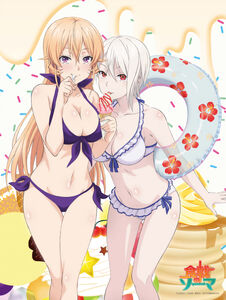 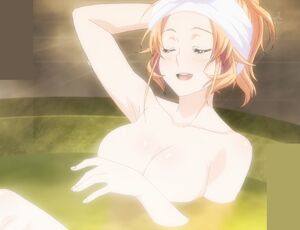 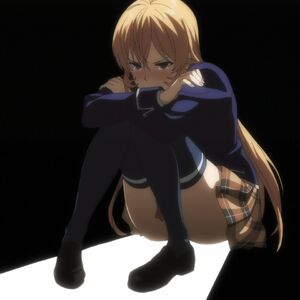 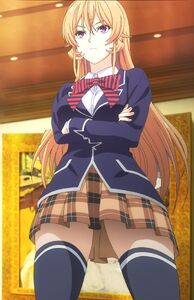 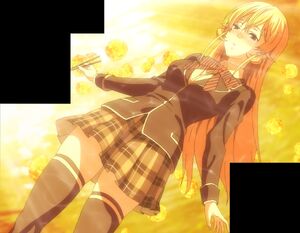 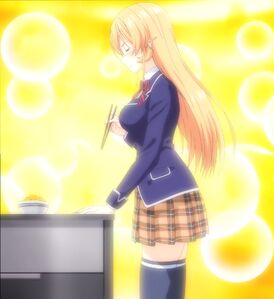 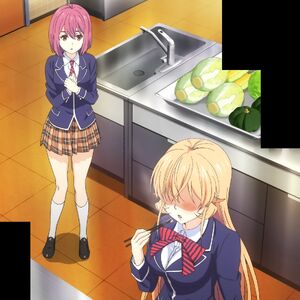 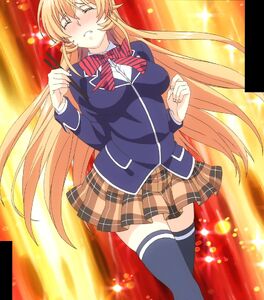 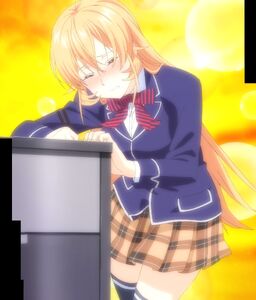 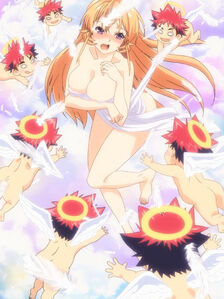 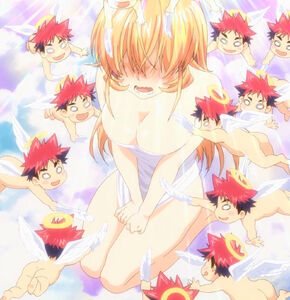 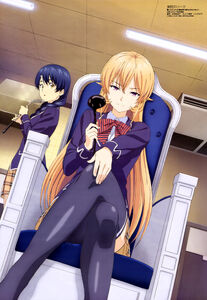 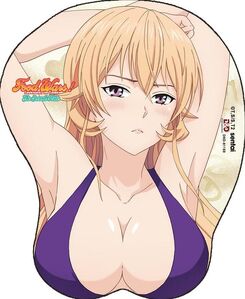 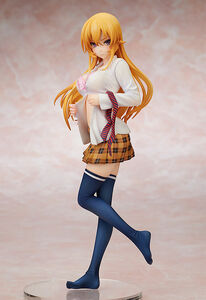 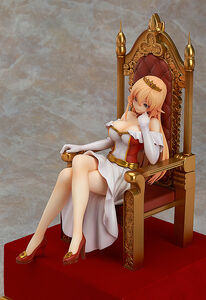 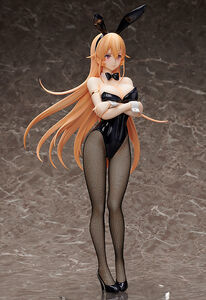 Add a photo to this gallery
Retrieved from "https://hero.fandom.com/wiki/Erina_Nakiri?oldid=2245553"
Community content is available under CC-BY-SA unless otherwise noted.