Goddess of Fortune (as Eris)

Stealing from corrupt nobles and giving the earnings to the Eris Order.
Hanging out with friends.

Retrieve all the divine relics lost in the World (ongoing).

Eris (In Japanese: エリス, Erisu), also known by her human alias Chris (In Japanese: クリス, Kurisu), is a major supporting character in the light novel, manga and anime series KonoSuba: God's Blessing on this Wonderful World!. Eris has a minor role in the crossover anime Isekai Quartet, which features characters from several properties of the "Isekai" genre of anime.

She is the benevolent Goddess of Fortune who watches over the fantasy world in which KonoSuba takes place, and has the largest following of any deity in that world. Her main assignments include ferrying the dead of the fantasy world into their next life.

Eris often travels down to the fantasy world to have fun, where she assumes the identity of a young thief girl named Chris. She is close friends with Kazuma Satou, the main protagonist of the story, who seems to be in love with her.

She was voiced by Suwa Ayaka in the Japanese version and Kira Buckland in the English version.

Although her exact age is unknown, Eris possesses the physical appearance of a young teenage girl. Kazuma Satou has described her as the most beautiful woman he has ever seen, and many others have had their breath taken away by her astounding beauty.

Eris has beautiful purple eyes and a scar on her right cheek that she apparently received while battling the Demon King's army, which she usually covers up with makeup. Eris has long silver hair going down to her ankles which has a light purple ombre. She has two long bangs which reach down to her shoulders and an ahoge sprouting from her fringe.

Although she is incredibly beautiful, Eris is not very buxom when it comes to the chest area. As such she usually wears breast pads in an attempt to imitate having more favorable assets.

Eris usually wears a purple coif on her head which matches the shade of her eyes, as well as a matching white and purple one-piece dress with yellow trimmings which goes slightly passed her knees. She also wears purple shoes and white stockings, as well as a necklace with a pink diamond-shaped jewel in its center.

Chris has short, silver hair which has a light purple ombre of a sort, and beautiful purple eyes. Her hair is very messy, having two long bangs which reach down to her shoulders as well as an ahoge protruding from her fringe. She has a rather slender-physique with modest assets, which, accompanied with the way she dresses and acts, often makes strangers mistake her for a boy. Instead of covering up her scar like she does as Eris, Chris leaves her deep-cut entirely visible.

Chris usually wears a fairly revealing outfit, an attire common among females of the rogue class. Her outfit consists of a light blue scarf, a short green cape which goes down to her elbows, a pair of black elbow gloves with normal brown gloves layered over them, short blue jean-shorts, white knee-high socks with a blue trimming, brown boots, and a bikini-like grey top.

Ever since her first run-in with Kazuma, Chris has worn black leggings in case her panties are stolen again. She also wears diamond-shaped blue earrings and usually has an enchanted dagger fastened to her butt.

Eris is a very kind and gentle girl who treats others with kindness and respect. She is also very caring and she always interests her adherents. She has a very cheerful attitude but at times can act a bit childish. She is insecure about her breast size and uses breast pads to compensate. Aqua often embarrasses her with this knowledge, as Eris wants as few people as possible to notice her lack in bust. As a result of her kind-hearted and gentle nature, her scent is noted to be very fragrant. She has a habit of scratching the scar on her right cheek.

While disguised as Chris, she displays an even more cheerful and energetic demeanor that is almost always seen with a big smile and boasting a bright personality. Though befitting her role as a thief, she at times acts quite childish and mischievous when around the prospects of treasure.

However, when around Demons and Undead, her personality takes a drastic change. She becomes incredibly cruel and violent towards any Demon she encounters, and will attack and attempt to kill them without thought or mercy, not even taking into account whether or not the Demon in question is good or evil.

Eris is the immortal Goddess of Luck and Fortune who presides over the world in which KonoSuba takes place. As such Eris is the main deity worshiped by the people of this world, even having the currency named after her. When anyone from the world of KonoSuba dies it is Eris's job to guide them into their next life, whether it be going to Heaven or reincarnating.

Although she is the most worshiped Goddess in the fantasy world, Eris is still the underling of Aqua, whose more fanatical followers give her more power. Aqua would often make Eris do her work for her.

One day, one of her worshipers by the name of Darkness prayed to Eris, asking for friends to adventure with. Taking pity on Darkness, Eris granting her request personally by descending to the world as the thief Chris. Eris, as Chris, would occasionally go on adventures with Darkness, never revealing her true identity to anyone in the fantasy world.

Eventually, a young man by the name of Kazuma Satou chose Aqua to be his divine relic, and as such she was banished to the fantasy world with him until he could complete his task of slaying the Demon King. Eris found herself fascinated by Kazuma, often peering into his adventures to see how he and Aqua were doing.

Eventually, when Darkness tried to join Kazuma's party, Eris, as Chris, introduced herself to him and offered to teach him some thief skills for a drink, which he gladly accepted. Chris demonstrated how to use the skill "Steal", which steals a random item from a target, by stealing Kazuma's money pouch.

Chris told Kazuma to use "Steal", and promised him that he could keep whatever he took from her. Unfortunately for Chris, Kazuma managed to steal her panties, which Chris was only able to get back after she handed over his coin pouch and all the money she had on her.

Sometime later Kazuma was killed in battle against the Winter Shogun. Naturally, he appeared before Eris like all others. Upon seeing the man she was so fond of pass away, Eris offered Kazuma her heartfelt condolences. Eris promised Kazuma a new peaceful life, as a young rich boy in Japan, for all the hardships he had faced.

Kazuma happily accepted Eris's offer, however before Eris could send him to his new life, Aqua ordered her to return him to the fantasy world. Eris, despite being ordered by a superior, refused to resurrect Kazuma, as it went against the rules of the Afterlife. However, Aqua threatened to tell everyone that Eris pads her chest, which made Eris give in. As she bed farewell to Kazuma she asked him to keep what Aqua had said about her chest a secret.

The Destroyer and Kazuma's Trial

When the Mobile-Fortress Destroyer set its sights on Axel, Chris was one of the adventurers who believed the town should be completely abandoned. However when she learnt Kazuma and his party were planning to stay behind she decided to help in anyway she could, asking Kazuma if he had any idea on how to stop it.

After the battle with the Destroyer, Chris was asked to participate in the trial of Kazuma. The prosecutor asked Chris about the incident when Kazuma stole her panties. Chris affirmed that he did steal her panties, however before she could tell the prosecutor that the whole event was an accident she was removed from the witness stage.

A short while later Chris came to the Guild after she heard that Kazuma was paying for everyone's drinks. Unfortunately at that moment Kazuma was demonstrating "Steal" to the other adventurers and accidentally stole Chris's panties again, much to Chris's chagrin.

A short while after Kazuma managed to clear his name he was once again killed, this time by falling out of a tree. Eris warned Kazuma to be more careful in the future as it hadn't been easy for her to find a excuse to tell the higher-ups for his previous resurrection. She also told him that she occasionally goes down to the fantasy world for fun, while not actually telling him her identity as Chris.

Kazuma once again asked Eris if he could be reincarnated back in Japan, despite Aqua's pleads for him to return. Just as he made up his mind, Aqua revealed that his companion Megumin was going to perform sexual acts on his corpse if he didn't return soon. Eris giggled seeing Kazuma in a flustered state, before sending him back to the fantasy world.

Eris, as a Goddess, has various physical traits that far exceed any normal human limitations. Among these abilities is Immortality, which allows her to keep the appearance of a young and beautiful woman for all of time. Furthermore she is capable of transporting people's souls into new or existing bodies, such as when she reincarnates a hero. She can even manipulate the events of that person's future life to a certain extent, and can witness events in the mortal world as if she were there. Lastly, Eris can traverse to the mortal plains by creating a mortal body to inhabit, which is how she is able to adventure as Chris. Unfortunately, while inhabiting a mortal body as Chris, Eris can not use any of her divine powers and doesn't emit a divine aura.

As Chris, Eris is a member of the "Thief" class, which gives her access to Rogue skills. Furthermore, as the Goddess of Luck, Chris has the highest luck characteristic in the fantasy world. Her luck stat is so high that her adventurer card glitches when asked to display it, she was even able to beat Kazuma in a game of rock-paper-scissors, despite him having incredibly high luck as well. 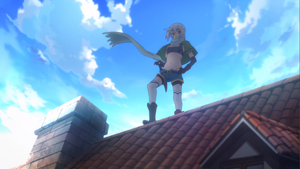 Chris in the KonoSuba season one opening. 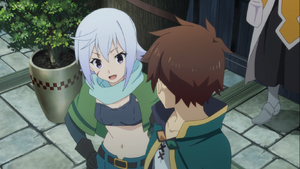 Chris asking what Kazuma's plan is. 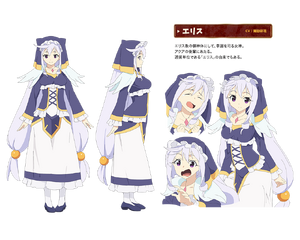 Official art of Eris in the anime.
Add a photo to this gallery

Retrieved from "https://hero.fandom.com/wiki/Eris_(Konosuba)?oldid=1848591"
Community content is available under CC-BY-SA unless otherwise noted.