Princess of the Eagle Tribe

Free the Legendary Beasts from the Crawlers(succeeded)

Eris is an Eagle Tribe warrior in Chima. She is a princess and warrior of the Eagle Tribe, and the daughter of Ewald. She wields a axe-like golden weapon known as the Eglaxxor, with an orb of Chi on both sides.

She was voiced by Bethany Brown.

While many Eagle Tribe members can be a bit “airheaded,” Eris is always extremely focused and quick-witted, which is probably why she spends more time with the earth-bound creatures (like Laval) than those who live in the clouds. She loves adventures and puzzles, and can spin a yarn like no other creature. She is also an extremely strategic fighter. What she lacks in strength she makes up for with smarts. You have to fight Eris with both your body AND your mind because she always has a trick or two up her wings. She’s never mean-spirited... unless provoked. Typically, she’s the first to lend a hand, and the last to leave a friend in need. You can always count on Eris. Just don’t let her corner you and tell you jokes – a lot of them aren't as funny as she thinks they are. 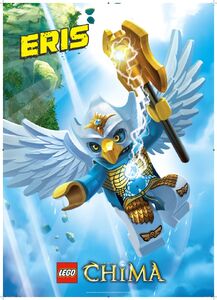 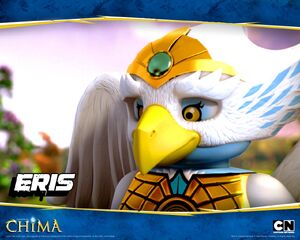 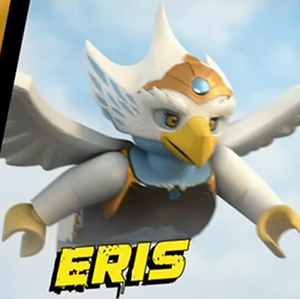 Retrieved from "https://hero.fandom.com/wiki/Eris_(Legends_of_Chima)?oldid=1840728"
Community content is available under CC-BY-SA unless otherwise noted.