Erlang Shen or Erlang, is a popular Chinese God with a third-eye on his forehead. There are many different versions of Erlang Shen but perhaps the most widely accepted one is Yang Jian. Yang Jian was known as the nephew of the Jade Emperor, ruler of the Gods in Heaven, being the offspring of the Jade Emperor's sister and a mortal. He is also the greatest and most powerful Warrior God in Heaven, as well as one of the most popular Chinese Gods, being second to the Goddess of Mercy in terms of popularity.

Erlang Shen directly translates to 'Second Son God'. 'Er' means 2, 'Lang' means 'Boy'/'Son' and 'Shen' means 'God'. His mother, Princess Yaoji was the goddess of the desire realm in Heaven, charged with the duty of limiting Gods' mortal desires such as love/affection, greed and ambition. While she pursued an evil Dragon who had escaped from his chains in the heavenly prison, she fell in love with a mortal scholar, Yang Tianyou, who was willing to use his own heart to save her after hers was damaged by the Dragon. They married and had three children: Yang Jiao, Yang Jian and Yang Chan.

When the Jade Emperor discovered her marriage, he sent his the heavenly armies to kill the half bloods, the mortal man, and the goddess of desire realm. Only Erlang and his sister Yang Chan survived. Yang Jian then went on to search for a worthy teacher that could impart to him the necessary skills and power to save his mother. Meanwhile, the Jade Emperor imprisoned Yaoji under the Peach Mountain as punishment. Years later, the grown-up Yang Jian cleaved Mount Peach using his axe, hoping to set his mother free. Unfortunately ten Sun Gods (the Jade Emperor's sons) arrived and burnt her to death. Overcome by rage and grief, Yang Jian killed nine of the sun deities, but was persuaded to release the last Sun by the Moon Goddess Chang'e. Later Yang Jian would play a pivotal role in managing a massive flood that was going to overcome the surface, and thus was canonized as a God.

Erlang Shen a.k.a. Yang Jian, is mostly portrayed, whether in ancient legends or games or television, as a noble and powerful Warrior God who slays and vanquishes Demons and Monsters in the mortal realm and who embodies justice and righteousness.

Superhuman Strength: Erlang has vast, incredible super-strength of undefined limits, being able to cleave an entire mountain with his axe in one fell stroke, in order to save his mother, as well as singlehandedly battling multitudes of Demons and Heavenly Soldiers with much ease. His weapon, the '3-Pointed Double-Edged Lance', is also said to weigh 27500 jin (equivalent to nearly 13 tons) and yet he is able to lift it and wield it easily. Ancient Legends have also portrayed him as being able to lift ten or more colossal mountains on his back.

Mystical Abilities: Erlang Shen is capable of 72 Transformations(sometimes said to be 73 Transformations), granting him the power to shape-shift and transform into virtually anything that he wants. He is also capable of performing various Magic Spells for various uses, such as immobilizing enemies, withstanding Fire and Water without any ill-effects, as well as telekinesis and energy projection.

Superhuman Durability: Erlang Shen, due to his Godly heritage, has superhuman durability and endurance far surpassing that of Mortal Men. He also has a unique skill known as the "Nine Turns Complex Skill" -  which grants him vast, superior physical durability of undefined limits and nigh-invulnerability to conventional weapons and various magic spells. In the novel "Creation of the Gods", Erlang was shown to be completely immune to hits from various powerful mystical objects due to this skill, while his comrades were either severely injured or knocked unconscious. The Nine Turns Complex Skill makes Erlang Shen nigh-invulnerable, having a practically indestructible body many billions of times stronger than the strongest steel, being completely immune to any diseases, poisons, water, fire, explosions and magic and is capable of turning him into a super soldier of unmatched strength and endurance.

Master Warrior: Yang Jian, being the greatest Warrior God in Heaven, is of course tremendously skilled in martial arts, be it armed or unarmed combat, and is a deadly and powerful warrior.

His main weapon of choice is his "Three-pointed, Double-edged Lance" - a long three-pointed Spear with two cutting edges of a Saber. This Spear is powerful enough to penetrate and cleave through steel and stone like wool. Erlang wields the Lance with considerable skill and unmatched mastery, able to engage Sun Wukong in combat for over 300 rounds and gain the upper hand. Erlang also appears to be very skilled in Archery, as in Journey to the West, he is seen using his bow to subdue opponents a number of times.

Erlang Shen has used his Divine Spear and slain many Gods, Demons and Evil Spirits with it, along with a variety of terrifying Mythical Beasts, such as Dragons and Phoenixes. The Spear is also used by Erlang as a conduit to channel his phenomenal Godly energies, from creating an energy barrier to firing powerful energy blasts and long-range destructive shockwaves powerful enough tolay waste to mountains, split the sky and rend the earth.

Celestial Hound: Erlang is almost always accompanied by his faithful 'Howling Celestial Dog' - a mystical Hound which has the ability to attack and subdue Demons. This ferocious hound helped its master when he was fighting Sun Wukong, by biting him on the leg. It can also howl and roar ferociously, releasing deafening and destructive Shockwaves that can shake even Heaven and Earth as it does so, hence giving it its name.

Electrokinesis: Erlang Shen has the ability to execute 'Heaven's Punishment', an ancient skill which only exceptionally powerful Gods are able to carry out. It involves calling down numerous devastating, destructive bolts of Divine Lightning to destroy and incinerate the wicked. Erlang Shen has demonstrated the ability to call down storms complete with raging hurricanes along with many bolts of hundreds of millions of watts of lightning to lay waste to his enemies.

The third-eye on his forehead is the most prominent feature that distinguishes Erlang Shen from the other Gods in the Chinese Pantheon. It does not have a fixed name, though its most popular name is "The Eye of Heaven" - However, this third-eye is much more than just an abnormal facial feature.

Truth-Seeing: Erlang Shen's 'Heavenly Eye' has the ability to differentiate truth and lies, and observe the true personalities of others, whether good and honest, or scheming and evil. It can also be used to see through deceptions and disguising transformations (like Mystique's shape-shifting).

Tracking and Radar: Radar certainly hadn't been invented during Erlang's time, but there was no need to. The 'Heavenly Eye' has the ability to scan and detect any nearby incoming enemies, as well as view and track escaping enemies or people from vast distances.

Energy Projection: The 'Heavenly Eye' can also be used as an offensive weapon. It is able to fire massive continuous energy blasts of vast, incredible destructive power, usually used for single enemies of great power. It can also fire huge, obliterating energy blast waves for destroying massive armies of Demons in one go. The Eye possesses enough destructive power to utterly destroy and vaporize anything it hits, even powerful enough to shatter and disintegrate entire realms and worlds. The blasts are even powerful enough to overwhelm and defeat Gods and Demons with exceptionally powerful bodies, either completely destroying them or crippling them for life. 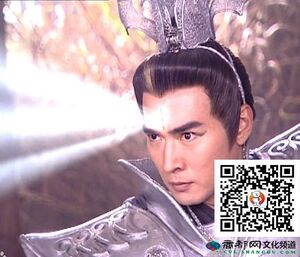 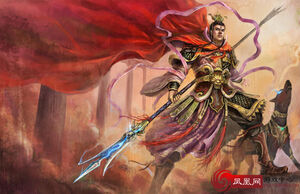 Add a photo to this gallery
Retrieved from "https://hero.fandom.com/wiki/Erlang_Shen?oldid=1966133"
Community content is available under CC-BY-SA unless otherwise noted.