Ernie is a humanoid muppet with orange skin from Sesame Street. His best friend and roommate is Bert, but sometimes annoys him with his actions, surprises and disturbances. His favorite toy is a rubber duckie, which he has a song he sings in honor of at bathtime. He always takes a rubber duckie with him almost anywhere. He was performed by the late Jim Henson, Steve Whitmore, Billy Barkhurst, and Peter Linz.

Ernie is well known for his fondness for baths with his rubber duckie, and for trying to learn to play the saxophone although he wouldn't "put down the duckie." Ernie is also known for keeping Bert awake at night, for reasons such as wanting to play the drums, wanting to count something (like sheep), to observe something like a blackout, or even because he is waiting for his upstairs neighbor to drop his shoes.

He has a distinctive, chuckling laugh (a trait he shares with his baby cousin Ernestine).

Many Ernie and Bert sketches involve Ernie wanting to play a game with Bert, who would much rather do something else (like read). Ernie keeps annoying Bert with the game until Bert joins in—and usually, by the time Bert starts enjoying the game, Ernie is tired of playing the game and wants to do something else. Other sketches have involved them sharing some food by dividing it equally, only for one of them to have a bit more than the other, leading Ernie to make it even by eating the extra piece.

Ernie has also frequently made appearances without Bert. He has regularly appeared in skits with Cookie Monster, Sherlock Hemlock and Lefty the Salesman.

From season 33 until season 36, he and Big Bird starred in a daily segment called "Journey to Ernie". Starting in season 39, Ernie and Bert have appeared in animated form in the Bert and Ernie's Great Adventures segments.

Ernie from 123 Count With Me 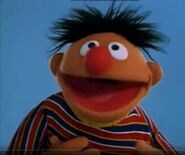 Ernie from The Adventures Of Elmo In Grouchland 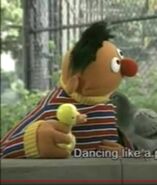 Ernie from What's The Name Of That Song?

"But first we better stop Dr Birdwhistle before he traps the quetzal."

"Enjoy the movie everyone!"

Retrieved from "https://hero.fandom.com/wiki/Ernie_(Sesame_Street)?oldid=1926143"
Community content is available under CC-BY-SA unless otherwise noted.