The One
God
He who is Alone
Father of All

Watching over and protecting his creations.

Keep creation under his control (succeeded).

Aid Gandalf on the quest to destroy the One Ring (succeeded).

The Ainur (Valar and Maiar)
Elves

Eru Ilúvatar is the overarching protagonist in J.R.R. Tolkien's Middle-earth legendarium, and is introduced in The Silmarillion and has a minor yet pivotal role in The Lord of the Rings.

He is the supreme being of the universe, creator of all existence. In Tolkien's invented Elvish language Quenya, Eru means "The One", or "He that is Alone" and Ilúvatar signifies "Father of All". The names appear in Tolkien's work both in isolation and paired (Eru Ilúvatar).

Eru was the supreme being, God. Eru was transcendent, and completely outside of and beyond the world. He first created a group of angelic beings, called in Elvish the Ainur, and these holy spirits were co-actors in the creation of the universe through a holy music and chanting called the "Music of the Ainur", or Ainulindalë in Elvish.

Eru alone could create independent life or reality by giving it the Flame Imperishable. All beings not created directly by Eru, (e.g., Dwarves, Ents, Eagles), still needed to be accepted by Eru to become more than mere puppets of their creator. The evil Melkor, who had originally been Eru's most powerful servant, desired the Flame Imperishable and long sought for it in vain, but he could only twist that which had already been given life.

Eru created alone the Elves and Men. This is why in The Silmarillion both races are called the Children of Ilúvatar. The race of the Dwarves was created by Aulë, and given sapience by Eru. Animals and plants were fashioned by Yavanna during the Music of the Ainur after the themes set out by Eru. The Eagles of Manwë were created from the thought of Manwë and Yavanna. Yavanna also created the Ents, who were given sapience by Eru. Melkor instilled some semblance of free will into his mockeries of Eru Ilúvatar's creations (Orcs and Trolls).

This does not belittle Eru at all, because he had already essentially created all these creatures' spirits before the Ainur breathed life into them (given to them by him) and made the spirits physical. This is why humans made the mistake of thinking the Ainur were gods, when they were not. All they had done was render Eru's realm physical. He had in fact created it in the beginning.

In the First Age, Eru created and awoke Elves as well as Men. In the Second Age, Eru buried King Ar-Pharazôn and his Army when they landed at Aman in S.A. 3319. He caused the road to Valinor and Valinor itself to be removed from the Earth, drowned Númenor, and caused the Undying Lands to be taken "outside the spheres of the earth".

When Gandalf died in the fight with the Balrog in Part I of The Lord of the Rings, named The Fellowship of the Ring, it was beyond the power of the Valar to resurrect him; Eru himself intervened to send Gandalf back.

Discussing Frodo Baggins' failure to destroy the Ring in Part III, The Return of the King, Tolkien indicates in Letter 192 that "the One" does intervene actively in the world, pointing to Gandalf's remark to Frodo that "Bilbo was meant to find the Ring, and not by its maker", and to the eventual destruction of the Ring even though Frodo himself failed to complete the task.

Eru may have been mentioned in this film by an orc interrogated by Legolas, Taurial, and Thranduil, who says, “My master serves the One!”, as "the One" is one of Eru's titles.

While this may mean Eru is evil in the films, this, however, is extremely unlikely, as Sauron established a completely dictatorial government, abolishing all other supreme beings, and therefore Sauron made any use of Ilúvatar obscene. The "master" the Orc mentioned is likely Azog, and Sauron wanted to be called a god, and "the One" would be a title for Sauron amongst Orcs, presumably as a mockery against Eru.

Peter Hastings, manager of the Newman Bookshop (a Catholic bookshop in Oxford), had written to Tolkien objecting to his writing of the reincarnation of Elves, saying:

In earlier versions of the legendarium, the name Ilúvatar meant "Father for Always" (in The Book of Lost Tales, published as the first two volumes of The History of Middle-earth), then "Sky-father", but these etymologies were dropped in favour of the newer meaning in later revisions. Ilúvatar was also the only name of God used in earlier versions — the name Eru first appeared in "The Annals of Aman", published in Morgoth's Ring, the tenth volume of The History of Middle-earth. 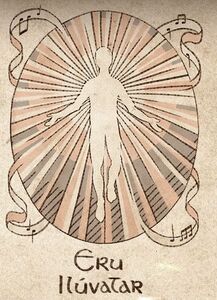 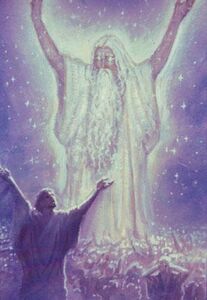 Eru Ilúvatar (middle) opposed by Melkor's (bottom left) discord of the Music of the Ainur.