Esme Hoggett is the wife of Farmer Arthur Hoggett and the owner of Babe the sheep pig who appeared in Babe and Babe: Pig in the City. She is the tritagonist in the sequel.

She was played by Magda Szubanski.

Esme Hoggett was first seen in the country fair with her husband Farmer Arthur Hoggett and her friends winning contest price they received. Arthur discovers a pig in a booth called "Guess My Weight" and guess it's weight, Esme calls him showing him another trophy she again won. Some time later she was cleaning her trophies she won and calls her husband that the phone is ringing. Arthur answers it and it turn out he won the pig and he goes to back to the fair to receive the pig which they later named him Babe. When a duck named Ferdinand is crowing, she tells Arthur that they have to do something about Ferdinand, then she feeds Babe, then harvesting some carrots. When Esme, Arthur and Rex the male sheep dog went for shopping, Ferdinand and Babe both get rid of the alarm clock which threatens Ferdinand and they succeed, but ends up waking Duchness the Hoggett's cat causing them to accidentally destroy the living room and covered themselves in paint. After the disaster Esme, Arthur and Rex return home, Esme was shocked seeing Duchness covered in yellow paint and the living room in a complete mess and they and Rex checks it and turned it was Ferdinand who behind the disaster. When Christmas arrives Babe was chosen for Christmas dinner but choose duck instead and the Hoggett's children and grandchildren arrive to spent with them. Babe discovered some sheep rustlers stealing their sheep and they failed to stop them, but has them arrested and the stolen sheeps we're return back to them. Rex gets into a fight with Fly for encouraging Babe, she was shocked when Arthur was accidentally bitten by Rex who was trying to break them up. One day a group of wild dogs attack the Hoggett farm killing a sheep named Maa and Babe was falsely accused by Arthur Hoggett and prepares to shoot him. But Babe was saved by Fly and Esme informs Arthur, she received a call from the police that they (wild dogs) attack the other farm owned by the Mitchells has lost 6 lambs that morning and she asked him why he was trying to kill Babe and telling him it was the wild dogs who killed Maa. During a stormy weather Esme leaves on a trip with her friends leaving some foods to Arthur, Babe and Duchness. Esme was in her friends' house watching the sheep dog contest and is terrified to see Arthur and Babe are participating in the contest causing her to faint and burst out crying as one of her friends comfort her, but she was delighted that they won the contest perfectly.

Esme was back home, where she joyfully hugs her husband Arthur after winning the sheepdog contest perfectly. A few weeks later after the victory, Arthur was accidentally injured by Babe, while fixing the well, Esme was unsuccessful of tending the farm along while her husband was recuperating. Soon two men from the bank arrives and informs her and Arthur that they did not paid their rent on time and they will soon be evicted. Esme finds a letter saying that Babe could enter a sheepdog herding contest, held at a fun fair far away. She decides to enter Babe on the contest and leave the farm together.

However at the airport in the city of Metropolis, they missed their next flight, when a sniffer dog falsely signals that she and Babe were carrying illegal substances and are interrogated. Later an airport cleaner informs them about a hotel where suitable for accommodating animals, which she and Babe travel to and meet the landlady of the hotel name Miss Floom. While Esme was on an errand, a monkey name Tug steals her suitcase. Babe follows him to a hotel room, where he meets three friendly clothed chimpanzees name Bob, Zootie and Easy, as well an orangutan name Thelonius a butler for Miss Floom's uncle Fugly Floom, a clown who kidnaps Babe to use his act. Babe first refuses, but agrees, when the chimps mention a big reward will receive after the act.

Fugly tricks Esme that Babe has wandered out into the city. She goes to find them, but was arrested, after almost getting mugged by a group of bikers leading into an accident with police officers, skaters and billboard painters and getting herself covered with glue in the process.

A few days later, Esme was later released by the judge who was actually the airport cleaner who helped her to get to Miss Floom's hotel earlier and he leads her back to the hotel. She discovered the hotel deserted and mess. She finds Miss Floom mourning her uncle Fugly's demise due to having a food coma after the disastrous act that Babe accidentally caused. Miss Floom informs her what happened to the hotel, while she was with her uncle's side at the hospital and as well Esme still in jail that her neighbor Hortense was behind of her uncle's animals' disappearance and realized she must have called the animal control. They firmly confront her demanding where Babe and the other animals was. They soon find them in a hospital's ballroom, where Babe and the others including Ferdinand (who had followed them earlier) are. They fight the staffs back to get them and successfully rescues them. Later Miss Floom sells the hotel which later turned into a nightclub, and gives the money (the airport cleaner also gives her some money) to Esme to save her farm.

Miss Floom and her animals soon come to stay at the farm (probably to get away from her neighbor Hortense to avoid having her uncle's animals take away again), where Esme greets them and introduces her to Arthur Hoggett who finally recovered from his injury and repairs the well. Esme was doing chores with Thelonius helping her and later inside the farm Esme witnesses her husband say the same line to Babe after winning the sheepdog contest before his accident. 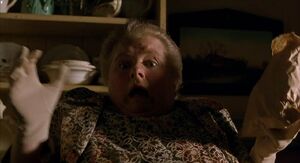 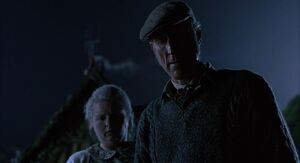 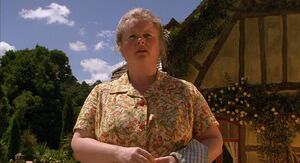