Espeon is one of Eevee's evolved forms from the second generation of Pokémon. It is a Psychic-type Pokémon that evolves from Eevee when it has a strong friendship with it's trainer at Day Time.

Espeon is a quadruped mammalian Pokémon with slender legs and dainty claws. It is cover in fine lilac fur. It's ears are large, and it has purple eyes with white pupils. These are tufts of fur near it's eyes, and a small, red gem embedded in it's forehead.

Espeon are extremely loyal towards their Trainer, and utilize their Psychic powers to protect them from harm.

The jewel on Espeon's forehead emits psychokinetic energy, and has the power of precognition that allows it to predict an opponent's attack. It's velvety fur allows it to sense minute shifts in the air, thus allowing it to predict the weather.

It's other abilities include:

Espeon is one of the eight evolved forms of Eevee. Eevee evolves into Espeon by leveling up with high friendship during the day. In Pokémon XD: Gale of Darkness, Eevee can also evolve into Espeon by using a Dark Shard. 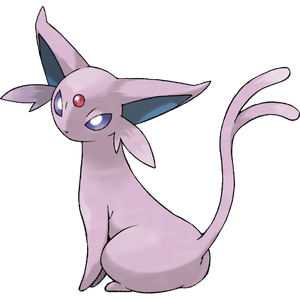 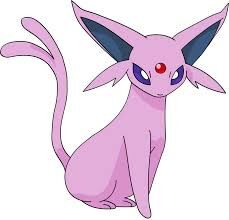 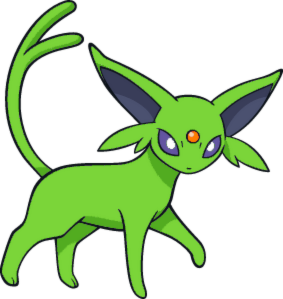 Shiny Espeon
Add a photo to this gallery

Retrieved from "https://hero.fandom.com/wiki/Espeon?oldid=2300931"
Community content is available under CC-BY-SA unless otherwise noted.