Being kind to complete strangers

Help Defeat Alexei and Duke and save the world

Princess, Healer
Estellise Sidos Heurassein (エステリーゼ・シデス・ヒュラッセイン, Esuteriize Shidesu Hyurassein), better known as Estelle (エステル, Esuteru), is one of the main protagonists in Tales of Vesperia. She is the princess and candidate to the imperial throne. Before meeting Yuri, she had not set foot outside the capital. As a result, she is very naive of the outside world. Because of her strong compassion, she never hesitates to help and heal anyone in need. During her time in the castle, she was trained by Imperial Knights, allowing her to wield a sword and shield efficiently in battle, along with healing magic. She also spent much of her time reading books, allowing her to become knowledgeable in a wide range of fields. After traveling with Yuri for some time, she decides that she wants to continue her journey with him and the group in order to learn more about the world.


Estelle is the heroine of Tales of Vesperia. She is a girl who mysteriously runs into Yuri in the castle. Her sheltered nature, and fantastic words and deeds often confuse people. She is very dedicated. Seeing someone hurt, she would try to cure them with her healing artes, paying no attention to herself. Her real name is Estellise. Estelle is a nickname given to her by Yuri. She is also surprised by the many things she encounters in the outside world. She enjoys reading books and takes the knowledge she gains from them very seriously. In combat, she wields swords and staves, as well as healing magic.

Estelle first encounters Yuri Lowell as they are both attempting to escape from the castle. She enlists his aid in her search for Flynn Scifo. Along the way, Yuri gives her the nickname Estelle. After reuniting with Flynn, she decides to continue traveling with Yuri in order to broaden her horizons. During their journey it is revealed that Estelle is both a princess and a leading candidate to succeed the throne. Unbeknownst to her, she also possesses the power of the "Child of the Full Moon", which grants her the ability to use healing artes without a blastia, drawing her powers directly from the world's aer.

Estelle is an 18-year-old noblewoman who has spent all of her life growing up in Zaphias Castle. Due to her restrictive upbringing, she has gained most of her worldly knowledge through books. As a result she has developed a love for reading, and can recite various passages from heart. Proficient in healing artes, she was also trained in swordsmanship by a famed Imperial knight, Drake Dropwart. Despite her abundance of trivial knowledge, she has never left the castle and is sorely lacking in real-world experience. This becomes evident in her difficulty making critical decisions. Good-natured and selfless, she often puts others before herself. She uses her healing artes to help others whenever she can, and she is always kind to complete strangers.

Estelle wields swords, staves, and shields in battle. Estelle is a highly effective healer with both target-based and area-based healing and support artes. Unlike the typical cleric archetype, she possesses a high defense and a large amount of defense-related skills, and can hold her own in the front lines as an effective melee character with an emphasis on tanking enemies. She is also capable of using light-based magic, such as Holy Lance and Photon.

Estelle makes an appearance in Project X Zone. She is a playable character who is partnered up with Yuri.

Princess of the Empire. Estelle is a nickname given to her by Yuri; her full name is Estellise Sidos Heurassein. She has the ability to use healing artes without the need for a Blastia. His desire for this power caused the Commandant of the Imperial Knights, Alexei, to take her captive, but Yuri and her other friends saved her. After this they went on to defeat the "Adephagos," opening the way for her to achieve her life-long dream of being a picture book writer. Has an innocent and kind demeanor, and always puts others first. While warm and gentle-mannered, she also knows little of the world, and can cause problems for those around her with her frivolous comments. 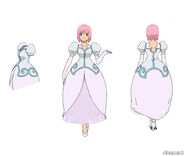 Add a photo to this gallery
Retrieved from "https://hero.fandom.com/wiki/Estelle_Sidos_Heurassein?oldid=1560823"
Community content is available under CC-BY-SA unless otherwise noted.