Jimmy (in the anime)

Ethan, also known originally and initially as Gold, is the main protagonist in Pokémon Gold/Silver, and the male protagonist in Pokémon Crystal as well as the remakes Pokémon HeartGold & SoulSilver. He is also the main character for the same named chapters of the Pokemon Adventures manga and a supporting character in the Emerald chapter. He is known as Jimmy in the Pokémon Anime. In the games, his rival is Silver. In Pokémon Crystal, his female counterpart is Kris, while in Pokémon HeartGold & SoulSilver, his female counterpart is Lyra.

All of the games Ethan is in follow the same core storyline. Ethan is a simple boy who lives in New Bark Town of the Johto Region (One of the two Regions in the Indigo Region, the other being Kanto) when he is called by Professor Elm to make a delivery. Elm realizes Ethan will need a pokémon to carry this task out in order to not be attacked by wild pokémon so he offers Ethan to choose his first pokémon from one of three being Chikorita, Cyndaquil, or Totodile. When Ethan chooses he leaves to make the Delivery. When he does, he meets Professor Oak of the Kanto Region as well as the recipient of the Delivery, Mr. Pokémon. After the delivery, Ethan returns home, along the way he confronts a strange boy who is running away from something. The boy gets mad and challenges Ethan using the starter who has the advantage against Ethan's starter. After being defeated, the boy gets even madder, especially when seeing that Ethan saw his name, Silver, on his ID. Ethan returns the lad where he discovers that someone broke into the lab and stole the starter pokémon with the advantage against Ethan's Starter, leading Ethan to report Silver to the Authorities. Once Resolved Elm tasks Ethan with filling the Pokédex, telling him to go on an adventure, all while challenging the Johto Gym Leaders. Ethan accepts and starts his Journey

During Ethan's Journey, he does all that was described by Elm. He caught Pokémon, including building the main team for battling the Johto Gym Leaders, and he explored the Johto Region for both its nature and towns. Ethan did get into some skirmishes with the criminal organization Team Rocket which has been revived since Giovanni, its leader, officially disbanded the organization. He also met some of its executives, high ranking members who revived the team and are running it. Ethan also encountered Silver along the way, battling, again and again, causing them to become hated rivals. Ethan slowly learned about Silver's past with Team Rocket and why he hated them, but not much could be elicited from Silver. Eventually, Ethan met the current Indigo Region champion Lance, After the player either beats or captures the Red Gyarados from The Lake of Rage, Lance joins up with Ethan to defeat Team Rocket, finding their hideout and defeating the Executives in it. Lance thanks Ethan for his help and tells him he is looking forward to seeing him challenge the Indigo Pokémon League. After Ethan gets his Seventh Badge, Team Rocket's Ultimate Plan is revealed as over the Radio they are sending a message for Giovanni to return. Ethan races to Goldenrod Tower and challenges Team Rocket, eventually climbing to the top where he meets the assuming head Executive Archer, who has never seen before. They talk for a bit before battling. Archer is defeated which leads him to no other choice but to reluctantly disband Team Rocket again as Giovanni hadn't shown up and Ethan had beaten all of Team Rocket's Executives. After this Ethan collects the final Johto Gym Badge from Clair after a minor conflict where Clair refused to give him the Gym Badge because she mistook Ethan for a trainer who only cared about winning as opposed to a caring trainer who isn't selfish. The Master of the Dragon Tamer resolves this when he evaluates Ethan and declares that he isn't a selfish trainer, in which he forces Clair to give Ethan the Gym Badge. Ethan then heads to Victory Road encountering no Trainers until the End when Silver reveals he has beaten all of the trainers already and then challenges Ethan to one last battle. After the battle silver warms up a bit but quickly leaves Ethan alone. Ethan then challenges the Elite 4 of the Indigo Region and later the champion Lance. After defeating Lance he is declared the Indigo Champion by Lance. Later Ethan gathers the Kimono Girls to Summon either Ho-Oh (Gold) or Lugia (Silver) which he catches upon confrontation. In Pokémon Crystal, Ethan would Encounter Suicune is three locations before confronting it at Tim Tower to catch it. Ethan would then leave for Kanto

Ethan would take the SS Aqua to Kanto in order to continue his Journey, now involving catching the remaining Kanto Pokémon and defeating the Kanto Gym Leaders. along the way, he fights remnants of Team Rocket, but the encounters are much more minor. In the remakes, Ethan would encounter Suicune at various points, eventually able to confront it and catch it. Ethan also slowly learns of Red's whereabouts, eventually encounter his rival, Blue. After defeating all Gym Leaders, Ethan challenges Blue and then after Blue's defeat and surrendering of the Earth Badge, Blue tells him that he can go to Mount Silver, where the most powerful of trainers go, perhaps Ethan could find Red up there. Ethan goes to Mount Silver and climbs it, eventually finding a silent boy at the top, who doesn't say anything before the two challenge each other. It is revealed to be Red as Ethan faces his final challenge against the most powerful trainer of the Indigo Regions. After being defeated, Red says nothing before walking away. Ethan then returns home to conclude his journey.

As an NPC (HGSS Only)

In Pokémon HeartGold and SoulSilver, if the player chooses Lyra, Ethan will appear as an NPC and friend. He is always seen with a Marill alongside him. Ethan's role as an NPC is to be a supporting character to Lyra, mainly teaching her about Pokémon and giving simple tutorials such as How to catch Pokémon, much like the role of Lucas\Dawn when they are not chosen by the player.

Whether he is the protagonist or not, Ethan plays a role in the Celebi Event of the remakes. Celebi takes him and Lyra through time to reveal who Silver really is, including seeing how he is Giovanni's son, seeing when Giovanni abandoned him, assumingly after Giovanni disbanded Team Rocket. Celebi then takes them to a cave where Giovanni is studying something, all while listening to the radio, eventually hearing Team Rockets call. When he is about to leave for Team Rocket, Giovanni notices the two eavesdropping on him, in which he challenges the Protagonist in a battle. After Defeat, Giovanni becomes frustrated at why he can't win, he then leaves and doesn't join Team Rocket, revealing why he didn't show up in the main story. Whichever is the supporting character will comment on the story as this happens, eventually pleading to return home. Celebi returns them to the present where the NPC is overjoyed to find Marill safe (Marill was left behind when Celebi teleported them). The NPC will then say goodbye to the Protagonist and leave.

Ethan has a counterpart named Gold. He serves as the main protagonist of the Gold & Silver arc. He lives in New Bark Town. He later appears in the Crystal arc, the Emerald arc and in the HeartGold & SoulSilver arc.

Ethan has a counterpart named Jimmy. He is a friend of Marina (Kris's Counterpart). 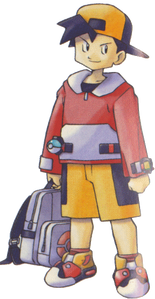 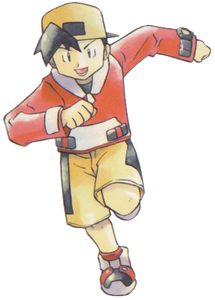 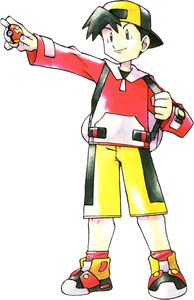 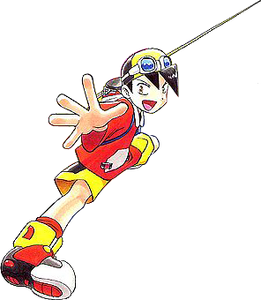 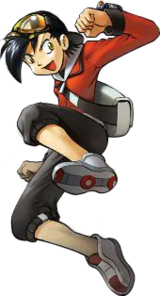 Gold's new outfit in the HeartGold and SoulSilver arc 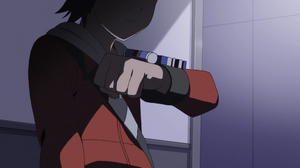