Founding leader and ruler of the Aogiri Tree

To create a revolution which would enable ghouls and humans to coexist peacefully.

To make Ken Kaneki the next One-Eyed King.
To destroy V. (all succeeded)

Eto Yoshimura (in Japanese: エト, Eto) is a ghoul and is the founding leader and ruler of the Aogiri Tree. She is the infamous One-Eyed Owl who killed Kureo Mado's wife and Akira's mother. Her human identity is Sen Takatsuki (高槻 泉, Takatsuki Sen),

a best-selling horror novelist mentioned throughout the series which both Ken Kaneki and Rize Kamishiro aSuperhuman Strere fans of and whose books they have read.

In the near ending of the first series, it is revealed that Eto is the daughter of a human named Ukina and Yoshimura, a ghoul who owns the Anteiku Cafe at which Kaneki works. She is often seen together with a fellow Aogiri member, Tatara, as both frequently watch fights from a distance.

When she's out on missions, Eto wears a very childish attire with bandages wrapped around her body and a dark pink cloak around her body. She also wears a bright pink neckscarf with flowers on it.

When she operates as her human identity, Sen Takatsuki, she wears dark blue robes around her and has a very sleepy expression on her face. She has light skin and long green hair. Her hair is always in a very sloppy fashion but it's based off of her mother.

As the One-Eyed Owl, she wears a large mask with a hole in the right side and zigzag lines down on the left. There are two lines down in near the mouth and is slanted downwards. After ten years of use, her mask has now grown horns and markings on the forehead, and has single eye right in between the eyes.

Eto was a very childish, calm, hopeful, uplifting, clumsy and ditzy girl in her human identity often oversleeping on various occasions even druing a book signing but is happy when its prohibited by her manager. She was also very friendly and demonstrative especially towards Hinami where she often acts polite and kind around her and will giver her helpful advice but never sugar-coats it. She appears to be viewed as a friend by Hinami, and it is possible that Eto managed to convince Hinami to join Aogiri later on as implied after the destruction of Anteiku. 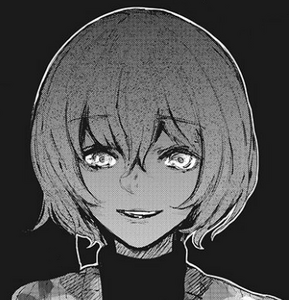