Etrigan, also known as Etrigan the Demon, is a fictional character and anti-hero in DC comics, being a rhyming demon lord that serves Lucifer, and is bound to the mortal Jason Blood.

He is a demon born to Belial and Ran Va Daath, and due to his violent and rebellious personality, was bonded to the mortal Jason Blood by the wizard Merlin. Though Etrigan is often at odds with Blood, he has willingly done some heroic acts, but his alignment has remained neutral since his appearance. His distinctice trait is his ability to rhyme, which is stated to be a symbol of his social status in Hell. Since his debut, he has been a member of the Justice League, Justice League Dark, Justice League United, and the Demon Knights.

He was created by the late Jack Kirby, and first appeared in The Demon #1 in September of 1972.

Etrigan was a rhyming demon in the service of Lucifer. Not content with his life, he attempted a rebellion, which did not succeed. For his insolence and betrayal, he was banished to Belial's son Merlin, who had asked Hell for a means to protect Camelot. He fused Etrigan to the rebellious scribe Jason of Norwich, and they would walk Earth together, cursed to live with each other.

Etrigan was born on the thirteenth day of the thirteenth month that his parents, Belial, the archduke of Hell and the serpent queen Ran Va Daath. She would conceive the child following a long war against Belial, who was trying to expand his territory across the land of River Acheron. Upon his birth, the demon was branded with a sigial as Belial's first born, and Etrigan expressed immediate pleasure from the pain of the mark. As a result, Etrigan enjoyed and relished in pain and torture, and committed so many antics that Lucifer ordered Belial to control his child. When Etrigan couldn't be beaten into submission, Belial had Daath exiled and blamed his son, but this only angered the demon.

When he reached adutlhood, Etrigan continued to lash out against his father, and tricked Belial into sleeping with an animal spirit that gave birth to Scapegoat. Though Belial wanted his second son to fight Etrigan, Scapegoat cared for his brother, causing Belial to have a third son with a witch. She would give birth to his third son Merlin, having him bred with the purpose to become a powerful wizard that could either subdue or destroy Etrigan.

During the fall of Camelot, Merlin summoned Etrigan to stop Morgaine le Fey from getting the Eternity Book, but the wizard decided to bound the demon to the mortal Jason Blood. Etrigan would kill Jason's wife and children, and was later summoned when the townsfolk turned against the mortal. On Prime Earth, Etrigan was fused to Jason after the former's attempt at a rebellion failed, and he was punished via Merlin.

Following this, Etrigan remained bound to Jason, and the demon would often entice violence while Jason helped him pillage countless countries and lands. During their pillaging, the two would come to the service of Lucifer, such as delivering the soul of Captain Scumm to him. During the First World War, Blood nearly went insane after Etrigan was summoned to kill the Germans, but also killed all of Jason's squad. To spare his host, Etrigan cast a spell to erase Jason's memories, but this would result in Blood losing all of past memories as well. Blood would spend half a century without knowledge of Etrigan, but the demon was summoned to a crypt by Merlin, but Morgaine followed them and restored herself. Wanting to find the Philsopher's Stone, le Fey managed to stop Etrigan by making him turn back into Blood, and tried to brand him to control the demon.

Etrigan and Blood would often work together to deal with occulist, such as Baron von Rakenstein, a surgeon who wanted to control Etrigan by placing Blood's head onto a monster's body. The demon would free Rakenstein's monster so it could destroy the laboratory, and Etrigan would use magic to turn the baron and his servant Igor into vultures. Additionally, Etrigan would help others, such as the Phanton of the Sewers once the demon was reawakened by Blood (as Kalrion almost revealed Jason's secret), and helped the spirit reverse a spell on Jason's love-interest Glenda.

Due to Etrigan's vicious nature being reigned in from Merlin's influence, Jason became more confident in summoning the demon to help him in his exploits. Blood would call upon him to help several heroes, such as saving Batman from being killed the ghost of Jack Dobbs, or freeing him from the sorcerer Shahn-Zi. Blood would later travel to Lousiana where he learned that Kamara had returned, and summoned Etrigan to help him prevent the monster from feeding off on a young boy named Paul. However, the demon initially wanted to kill Paul to stop the monster, but he stopped by Swamp Thing, who refused to allow him to hurt the boy. Paul would manage to stop Kamara by facing his fears, thus allowing Etrigan to cage the monster.

Though Etrigan remained mostly heroic, he would often clash with superheroes on numerous ocassions, and attempted to free himsel from Blood. When Glenda was abducted when searching for the book of Belial, Etrigan managed to summon himself and tricked Jason into putting having Merlin banished from the Earth. Freed from Merlin's influence, Etrigan escaped from Blood's body, and allowed him to live a miserable existence while he was free. However, Etrigan had to return to his host when Darkseid and Highfather tasked Blood with helping them save the universe. 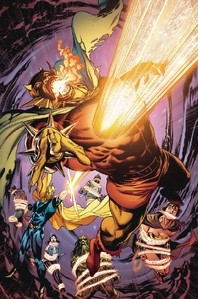