Member of the Return of the Winged One (formerly), Member of GROUP (formerly)

Break away from the control of Academy City's higher-ups (succeeded), Protect Mikoto Misaka from harm

Etzali (エツァリ Etsari) is a recurring character in the Toaru Majutsu no Index series. Originally refered to as the Aztec Magician, Etzali is a member of the Return of the Winged One and was sent to Academy City to deal with the ever growing problem of the Kamijou Faction. While there however, he ended up falling in love with Mikoto Misaka to the point where he was willing to join up with GROUP just to protect her.

Etzali is usually seen with the appearance of Mitsuki Unbara with short combed brown hair and a light tan suit. He usually sticks with this appearance and his actual true form is rarely ever shown at all. His true form however, appears to be that of a dark skinned teenage boy with dark black hair.

Etzali shares many similiar traits to that of other GROUP members. He's a liar and isn't afraid of doing so in order to achieve his goals and advance his agenda. He admits himself to being a liar and often acts like a petty criminal as well due to his time as an operative of GROUP. However, he does have good intentions as he is in love with Mikoto Misaka and wants to keep her safe and joined GROUP because of it. He also tends be rather honorable as he was able to accept defeat from Touma Kamijou and the two made a deal that Misaka would be kept safe from harm's way. His way of being a liar and a manipulator albeit with good reasons is similar to that of Motoharu Tsuchimikado as they seek to protect those they love while also trying to break away from their puppet masters.

Etzali hails from Central America and as a result of being a magician from such a region, he has access to Aztec Magic. Aztec Magic is his primary source of magic and makes up all of his primariy abilities and attacks. Much of his resources also stem from ancient Aztec culture as well and he often uses it to his advantage.

Etzali in his winter uniform 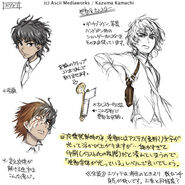 Etzali being shocked
Add a photo to this gallery

Retrieved from "https://hero.fandom.com/wiki/Etzali?oldid=1701668"
Community content is available under CC-BY-SA unless otherwise noted.