Help black people and diminsh the discrimination by writing a book on them (succeeded).

Eugenia Phelan, most known as her nickname Skeeter is the main protagonist of the Kathryn Stockett's best-seller novel, The Help.

She is portrayed by Emma Stone in the 2011 movie adaptation who also portrayed Olive Penderghast in the 2010 movie Easy A, Eep Crood in The Croods, and Gwen Stacy in The Amazing Spider-Man film series afterwards.

Skeeter is a 23-year-old white woman with a cotton trust fund and a college degree. She lives at home on her family's cotton plantation, Longleaf. And she devotes herself, at considerable risk, to a book featuring the real stories of the black women who work for the white families in her hometown of Jackson, Mississippi.

She belongs to the Junior League and is in tight with other high-society ladies. She's best friends with Hilly Holbrook and Elizabeth Leefolt since grade school. But as the story progresses, Skeeter becomes more and more distanced from this safe social status and goes, as they say, rogue. She breaks all the rules and crosses dangerous lines – and we love her for it.

What cinches her new position of social outcast is the prank she plays on Hilly, who is trying to get a bill passed requiring Mississippi families to build outdoor bathrooms for their black employees. Well, Skeeter arranges for dozens of toilets to be dumped on Hilly's lawn, and got a big laugh out of us, at the very least. Hilly doesn't take this calmly, though, and turns Skeeter into a social pariah. So much so that Skeeter compares herself to outcast Boo Radley in To Kill A Mockingbird, which she's been reading (even though it's a banned book in Mississippi). She fears, somewhat jokingly, that like Boo, she'll choose to stay inside to hide from the ugliness of society.

In the final, Skeeter's own friends shun her, the black community embraces her, though not openly (because it's too dangerous).

She is a beautiful woman with kinky and strawberry blond hair, more public than cranial who's breaking off easily. She is also extremely tall for a woman at that time.

Miss Skeeter is an independent, modern and persistent young woman who wants to do more with her life than just get married and have children, and much of her personality was influenced my her maid Constantine, with whom she especially bonded. 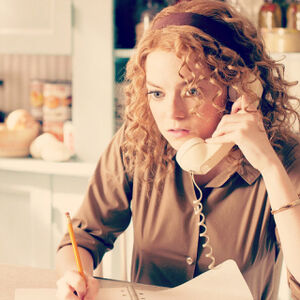 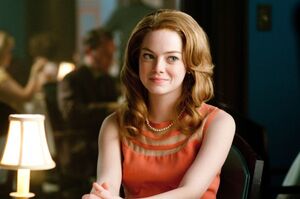 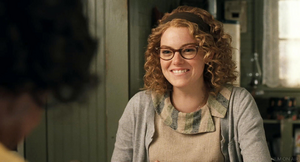 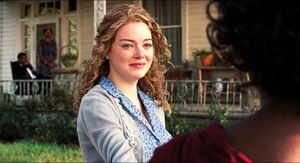 Skeeter at the end of the film.