Heroes Wiki
Register
Don't have an account?
Sign In
Advertisement
in: Articles under construction, Infobox Update, Madagascar Heroes,
and 11 more

The intelligence analysis member of "The North Wind"

Stop Dave and his invasion, turn back the mutant penguins (All succeded)

Eva is a Russian snowy owl who is the North Wind's Intelligence analyst and a major character of Penguins of Madagascar (2014).

She is voiced by Annet Mahendru. In the Latin America dub, she is also voiced by Cony Madera.

Eva is a Russian snowy owl with a Russian accent, blue eyes with long blue eyelashes, and white feathers. She is extremely beautiful and smart.

Like Kowalski, Eva is the brains and analysis of their team. She is able to battle the enemies after the Penguins, which immediately impresses Kowalski. He attempt to flirt with her most of the time he is seen with her. Eva reciprocates the affection to Kowalski by kissing him on the beak before kissing around his face.

Initially, Eva doesn't return her feelings towards Kowalski when they first met. However, it implied she had a crush on him the same time he did. She kisses him on the beak lips, having developed feelings for him at the climax.

Eva and her team are more than just her companions, they are also like a family, similar to Skipper and the other penguins. She is very caring towards Corporal, even calming him down after discovering that Dave had kidnapped all the other penguins. 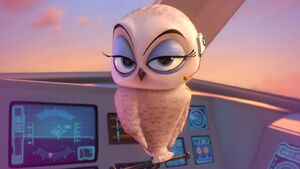