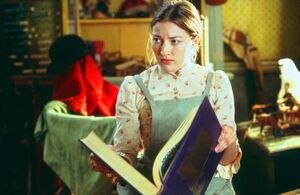 Evangeline is a heroine featured in Nanny McPhee.

She is the Brown family's scullery maid and takes care of the children when Cedric, our hero, is away looking for a nanny and a wife. Evangeline cares very deeply for the Brown children, even at times when she has to scold or yell at them. She is really a kind, sensitive woman who learns to read. Evangeline bravely takes Chrissie's place as Aunt Adelaide's adopted daughter and stands up to her in the wedding. She marries Cedric to bring the family together again, with guidance from Nanny McPhee.

Retrieved from "https://hero.fandom.com/wiki/Evangeline?oldid=2128599"
Community content is available under CC-BY-SA unless otherwise noted.