Even Piell is part of the Jedi High Council of the Jedi Order. The outspoken Jedi Master is not be undermined. Even Piell bears a scar across his eye as a grisly trophy of a victory against terrorists who made the mistake of thinking too little of the undersized Jedi.

Seated next to Yoda, Even Piell has one of the long-term seats on the Jedi Council. Even Piell sits on the Council during the galaxy's first steps toward war. He is present when Qui-Gon Jinn presents the young Anakin Skywalker to the esteemed Jedi leaders for the first time. Jinn also brought information regarding the Sith's return and returned to Naboo with his apprentice Obi-Wan Kenobi.

Kenobi and Jinn fought the Sith Lord but Qui-Gon lost his life in the duel. Piell and the other members of the Council traveled to Naboo to attend Jinn's funeral and allowed Kenobi to train Anakin as a Padawan.

Even Piell sat on the Council when Master Kenobi and Anakin told them of the assassination attempt on Senator Padme Amidala where it was decided Skywalker would escort the Senator to her home planet of Naboo. Later they learned that all three were captured by the Separatists on the planet Geonosis. A team of Jedi led by Mace Windu to Geonosis to rescue them with Piell being one of them. Piell fought in the arena and later the battle outside the arena and was one of select few Jedi who survived the Battle of Geonosis and the Clone Wars began.

Piell became a Jedi General and fought in many battles. Early in the war, Piell was present during an important Jedi Council meeting. The Masters discussed the Separatist new commander, General Grievous who had killed several Jedi and the Council worried about the least number of Jedi in the Order. Master Kenobi suggested that his Padawan, Anakin, forgo the trials and become a Knight, though many Council members disagreed. Piell pointed out that the Supreme Chancellor, Palpatine had been requesting for Anakin's promotion for months, which Mace Windu said politicians have no say in Jedi matters. Yoda in the end decided that Skywalker shall be Knighted and Piell was present during the ceremony.

During the Clone Wars, he was captured and sent to the Citadel prison on Lola Sayu . The Jedi were sent to rescue him since Piell contained valuable information of the Nexus Route Hyperlane. Although they and their clone troopers escaped the facility, Piell was fatally wounded by an Anooba. Before he passed on, Piell gave his half of the Nexus Route intelligence to the Jedi Council through Jedi Padawan Ahsoka Tano.

Even Piell was from Lannik, a planet with a long history of war. A gruff and battle-hardened warrior during the Clones, Piell fought in many battles such as Geonosis and Hypori. 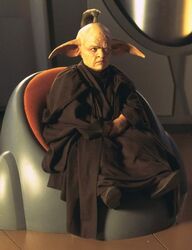 Even Piell, as he appears in The Phantom Menace 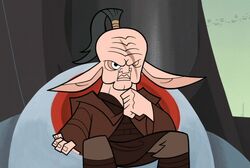 Even Piell, as he appears in Star Wars: The Clone Wars 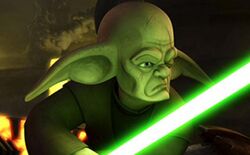 Even Piell, as he appears in the CGI version of Star Wars: The Clone Wars
Add a photo to this gallery
Retrieved from "https://hero.fandom.com/wiki/Even_Piell?oldid=1865210"
Community content is available under CC-BY-SA unless otherwise noted.