Avoid getting caught by Dr. Zara and her mercenaries (succeeded)

To return home to his family (succeeded)

Everest is the deuteragonist of the 2019 DreamWorks film Abominable. He is a young yeti who lived on the rooftop of Yi's apartment after evading capture by poachers led by Dr. Zara. He later returned back to his family.

He is voiced by Rupert Gregson-Williams

Everest was a baby yeti with magic powers who lived on Mt. Everest in the Himalayas with his parents. One day, he ended being separated from his family when he was captured by a Shanghai company called Burnish Industries. The company's CEO, Mr. Burnish, who wished to reveal the existence of yetis to the world had Everest brought to Shanghai and kept locked in a compound before preparing to reveal the yeti's existence.

Everest manages to escape his cell, but flees when zoologist Dr. Zara notices him and sounds the alarms. Everest ends up being stopped by an electric fence and cornered by an approaching Dr. Zara and some Burnish Industries employees. However, Everest uses his powers to create lightning as a distraction and manages to escape once the electric fence has been destroyed. Everest flees up in the city of Shanghai and unaware of his new surroundings, ends up in an intersection and gets his by an oncoming truck. Injured, Everest backs up into an alleyway where he notices a billboard for Mt. Everest, his home. Wanting to get a better view of the billboard, Everest climbs up to the roof of a nearby building and stares at the picture of his mountain, longing to go home. 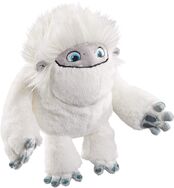 Everest and Yi on the film's teaser poster

Everest on the film's trailer

Everest's first appearance-escaping from his cage at Burnish Industries.

Everest fleeing from his captors.

Everest cornered by Dr. Zara and her minions.

Everest about to use his powers to create a distraction and escape.

Everest escaping into the city.

Everest about to be hit by a truck.

Everest noticing a billboard for his home, Mt. Everest.

Everest climbing up to get a better view of Mt. Everest.

Everest looking at the billboard of his mountain.

Everest longing to go home.
Add a photo to this gallery

Retrieved from "https://hero.fandom.com/wiki/Everest_(Abominable)?oldid=1723506"
Community content is available under CC-BY-SA unless otherwise noted.