He is a CIA agent and former member of the Joint Counter Terrorist Centre, being the former deputy task force commander. Ross was tasked by Thaddeus "Thunderbolt" Ross to control and regulate any actions of the Avengers, and would later see the imprisonment of Helmut Zemo. Ross would later become an ally of Black Panther and his allies in stopping Erik Killmonger, and discovered the technological advancements of Wakanda.

He is portrayed by Martin Freeman, who previously portrayed Bilbo Baggins in the Hobbit trilogy, and John Watson on the BBC series Sherlock.

Everett Kenneth Ross was born at an unknown time, and later joined the United States Air Force as an officer. Ross became one of its top pilots, and briefly encountered Erik Stevens, who was the son of the late Wakandan prince, N'Jobu. Ross later left the Air Force and was recruited into the Central Intelligence Agency, and was later put in charge of the Joint Counter Terrorist Centre.

Everett K. Ross was the supervisor of the Joint Counter Terrorist Centre, a joint collaboration between different agencies to track down and arrest terrorists.

Following the bombing of the United Nations, the Joint Counter Terrorist Centre had a task force searching for the alleged culprit, Bucky Barnes (aka the Winter Soldier). They had him tracked down to his apartment in Romania, and would've been able to arrest him there, if not for the intervention of Captain America, the Falcon, and the Black Panther. After a chase through the streets, the task force was able to bring them all into custody, with the help of Colonel James Rhodes, in the War Machine Armor.

At their headquarters in Germany, Everett Ross greeted Captain Rogers, Sam Wilson, and King T'Challa to inform them that the Joint Counter Terrorist Centre would be confiscating their equipment and keeping them confined within the base for they were in violation of the Sokovia Accords. At the base were the CIA liaison Sharon Carter and government-appointed Avengers such as Tony Stark and Natasha Romanoff.

Ross watched a psychiatrist interrogate the Winter Soldier over security feed, but suddenly, an EMP went off and shut down main power to the headquarters. This sent the base into a panic, as the Winter Soldier was also able to escape. Carter, T'Challa, and the rest of the Avengers did their best to keep the Winter Soldier from escaping the base, but Captain Rogers helped him escape anyway.

A couple of days later, the real culprit behind the United Nations bombing and the Winter Soldier's escape from the base was revealed to be Colonel Helmut Zemo, the man posing as the Winter Soldier's psychiatrist. Ross had him locked up in a way that if he tried escaping, he'd be electrocuted. Ross asked Zemo how it felt to see his plan to destroy the Avengers fail, and Zemo asked him in return, "did it?"

Ross was tasked by the CIA with capturing and arresting criminal and arms dealer Ulysses Klaue, being pulled from the Joint Counter Terrorist Centre to do the mission. Learning that Klaue had recently got his hands on a Vibranium weapon, Ross arranged a meeting with Klaue at the Jagalchi Market Casino. During the meeting, a battle broke out and Klaue attempted to escape, but was chased down by Ross, T'Challa, Nakia and Okoye. Ross assisted Nakia and Okoye in stopping Klaue, and witnessed them convince T'Challa to spare Klaue so he could be taken into custody.

Ross interrogated Klaue, and learned of Wakanda, a place he believed to be a third world country, but was actually a land filled with vibranium and advanced technology. Klaue's stories about Wakanda were confirmed to be true, and Ross confronted T'Challa on his secrets. Before he could further question T'Challa, Nakia entered to warn everyone that Killmonger planned to free Klaue from interrogation. Killmonger then proceeded to attack them, and shot Ross in the spine as he was shielding Nakia from gunfire. T'Challa offered to take Ross back to Wakanda to help him recover, despite the country's attitudes toward outsiders.

After recovering with the help of T'Challa's sister, Shuri, Ross explained the origins of Killmonger to the group. Ross was later locked into a room to be kept out of sight, and was later informed by Nakia that T'Challa was "killed" by Killmonger in a duel. Fearing that Killmonger will kill anyone who would challenge his control of the throne, Ross escaped with Nakia, Shuri and Ramonda. T'Challa was found critically injured by M'Baku and his clan, and was later given the last Heart Shaped herb by Nakia to give him his strength.

Ross decided to assist T'Challa and his allies in stopping Killmonger, and assisted Nakia in entering Shuri's lab while T'Challa challenged Killmonger once again. Ross piloted a royal talon to assist the group, and help them by destroying the final enemy ship as W'Kabi surrendered to M'Baku. Sometime later, Ross appeared at the United Nations and suggested to T'Challa to not reveal Wakanda to the rest of the world. T'Challa refused, telling him that Wakanda will not live in fear, and Ross saw T'Challa give a speech at the United Nations. 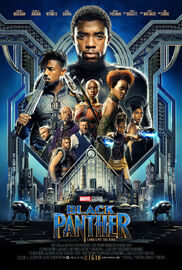 Everett Ross on the poster for Black Panther. 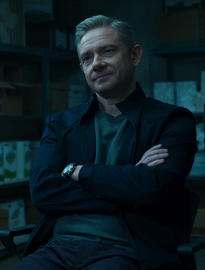