Pawn of the Villain
Ewan Amano is younger brother or Nene Amano and partner of Damemon.

He is voiced by Kanae Oki in the Japanese version and Cindy Robinson in the English version.

Ewan is a short blond boy with gray eyes. He wears black suspenders with plaid maroon-purple shorts with a pocket on each side. He also wears a grey shirt with a red tie, white socks, and black shoes. According to Nene, his eyes are very similar to Mikey's.

One year later, Ewan is quite a bit taller, and usually wears a yellow button-up shirt with white pants, and gray and green sneakers with white soles.

Like Mikey, Ewan is an excellent strategist, able to come up with good battle actions on the spot. Before Ewan came to the Digital World, he is quiet, compassionate, and above all emphatic to all life. He cares greatly for even the smallest forms of life, like a butterfly, and hates bringing anyone to harm. However, when AxeKnightmon opens a portal to the Digital World for Ewan and claims to be taking him to a world where nothing really dies or gets hurt, Ewan feels that he can act without remorse, as he isn't really hurting anything.

Because he thinks there are no consequences, Ewan treated the Digital World like a game and acted without regard to the safety of anyone in it. When he realizes that the Digital World contains living creatures capable of dying, Ewan feels intense remorse and regret for his actions as he joins with the Fusion Fighters United Army to redeem himself.

He is held hostage by SkullKnightmon. But, in reality, Ewan is a willing member of Team Midnight and is its true General, having used the black Fusion Loader Nene currently possesses and then receiving the Darkness Loader from SkullKnightmon to assume his place in the Bagra Army as the leader of the Midnight strikeforce. He had met his future partner Damemon for the first time on the day his grandmother died. Having been against playing with others in fear of hurting them, he was deceived by SkullKnightmon, under the notion that the Digital World is just a virtual game and destroying Digimon and humans alike have no real consequences. As a result, under the delusion that it is a game with no consequences, Ewan fettered out his hostility and became a sadist, who fights with no holds barred, even against his own sister. During the events in the Underworld battleground under Bright Land, Mikey manages to convince Ewan that SkullKnightmon is using him and tricked him into hurting others. However, SkullKnightmon abducts Ewan and imprisons him before he is saved by Mervamon. Ewan later aligned with Mikey and the rest of the Fusion Fighters United Army in the final battle against DarknessBagramon and his Darkness Loader changed into a yellow Fusion Loader.

One year later, Ewan, in the seventh grade, joins Mikey's basketball team with Tagiru. He looks up to Mikey as his senior and views Tagiru as brash and idiotic. He was secretly envious of Tagiru and the others for having Digimon partners with Damemon nowhere to be found, rendering Ewan virtually useless in battle. In a fight against Airu, Damemon and Ewan were finally reunited, with Damemon officially becoming Ewan's partner. Ewan lives on his own, because his parents are traveling and Nene is in Hong Kong. Despite being in seventh grade, Ewan is very responsible on his own. 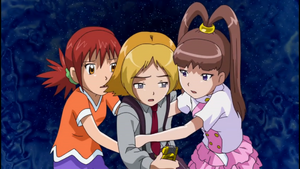 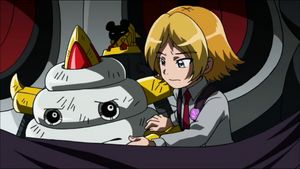 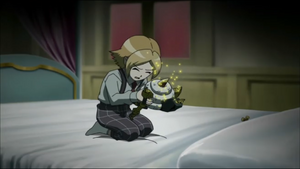