Skilled in forest survival and the construction of primitive technology

Superb adapters and quick learners
Physically strong enough to overpower combat-trained humans despite their diminutive statures
Strength in numbers
Knowledge of pottery, hunting, and primitive flight, along with the creation of fire

Ewoks are small, mammaloid bipeds who appear in the Star Wars universe. They are hunter-gatherers resembling teddy-bears that inhabit the forest moon of Endor.

The Ewoks didn't appear until the middle of the film when one of the Ewoks, Wicket appears poking Princess Leia with a spear after the bike chase, She wakes up after he pokes her. When Wicket threating her, Leia calms him by giving him food where Wicket sits with her in the log. He found the food to be very good, but he again became fearful of Organa, though she was merely removing her helmet. He began to inspect the headgear but stopped and grabbed his spear when he heard more Imperials. When the troopers fired at them, Wicket and Organa hid behind a log until another blast hit.

At that point Wicket rolled out of sight. As a scout trooper approached Organa at gunpoint, Wicket realized she was no friend of the Imperials, so he attacked the trooper's legs, giving Organa a chance to swing at the trooper, grab her blaster, and shoot the other Imperial before he could get away. Wicket praised the princess' skill, as he then had a new respect for her. As they headed off, Wicket urged Organa to follow him, and he made sure that she arrived safely at Bright Tree Village. Meanwhile, another group of Ewoks captured Luke Skywalker, Han Solo, C3PO, Chewbacca, and R2-D2. When these Ewoks saw the protocol droid, C3PO, they identified him as a long-prophesied god called "The Golden One".

Despite Wicket and Leia's protests, Logray would have sacrificed them as a feast in C-3PO's honor. Skywalker's use of the Force combined with C-3PO's warnings soon changed Chief Chirpa's mind, however. That night, Threepio told the Council of Elders the adventures of the Rebel heroes. The Ewoks accepted the Rebels into their tribe and allied themselves to their cause. The Ewoks helped in the ground battle to destroy the Imperial shield generators on the forest floor, and their primitive weapons felled the stormtroopers and the scout walkers of the Empire, although they took many losses to Imperial blaster fire. This assistance paved the way for the destruction of the second Death Star and the Rebel victory at the Battle of Endor. Later that night, the Ewoks held a huge celebration that could be heard throughout the forest. The Ewoks were determined to save their forest by several means. 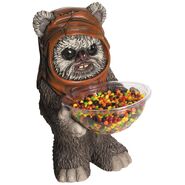