Eye Guy (alternatively spelled as Eyeguy) is the Omnitrix's DNA sample of an Opticoid from the planet Sightra.

In the original series, Eye Guy wore black pants with white bands on them and a white belt with the original Omnitrix symbol on it. He had light green eyes with dark green pupils, and he had one giant primary eye in the center of his chest.

His feet were light in color, but in all following designs his feet match the same dark yellow as on his body.

In Ultimate Alien, Eye Guy looked the same as before, except the big eye on his chest was replaced by his Ultimatrix symbol.

In Omniverse, 16-year-old Eye Guy's eyes are now bigger, recolored slightly brighter, and placed perfectly symmetrically on his body. There are also now eyes on his palms. His pants now have green cuffs replacing the white bands, the main belt where the Omnitrix symbol is located is recolored green with a white stripe, and he additionally wears green cuffs on his hands.

11-year-old Eye Guy looks mostly the same as he did in the original series, albeit he has the palm eyes, eye placement, and pupil color of his 16-year-old self. He wears white bands respective to the green cuffs and the original Omnitrix symbol on his belt is recolored green.

Eye Guy's entire upper-body is covered with green eyes, although he ironically has no eyes on his face, which consists of just a mouth and a very large pair of bat-like ears. He has dark yellow skin with lighter yellow skin on his chest. His entire skeleton is made of cartilage, not bones. 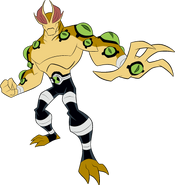 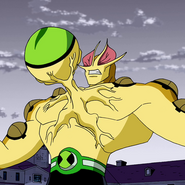 Retrieved from "https://hero.fandom.com/wiki/Eye_Guy?oldid=2304539"
Community content is available under CC-BY-SA unless otherwise noted.