Avenge his family (AC:II)
Eliminate the Borgia (AC:B)
Unlock the crypt in Masyaf (AC:R) (all succeeded)

Ezio Auditore da Firenze is the main protagonist in Assassin's Creed II, Assassin's Creed: Brotherhood, and Assassin's Creed: Revelations. He was a Florentine nobleman during the Renaissance, and, unbeknownst to most historians and philosophers, the Mentor of the Italian Brotherhood of Assassins, a title which he held from 1503 to 1513. He is also an ancestor to William and Desmond Miles, as well as Clay Kaczmarek.

He is voiced by Roger Craig Smith, who also voiced Sonic the Hedgehog in numerous media and videogames, Chris Redfield in the Resident Evil series, Batman in Batman: Arkham Origins, Captain America in the Marvel Animated Universe, Siegfried Schtauffen in the Soulcalibur series, Bushwhack and Boom Jet in Skylanders, Richard and Hawkodile in UniKitty! and Kyle Crane in Dying Light.

Ezio was raised as a young Florentine nobleman, living during the 15th and 16th century. He was brought up without knowing of the Assassins' existence, or of his heritage. A seducer of women and a playful man, Ezio possessed acrobatic skills far beyond those of his peers, barring his brother.

He also came from an affluent background and had many friends, until the deaths of his father and brothers drove him out of Florence. Forced to protect his mother and sister, Ezio became an Assassin, exacting revenge on the conspirators who had betrayed his family and plotted to seize both Florence and Venice.

Initially, Ezio allowed his emotions to get the best of him, going so far as to disrespect the corpse of Vieri de' Pazzi just after his death. However, Ezio did manage to gain control of his anger and, by the time he had become a Master Assassin, could control it almost completely. That said, Ezio was still prone to losing control of his emotions at the right trigger; in 1506, he beat up Duccio de Luca in a fist-fight, after the latter had insulted Ezio's sister, Claudia, for her position as the Madame of the Rosa in Fiore.

However, by the time Ezio confronted Rodrigo Borgia, he had become more dedicated to his role as an Assassin, ceasing to use revenge as a motivation. He became more focused on instilling a sense of fraternity among his apprentices, and a love of the cultures they would defend from the Templars. He also spared the lives of any targets that he concluded had no need to die, such as Micheletto Corella.

Ezio was also passionately loyal to his family, and was pained for the rest of his life after the Auditore execution. While he was able to lay the bodies of his fallen family to rest, he continued collecting feathers during his time in Italy, as a remembrance of his youngest brother. The feather collection was part of what helped his mother recover from her depression at the loss of her sons and husband.

Ezio always put protecting his mother and sister above his safety and his allegiance to the Assassins, quick to defend his sister's honor from Duccio, and always ready to help his mother, even when she was helping her daughter lead the courtesans in Rome. Claudia thought Ezio a bit overbearing at times, as shown by her journal, but knew that he was trying to help regardless, and stood by her brother with the Assassins.

Ezio became more quiet and distant during his late 40s, reluctant to share information regarding his early life with associates such as Salaì, but also being more open with those he knew better and cared for. Near the end of his life, although he was still as loving and passionate when talking to his family, Ezio was far more gruff towards strangers such as Shao Jun. Although Ezio eventually warmed up to the Chinese Assassin, he explained that he wanted nothing more to do with the Assassin Order out of fear that the Templars would endanger his wife and children, presumably stemming from the deaths of his father and brothers.

It could even be said that Ezio had grown paranoid of strangers since, in comparison to previous seasons, he had not hired any help for his vineyard's grape harvest despite his worsening condition. In addition, Ezio was shown to have grown somewhat forgetful, possibly increasing his uneasiness with unknown people.

Ezio also seemed to be aware, or at least have a feeling, that his time was growing short, evidenced by his confession to Sofia, "I knew I would not have time to do everything, now I worry that I don't have time to do anything," as well as his preparation of a final letter in the event of his death. 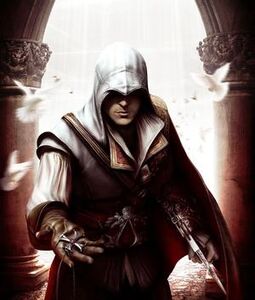 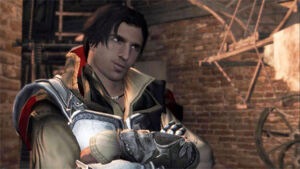 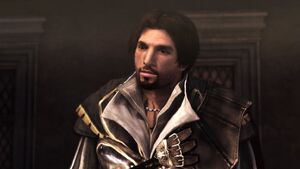 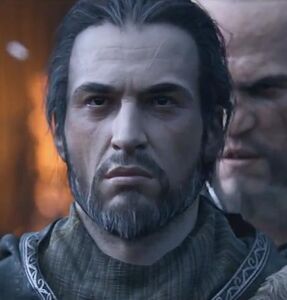 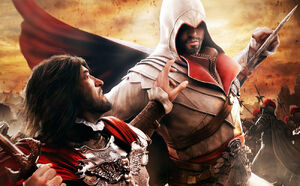 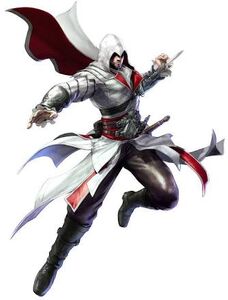 Ezio Auditore, as he appears in Soul Calibur V
Add a photo to this gallery

Retrieved from "https://hero.fandom.com/wiki/Ezio_Auditore_da_Firenze?oldid=2094905"
Community content is available under CC-BY-SA unless otherwise noted.