Ezlo (The Legend of Zelda)

Ability to become a parachute for Link

Teaching Link about upgrading the Picori Blade into the Four Sword.

Stop his apprentice Vaati from taking over Hyrule.

Ezlo is Link's main companion in The Minish Cap. He has the appearance of a green cap, like the one Link usually wears for his adventures, but with a face resembling a bird, with a huge yellow beak and cartoony eyes.

Ezlo gives Link advice and background of the current situation throughout the adventure, both spontaneously and on demand, with use of the Select button. Ezlo's main use, gameplay-wise, is to shrink Link to Minish size whenever he nears a Minish Portal. He also serves as a parachute when Link jumps into whirlwinds, similar in use to The Wind Waker's Deku Leaf.

It is revealed that he was cursed by his apprentice Vaati and turned into a green cap with two eyes and an bird beak. In order to get freed from Vaati's curse who turned bad by corruption and madness, Ezlo finds Link and helps him to stop his apprentice Vaati from taking over Hyrule.

After Vaati's death, Ezlo was freed from Vaati's curse and reverted back into his true form, he then offers Link an real green lifeless cap after Zelda was restored from stone back to flesh and blood by Link with the Four Sword. 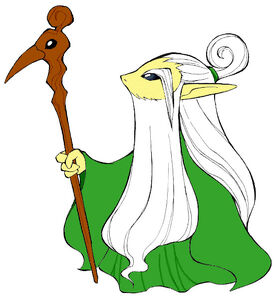 Ezlo's true form from The Minish Cap manga (albeit colored). 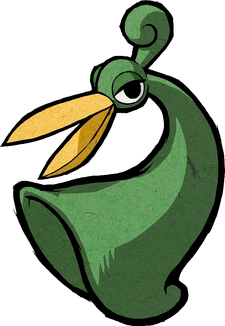 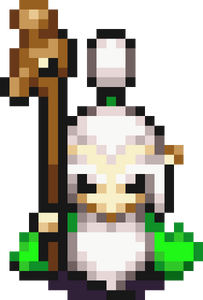