He is voiced by Geoffrey Rush.

In the books, Ezylryb was once a warrior called Lyze of Kiel and was part of the Kielian League in the Northern Kingdoms and took part in the Battle of the Ice Claws. Lyze retired after his mate Lil died and became a scholar at the Great Ga'Hoole Tree. It was there that Lyze changed his name to Ezylryb (by rearranging his name and adding ryb (meaning teacher) at the end of it).

In the film, it is revealed that during the Battle of the Ice Claws, Ezylryb battled Metal Beak (who was originally called Surtr (as revealed in the video game)) and was responsible for disfiguring him, resulting in the evil owl wearing his signature mask.

Role in the books

Ezylryb acted as Soren's mentor at the tree, but later died of old age not long after Soren's nephew Coryn arrived at the tree.

Ezylryb is first seen at the start of the film in a flashback to the Battle of the Ice Claws fighting Metal Beak. He makes his first proper appearance at the Great Ga'Hoole Tree watching Soren telling Boron, Barran and the other Guardians about the Pure Ones moonblinking owlets to mine flecks. Ezylryb supports Soren's claims to which Boron sends a Guardian named Allomere and two scouts to investigate the Pure Ones base at St Aegolius. Later Ezylryb rescues Soren after the latter loses control of his flight whilst flying through a rainstorm. At Ezylryb's hollow, Soren learns of his past as Lyze of Kiel, but is disappointed that Ezylryb dislikes his past.

Later after Allomere returns to the tree with two moonblinked owlets (one of them being Soren's younger sister Eglantine), he says that the two scouts were killed Pure Ones. Ezylryb tells Soren to tend to Eglantine whilst he and the other Guardians go to fight The Pure Ones. However upon arriving at St Aegolius, the Guardians are pinned to the ground by the power of flecks after Allomere (who is in league with the Pure Ones) lures them to a trap. They are about to be killed by bats, but are rescued by Soren and his friends after Eglantine reveals Allomere's alliance with the Pure Ones (saying that Allomere didn't rescue her but instead was given her by her and Soren's older brother Kludd(who was also in league with the Pure Ones)).

Afterwards, Ezylryb confronted and overpowered Metal Beak, but was attacked by the latter's mate Nyra. Fortunately, Soren (after battling Kludd, who supposedly died after falling into a forest fire) comes to his mentor's aid and kills Metal Beak to stop him destroying another owl's life like he did to Kludd. A shocked Nyra and the other Pure Ones to retreat from battle. Ezylryb comforts Soren, telling the young owl that he did the right thing.

After Soren and his friends are made full Guardians, they join Ezylryb in a flight. 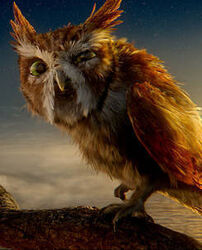 Ezylryb in Legend of the Guardians: The Owls of Ga'Hoole