Serving the Mana Tree and the Mana Goddess.
Guiding those she chooses as her hosts.

Faerie, titled Spiritual Seed of the Tree of Mana, is one of the protagonists of Trials of Mana, which was previously only released in Japan in 1995 as Seiken Densetsu 3. She is a fairy who hails from the Sanctuary of Mana, venturing from there alongside other faeries to find the hero who will draw the Sword of Mana to combat the evils plotting to bring ruin to Fa'Diel.

She is voiced by Maaya Uchida in Japanese and Stephanie Panisello in English.

Faerie has long blonde hair and blue eyes. She is shown wearing a short blue dress and barefoot. Her hair a single ponytail with purple flower ornaments. Her ankles have two golden anklets.

Faerie is one of several of her kind that lived peacefully in the Mana Sanctuary until the power of Mana mysteriously began to weaken. Sensing that the world is in danger, she and other faeries begin travelling across the world in search of heroes who would help them restore balance to Fa'Diel. However, several of her colleagues die along the way, leaving her as the only survivor, and she collapses during her travels. Luckily, she is found and saved by the main character, whom she chooses as her host. The character who becomes her host is the main character and depends on who was chosen as said character. This also marks the moment that the main character becomes the one who will eventually draw the Sword of Mana. Faerie then urges the main protagonist to meet up with the Priest of Light in Wendel.

Faerie and her friends soon travel across the world, looking for the Mana Spirits that reside near the eight Mana Stones of the world. Of course, their efforts to find them to borrow their power are made complicated by the work of the three villainous factions the heroes oppose: namely, the factions of the Dragon Lord, the Masked Mage, and the Dark Majesty. Nevertheless, the heroes succeed in gaining the assistance of the Mana Spirits, and are able to gain entry to the Sanctuary of Mana, where they finally find the Sword of Mana. But as the heroes draw the sword, the unsuspecting Faerie is kidnapped, and the evil faction that emerged victorious over the other two such factions makes a deal with the heroes where they give them the sword in exchange for Faerie. Her kidnappers depend on who was chosen as the main character; choosing Duran or Angela as the primary protagonist will have them as the Dragon Lord's faction, she will be abducted by the Masked Mage's faction if Kevin or Charlotte is the main protagonist, and if Hawkeye or Riesz is the main character, then the kidnappers will be the Dark Majesty's faction. After the heroes comply with the villains' deal, a horrified Faerie, realizing that the villains have released the Benevodons as a result of claiming the Sword of Mana for their purposes, urges the heroes to locate and destroy the Benevodons before they can gather and destroy the world.

After the heroes and Faerie locate and defeat seven Benevodons, they travel to the ancient city of Pedda to gather clues on the location of the eighth and final Benevodon and learn of the villains' main base of operations. Travelling there, they finally find find the Darkstone just in time to witness its shattering, which causes Zable Fahr, the Benevodon of Darkness, to reawaken. The heroes are able to defeat Zable Fahr, but then Faerie realizes to her horror that the deaths of the Benevodons have been infusing the Mana Sword with their power and thus making the main antagonist stronger by the minute. Faerie and the heroes then decide to head to the villains' main stronghold, where they manage to defeat them and reach their leader, only to be forced to watch helplessly as he absorbs the sword. Before he can display his newly-gained power to them, though, he is interrupted by the Goddess of Mana, so he departs for the Mana Sanctuary to attack the Mana Tree. Faerie and the heroes soon give chase after the main villain to the Sanctuary to stop him.

Upon returning to the Sanctuary, Faerie and the heroes notice the dire state it appears to be in; much of the plantlife there has withered, the water appears to be polluted, and the lands are being overrun by monsters capable of changing shape. They fight their way to the Mana Tree but arrive too late as they discover that the main villain has destroyed the tree and gloats to them that he is now free to display his new power and bring about his own vision of a new age for Fa'Diel. Faerie, both heartbroken and enraged over this atrocity, immediately attacks him to make him pay and stop him from bringing about his ideal new age despite growing weaker without the tree as understood by him, but is effortlessly swatted aside to the heroes' horror and concerns. But Faerie is not so easily killed by the villain's swatting, as she heals up the party after he swiftly knocks them all unconscious with a display of his new power. She lets everyone know that she and the heroes can work to build a new world even though the Mana power no longer exists due to the Mana Tree being dead, and explains that the Sword of Mana continues to exist inside the heroes and that as long as they keep fighting, the sword in their hearts called hope will never disappear. The main villain mocks Faerie's explanation about hope and vows to destroy whatever hope lies within them, but after a long and difficult fight, the heroes are able to defeat the main antagonist and prove her right, much to his shock and disbelief.

Knowing that the disappearance of the power of Mana would lead to her eventual death, Faerie thanks the heroes for saving everyone and fighting for the future of the world. When they plead for her not to leave them, she gladly tells them not to worry about her as she will be reborn as the new Goddess of Mana. Now reborn as the new goddess, Faerie lets them know that it would take thousands of years for Mana to be restored to the entire world and that, until she is needed again, she will quietly protect Fa'Diel as the reborn Mana Tree itself, before bidding them farewell as they return to their respective homes.

In the remake's post game, Faerie helps the heroes collect the spheres that will help them advance to their fourth class in their new quest to defeat the threat of Anise the Witch, who has arisen just while they are fighting to stop the main villain from ruining Fa'Diel. She recognizes to her surprise that Anise's powers are on par with those of the Mana Goddess, but nevertheless the heroes are able to defeat her. Anise tells them that she will come back as long as the Mana power exists in the world before disspipating, but Faerie is grateful knowing that the heroes will have the power to save the world from chaos knowing that they were triumphant in this mission of theirs.

Faerie serves as sort of a ninth Mana Spirit as well as the main ally of the six playable heroes of Trials of Mana, all of whom can be chosen for a party of three. Despite not being able to grant them any spells, she can aid them in certain situations with her own magical abilities, including but not limited to lowering the barrier that was preventing them from being able to reach Wendel. She also serves as an advisor at times, telling them where they should go next or explaining certain current situations to them. She is also tougher than she looks, as she was able to survive being swatted aside by the Dragon Lord/Masked Mage/Dark Majesty long enough to heal the party after they were hit by a devastating attack by him and urge them to keep fighting for everyone's future, and her strong bond with them is also what enables her to be reborn as the new Mana Goddess after the previous one was murdered by him through his destruction of the Mana Tree. 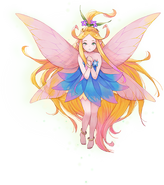 Promo artwork for the release of the Trials of Mana remake featuring Faerie and the six playable heroes.
Add a photo to this gallery

Retrieved from "https://hero.fandom.com/wiki/Faerie_(Trials_of_Mana)?oldid=2112148"
Community content is available under CC-BY-SA unless otherwise noted.