Being an item when not smashing Cranassian war machines to junks

Be a successful guest character.

Help her allies' cause.

Raiden Fighters 2 and beyond

Fairy is a magical humanoid creature that appears in every installments of Raiden series as either an item or in Raiden Fighters sequels, including Raiden IV. She became a playable character that has the power and speed of the Miclus and Slave.

At the end of Raiden III, she is revealed that the Fighting Thunder ME-02 was actually a fairy which took its shape by merging with a crashed predecessor to fight the Cranassians.

In Raiden Fighters 2: Operation Hell Dive and its various sequels, the Fairy's powers are not just the combination of Slave and Miclus, are gathered from only the positive aspects of both characters: Fairy inherits Miclus' passable maneuverability and flame stream bomb, (which seems somewhat stronger than the Miclus) which can demolish Cranassian War Machines in one or two flame stream bomb and Slaves' rapid fire 5-way spread shots that enables it to destroy minor enemies in a wide area very fast. Additionally, because of its small size, she easily dodges more bullets than other fighters.

It is true that Fairy does not possess chargeable special attacks or co-op special attack, but Fairy's stronger and extremely rapid-firing normal spread shots and her flame stream bomb which is more powerful than Miclus' more than make up for lack of said special attacks. All these factors make Fairy the most powerful playable character in RF series. 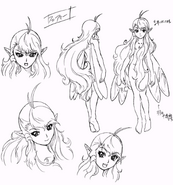 Retrieved from "https://hero.fandom.com/wiki/Fairy_(Raiden)?oldid=1866973"
Community content is available under CC-BY-SA unless otherwise noted.