That Old Lady (by Anastasia)

Aid Cinderella and her friends (succeeded).

The Fairy Godmother is a motherly, kind, and genuine character with an optimistically pure heart. She serves as a physical symbol of hope in Cinderella's life and speaks with a gentle tone. Though wise to a degree, the Fairy Godmother tends to be comedically absent-minded, and continuously loses sight of the obvious, and has a habit of both losing her wand and forgetting her magic words of "Bibbidi-Bobbidi-Boo". Even so, she can piece together her mind quickly enough and enjoys her ability to ensure dreams come true, and treats Cinderella as her own daughter, in a sense.

After her wicked stepsisters cruelly destroy the dress she plans on wearing to the ball when they recognize the beads and sash that they threw earlier, Cinderella runs out to the backyard of her stepmother Lady Tremaine's château near her father's fountain. There, she breaks down in sorrow as she has no way of getting to the ball now, beginning to lose her faith in dreams. However, her faith is still strong enough to summon her Fairy Godmother. Fairy Godmother explains that she has arrived to help Cinderella in her time of distress. To get her to the ball, she transforms an ordinary pumpkin into a carriage and four of Cinderella's mice into horses for the carriage. She attempts to turn Lucifer into something, but he flees, and it is unknown what he would have transformed into, or if he managed to dodge it.

She then turns Cinderella's horse, Major, into a coachman, and her dog Bruno into a footman. Finally, after Cinderella points out her tattered gown, Fairy Godmother measures Cinderella with her wand and bestows a beautiful white dress upon Cinderella, complete with two enchanted glass slippers that only Cinderella can wear due to their small size. Before she departs, the Fairy Godmother gives Cinderella a word of caution: at the stroke of twelve, the spell will be broken, and everything will return to normal. Grateful for the gifts anyway, Cinderella thanks her Fairy Godmother and happily rides off to the ball as Fairy Godmother bids her farewell.

In the second installment of the Cinderella series, Cinderella II: Dreams Come True, the Fairy Godmother is shown at the very beginning telling the story of Cinderella to the mice. Jaq, Gus, and the other mice then decide to create a storybook of their own, reflecting on various events that occurred since they first arrived at the castle.

The Fairy Godmother happily assists the mice in creating the book and actually appears in the second story: Tall Tail. Here, Jaq desperately wants to help Cinderella with her daily duties around the castle, but because of his small size, he cannot. Soon enough, Fairy Godmother appears and offers to help Jaq by turning him into a human - Sir Hugh - which he accepts. However, he causes more trouble as a human than he ever did as a mouse.

Cinderella III: A Twist in Time

In the third installment of the Cinderella film series, Cinderella and Prince Charming are celebrating an entire year together filled with magic and romance. Unfortunately, during the festivities, the Fairy Godmother accidentally loses her wand, which falls into the hands of Anastasia, one of Cinderella's stepsisters, who quickly takes it to her mother and sister Drizella.

As she witnessed Fairy Godmother's magic doings with the wand, she tries to convince her mother that it is magical. Lady Tremaine and Drizella find the conversation to be absurd until Fairy Godmother arrives, requesting the return of her wand. Anastasia fights her back, accidentally turning their cat Lucifer, into a half goose, half-cat hybrid. The astonishing sight convinces Tremaine, and Anastasia accidentally transforms the distracted Fairy Godmother into a stone statue (much to Anatasia's horror).

With the magic of the wand in her hands and no one to stop her, Lady Tremaine alters time and history, so that Anastasia was the one to fit the slipper. Fortunately, Cinderella, Jaq, and Gus catch on her plans, and battle against Lady Tremaine for the wand, win the battle, retrieve the wand and restore the Fairy Godmother. Alas the Fairy Godmother retrieves her wand, and she lastly uses it to restore Cinderella's wedding attire, which was destroyed by Lady Tremaine. Before the film ends, Fairy Godmother asks if Cinderella and Prince Charming would like to return to their normal lives, but the couple seems happy enough as it is.

In the television movie, the Fairy Godmother is played by Melanie Paxson. She is the headmistress of Auradon Prep and has a daughter named Jane who is shy and insecure but fascinated with magic, even if she doesn't let her daughter use it. When the descendants of the heroes' sworn enemies come to Auradon, they have been tasked by their parents to steal her magic wand.

While most of the kingdom is against the idea of villain kids coming to Auradon, Fairy Godmother attempts to be a mentor figure to the kids and tries to teach them how to be good in her new Remedial Goodness class.

During Prince Ben's Coronation, it is the Fairy Godmother's role to knight him using her wand. However, the wand is stolen by Jane, who had been manipulated by Mal, and the barrier to the Isle of the Lost is broken, allowing Maleficent to escape. When she appears at the Coronation, the Fairy Godmother confronts her with her wand, but is swiftly defeated and frozen. When Maleficent is defeated, the Fairy Godmother reveals that she has shrunk down to the size of the love in her heart (she is now a tiny lizard instead of a dragon) and uses her magic to unfreeze everyone else.

Despite her younger appearance in the film, Cruella refers to her as an "old bat". 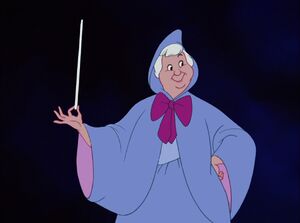 The Fairy Godmother in Cinderella 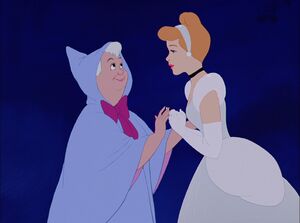 The Fairy Godmother with Cinderella 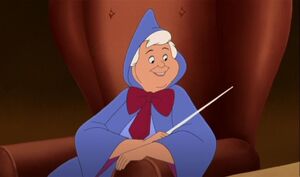 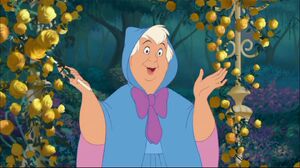 The Fairy Godmother in Cinderella III: A Twist in Time 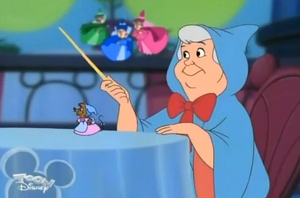 The Fairy Godmother in House of Mouse 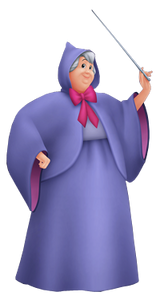 The Fairy Godmother in Kingdom Hearts 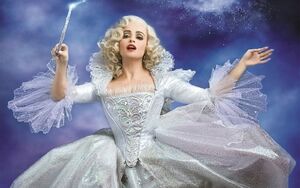 Helena Bonham Carter as the Fairy Godmother in the live-action remake.
Add a photo to this gallery

Retrieved from "https://hero.fandom.com/wiki/Fairy_Godmother_(Disney)?oldid=2183079"
Community content is available under CC-BY-SA unless otherwise noted.