Faith Connors, also known by her alias Phoenix Carpenter, is the main protagonist of the Mirror's Edge franchise. Described in the game as a "Runner", Faith carries items for revolutionary groups hiding from the totalitarian government. In addition to the game, Faith also starred in its comic tie-in, and appears in the game's reboot, Mirror's Edge Catalyst.

She was voiced by Jules de Jongh.

Faith was born into a family of four, growing close to her mother, Erika, while Kate grew close to their father. Faith’s parents were protesters against the rise of the new regime that was seeping into The City.

With her father providing funds and leadership to the Libertas movement, her parents brought their children to the November Riots where Erika was crushed to death as others sought to escape. After her mother’s death, her father became depressed due to guilt to the point of alcoholism.

At the age of 16, Faith left her father and Kate, presumably through a window at night, to live on the streets. Gradually resorting to petty thievery to survive she began robbing homes, including Mercury's Hideout. Catching her in the act, Mercury took her under his wing and trained her to work for him as a Runner.

Still in training, Mercury puts Faith on a training run to trial the new ear pieces given to him by Drake. Faith finds Clarence E. Kreeg being pursued by a masked assailant and moves to help him. As she tackles the assailant, Kreeg’s Messenger Bag is opened and surveillance photos of Abraham Connors, Faith’s father, spill out.

Unable to ignore the photos, even during her first official run, Faith visits her sister, Kate, who was in training to be a CPF Officer, in order to find out where their father was. Pointing her to Hoagy’s, Faith asks about her father appearing there but is lied to, only getting the truth when a worker there, Dusky, lets her look through the bar’s security tapes where upon she discovers her father meeting with Austen Reynolds.

Looking for new leads Faith goes after Red, the photographer who took the surveillance photos, and, with Mercury’s help, is shown a house where she assumed was where her dad was. However, the person waiting for her was actually Austen Reynolds, who was waiting for Abraham to kill him as revenge for the death of Erika Connors, Faith’s mother, as the two were, at the time of the Libertas movement, having an affair due to Abraham’s neglect.

Allowing her to leave with this information, Faith goes after Kreeg in order to find out who it was he was delivering the surveillance photos to. Infiltrating the given location she discovers the room belonging to Sebastian Silvine, head of Silvine Security Systems, however, while she recognized the company logo from a chip created by her mother, she was unable to get anything else due to having tripped an alarm and needing to escape from Silvine Security officers.

After delivering a package to Robert Pope’s office Faith head over to Drake’s hideout to see if he could identify what the chip might be for. Leaving the chip with him, Faith receives a call from Dusky to meet her at Hoagy’s where she finally meets her father, Abraham Connors. However, Austen walks in on the reunion but is shot dead when Silvine Security officers enter the bar looking for the Connors.

The pair managed to escape, however, and hid in Mercury’s Hideout where Faith asked him about the chip her mother had created. Unable to help her, her father did tell her about a series of break-ins at the family home where it seemed that someone had been looking for something but hadn’t found what they were looking for.

In an attempt to find this “something”, Faith breaks into their old family home, which was scheduled to be demolished. After receiving reports of someone breaking into the demolition site, Kate Connors deduces that it was Faith and confronts her at the house to get her out before the explosive blew. Managing to find a hidden letter from their mother, the sisters escape the site just in time.

Handing the letter over to Drake, he deduces that the chip and the notes in the envelope were for an advanced security camera to be used by Silvine Security and that that was the reason why the Silvine officers were chasing after them. Deciding that keeping the notes and chip was too dangerous, Faith opted to hand them over to Silvine, however during the escape she is shot in the arm and forced to stay out of action until it healed.

Fresh from being out of action and fully healed, Faith spends some time retraining with Celeste Wilson, another Runner and friend, before being put back on active duty. During her first run however she encounters some overzealous City Protection Force who, unprovoked, open fire on her and actively pursue her through the city until she manages to lose them by hitching a ride on a City Eye helicopter.

Laying low in Mercury’s hideout while Mercury asked around about why the Blues were being so aggressive, Faith overheard CPF radio chatter from her sister, Kate Connors, who was reporting in to conduct a follow-up check with Robert Pope about a series of break-ins that occurred the week previous. However, some time later, further CPF chatter announced the reporting of gunshots from the area and Faith, concerned for her sister’s safety, rushed to the scene to discover her sister next to the body of Robert Pope.

Certain that her sister was being set up for Pope’s murder, Faith took a piece of evidence from Pope’s desk (a slip of paper with the words “ICARUS” and “to the highest” written on it), and escaped the Blue forces to begin an investigation into proving Kate’s innocence. After discussing it with Mercury and Celeste, her first port of call was to question Jacknife, an ex-Runner, who might have known something about the set-up.

After chasing him down, Jacknife points Faith towards Pope’s head of security, Travis Burfield. Before going after Ropeburn, however, Faith gets in contact with Kate’s CPF superior, Lt. Miller, to get an update on Kate’s predicament. Infiltrating the Z. Burfield Int. Shipping offices, Faith overhears Ropeburn discussing a meeting with an unknown individual over the phone, also mentioning Project Icarus and Kate and Faith.

After informing Miller of this information, Faith goes to interrupt the meeting however she discovers Miller already there and assumes that he was the individual on the other end of the phone. Confronting Ropeburn to get answers, Faith manages to learn of another meeting place in the New Eden Mall before an assassin sniper shoots and kills Ropeburn. Faith’s second attempt at overseeing this meeting met a similar end, with her catching sight of the assassin sniper but running into, and escaping, an ambush set up by the Blues.

Fresh out of leads, Faith decides to look into Pirandello Kruger Security as she had seen their symbol on various papers throughout her investigation. Inside the building she stumbles upon a training facility created for the purpose of creating a specialized unit of Pursuit cops to target and take down the Runners network. Her infiltration eventually led to her boarding a shipping boat, belonging to Z. Burfield Int. Shipping, and capturing the assassin responsible for both Ropeburn’s and Pope’s murder; Celeste.

Her sister had been tried and found guilty for Pope’s murder during her investigations, Faith, with help from some fellow Runners, interrupted the convoy that was transporting Kate to prison and freed her sister. However the Blues managed to track them back to Mercury’s lair; resulting in Kate’s recapture and Mercury’s death.

Determined, Faith infiltrated the Shard building to rescue her sister. Finding an ally in Lt Miller, Faith, in her battle against the Pirandello forces, caused the destruction of the city’s surveillance servers in order to gain access to the roof where she discovered Jacknife escorting her sister to a drop-off helicopter. Undeterred, Faith jumped onto the helicopter, resulting in the death of Jacknife, and finally managed to save her sister.

After the ending of the game it is announced that Faith and Kate had become wanted fugitives and were being hunted by police forces. So far, they remain at large.

Faith has a short black hair stylised into a angular bob. She mainly wears a black tank top with white stripes running down on each side underneath her arm. She wears white cargo pants and special running shoes. She has a runner’s tattoo running down her right arm, and an arm warmer and red shoes and a single fingerless glove. She has a tattoo on her right eye. 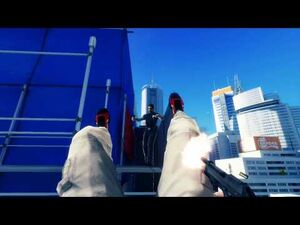 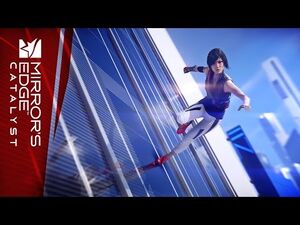 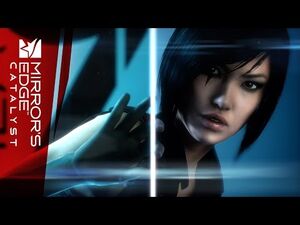 This article contains content derived from the "Faith Connors" article on the Mirror's Edge Wiki, licensed under CC-BY-SA.