Starfighter
Falchion β is one of the four protagonists of Gradius Gaiden. It is one of the newer fighters created by the Gradius Empire, alongside the Jade Knight to assist the Vic Viper and the Lord British in the war against the Bacterians. Unlike the other fighters, which use more defensive and strategic armaments, the Falchion β concentrates more on offensive tactics, and those uses more powerful weapons.

Sometime between the events of Gradius III and Gradius IV, the Gradius Empire got into a confrontation with the Bacterians. Unlike previous encounters however, the Bacterians used more advanced technology, making them much more prepared for an assault against Gradius. To counter this however, the Gradius Empire deploys not only the Vic Viper to stop the evil empire, but also the Lord British, as well as to newly released fighters called the Jade Knight and the Falchion β; each of the four fighters has their strengths and their weaknesses, making them useful for different approaches to stop the imminent invasion.

All four crafts travel across familiar and unfamiliar worlds, where they all encounter and defeat various Bacterian troops. Afterwards, they locate the source in the Black Nebula and destroy it whilst narrowly escaping destruction, bringing an end to the Bacterians once more.

The Falchion β's weapons are notably stronger than the other three crafts, and thus makes it a great choice for offensive confrontations. 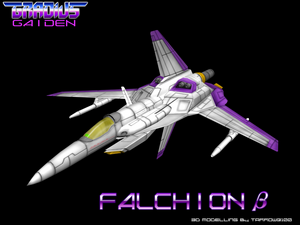 Retrieved from "https://hero.fandom.com/wiki/Falchion_Beta?oldid=2035324"
Community content is available under CC-BY-SA unless otherwise noted.