Spending time with his older brother and friends.

To inherit the Armored Titan to ensure that Gabi doesn't (abandoned, matter solved itself).

Falco Grice is a major supporting character in the anime/manga series Attack on Titan. Falco is an Eldian boy who grew up in Marley and is a candidate for the Armored Titan. He intends to inherit the Armored Titan in order to ensure her fellow candidate, Gabi Braun, does not inherit it because it shortens one's lifespan and due to the crush he has on her. After being transformed into a Pure Titan by Zeke Yeager, the mindless Falco devours Porco Galliard, inheriting the power of the Jaw Titan.

He is voiced by Natsuki Hanae in Japanese and by Bryson Baugus in English. The former also voiced Tanjiro Kamado.

Falco Grice is a short boy with a small build. He has short, light-brown hair and light hazel eyes. As a Warrior candidate, he wears a standard Marleyan uniform consisting of a light jacket and pants, suspender straps, a hard hat, and combat boots. As per the law, Falco is forced to wear an Eldian armband to signify that he's an Eldian.

When transformed into a titan, Falco's pure titan form was very tall and lanky with a very long neck and no distinguishable lower jaw, comparable in height to Reiner's Armored Titan. Its mouth was noticeably rounded, with the upper jaw connected with the base of its nose.

This form of Falco is actually a hybrid form of Beast Titan and Jaw Titan when Falco at first accidentally consumed Zeke Yeager's (who is the current Beast Titan) spinal fluid, then subsequently devoured Porco Galliard who was the owner of Jaw Titan (Porco sacrificed himself to bring Falco back to his sanity and to save Reiner Braun). As the Jaw Titan, Falco's titan form shrunk down to merely five meters in height and possesses a much more muscular build similar to previous Jaw Titans.

His Titan form possesses two sets of jaws, with the outer set capable of piercing through harder objects such as Titan armored skin. His titan form initially takes on some avian features, with the outer jaws reminiscing a bird's beak and his legs being shaped like talons. Upon gaining better control of his titan form, Falco fully takes on the appearance of an avian creature, with a large set of wings and a more prominent beak.

Falco Grice is a rather shy individual who lacks confidence in himself. Despite this, he does not hesitate to put himself in the line of fire to protect others, as seen when Gabi is under fire during a battle, and he leaps in to to protect her.

Falco is a very compassionate individual, having gone out of his way to rescue Gabi and even choosing to bring an enemy soldier from the battlefield into the trench in order to fix his wounds. He also comes to the aid of a war veteran in his homeland, conversing with him and even mailing his letters for him. Unlike other warrior candidates who wanted to inherit a titan in order to fight for Marley or to eliminate the "island devils", Falco only wants to inherit the Armored Titan for Gabi's sake and to make sure she doesn't shorten her lifespan.

He initially had a lack of self-confidence, but after talking with Reiner and Mr. Kruger, both of them inspire him to assert himself more and have more confidence in his abilities, which allow Falco to perform significantly better in his training. In spite of this, Falco still remains very humble, viewing the praise given to him by his fellow Warrior candidates as embarrassing and "not a big deal", instead attributing it to Mr. Kruger's advice.

Despite his young age, Falco is actually much more emotionally intelligent and empathetic than he appears: while several other fellow Eldians and Warrior candidates view the people on Paradis Island as "devils" and being a chosen inheritor for a Titan as a reward, Falco is not blinded by this false belief and understands that being a Warrior is actually more of a curse since it shortens the user's life, and the inheritor is only used for combat and war.

When Mr. Kruger reveals that he's actually Eren Yeager and that the letters he was sending were to Eren's allies, Falco was deeply shocked and disturbed, but upon hearing what the Warriors did to Eren's home, he understands the reasoning and takes to heart what Eren said that people are all the same. Even after his hometown Liberio is attacked and several of his friends are killed, Falco assumes that this was down out of retaliation for Marley's first attack. Because of this, he also does not hold any hatred or prejudice towards the people of Paradis Island in comparison to others of his age or his superiors.

Falco Grice is a member of the Grice family, an Eldian family forced to live as second-class citizens due to Marley's discrimination against Eldians. As he grew up, he eventually chose to become a Warrior candidate to inherit one of the Nine Titans.

Falco is first seen on the battlefield alongside his fellow Warrior candidates fighting the war against the Mid-East Allied Forces. During the battle, Falco is wounded but is saved by his older brother, Colt, who brings him to the trenches where he is treated by his fellow Warrior candidates. When Gabi offers a plan to take out the anti-Titan artillery, Falco is greatly concerned for her safety. When her plan succeeds, she attempts to flee but is nearly shot by a surviving gunman. Falco immediately rushes out of the trench to try and save her, but then, their ally Porco Galliard transforms into the Jaw Titan and shields them from gunfire while they duck into a ditch.

When returning to the trench during the attack of the Marleyan infantry, Falco brings a wounded enemy soldier with him. He is scolded by his superior, Koslow, and Gabi for his actions, the latter insinuating that he is only behaving like that to outshine her by acting obedient to international law, and that it won't be enough for him to inherit the Armored Titan. He later watches as Reiner, Zeke, Porco, Pieck and her Panzer Unit all eliminate the remaining Allied Forces, but is shocked that Reiner's armor was broken through by the anti-Titan artillery.

After the battle, he stands alongside his Warrior candidates, who are worried that Titans will no longer be the dominant military power and that Eldians will no longer be of use to Marley, while Gabi is concerned for her elder cousin. Falco gives them reassurance, and tells Gabi that Reiner has survived dismembered limbs and even a severed head. Reiner arrives, and Falco coldly salutes him. When Falco suggests Reiner rests, Gabi retorts that Falco should be the one resting.

Later that night, Falco is in a train watching as Gabi is praised by all the Eldians for her bravery in the battle. Falco bitterly states that Reiner now only has two years left to live, and if Gabi inherits the Armored Titan, she'll only live to be twenty seven years old, going so far as to say that Reiner doesn't care about Gabi's shortened life. Reiner frightens Falco by threatening to report Falco's behavior as incriminatory evidence that will have Colt's candidacy for the Beast Titan removed. Falco salutes and says that it is an honor to inherit the power of the Titans and proclaiming that he'll be the one to inherit the Armored Titan. Reiner leans closer and silently tells Falco that he must surpass Gabi if he wants to save her from the cursed fate of being a Titan Shifter. 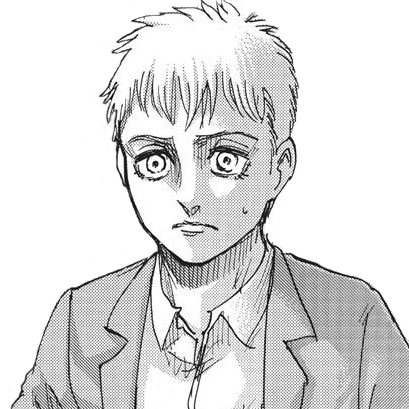 Falco in the Manga. 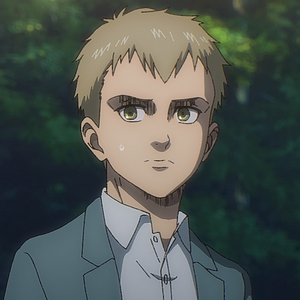 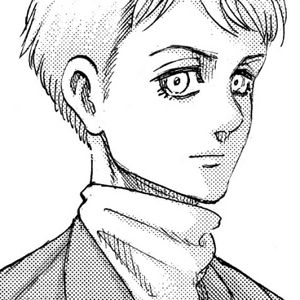 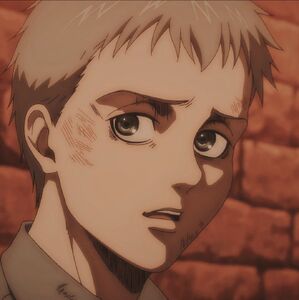 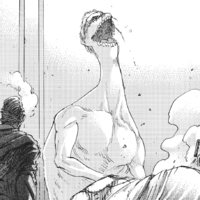 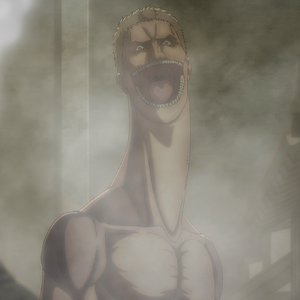 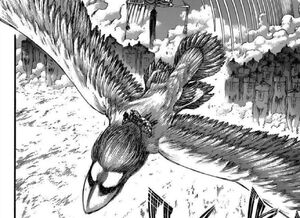 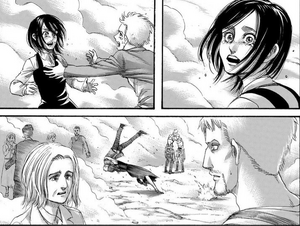 Falco reunites with Gabi, after the latter returned human. 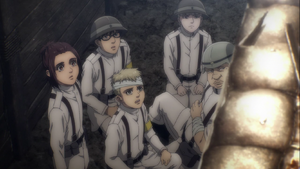 Falco on the battlefield with Gabi, Udo, Zofia, and Koslow. 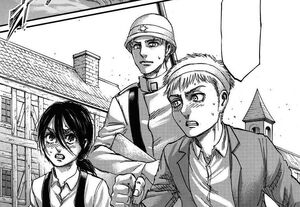 Colt with Falco and Gabi blushing at each other. 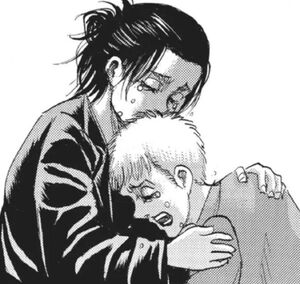 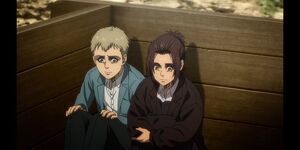 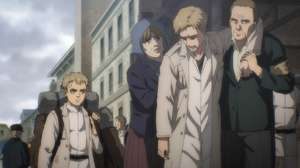 Falco with his parents and his brother Colt. 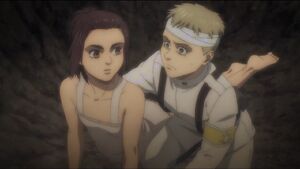 Gabi and Falco in the timeskip epilogue. 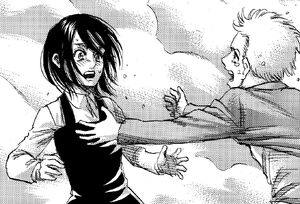 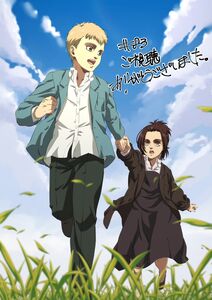