Superhero
Falcon, (real name Samuel "Sam" Wilson), is a member of the Avengers, and was formerly a trainee agent of S.H.I.E.L.D.. A promising genius with both technology and science, he secretly worked with Tony Stark on technological advances and special armors.

When Iron Man, presuming Captain America had been killed by the Red Skull, activated the Avengers Protocol to reassemble the Avengers, Agent Sam Wilson responded to the call in the Project Red-wing armor. Taking the identity "The Falcon", Sam Wilson joined the Avengers and was subsequently fired from S.H.I.E.L.D. by Nick Fury. He rejoined S.H.I.E.L.D. since the Avengers split in two teams, but resigned after Ultron was defeated.

Sam Wilson was recruited into S.H.I.E.L.D. and was one of the best recruits in the S.H.I.E.L.D. Training Program. He worked secretly with Tony Stark aka Iron Man, who took him under his wing. He had access to the Hall of Armor and was welcome to use the equipment in a time of crisis.

After Captain America is vaporized by the Red Skull, Iron Man activates "The Avengers Protocol," calling the team through a hologram device to a meeting. The heroes selected by Stark are Falcon, Thor, Hawkeye, Hulk, and Black Widow. Sam left the training program mid-session, much to the annoyance of Nick Fury. He runs to the Hall of Armor and selects Project Redwing. The Avengers fly to the Hydra Base in Antarctica, and learn that Captain America is still alive, and was unreported by M.O.D.O.K. to undergo a body change with his mortal nemesis the Skull. He arrives in the Falcon armor and is ordered by Iron Man to knock Captain America, which he does, despite protesting. A massive battle ensues, and they end up rescuing Captain America. After his defeat, the Skull strips Tony of his Arc Reactor and Armor. Now clad in the armor, he calls himself the "Iron-Skull". As Tony lies there dying, he asks Captain America for help.

The team find the Quinjet blown to pieces. The only option is for them to all squeeze into the S.H.I.E.L.D. Flying Car. They rush him back to the Avengers mansion, where Sam hooks Tony up to machinery to restart his heart. M.O.D.O.K. uses special nanobot that can make the Avengers turn on each other. During the Sparring session, the nanobots attack and infect them. They all battle each other with only Tony left uninfected. He cures his allies using a concentrated EMP. They find the Skull, who was trying to steal Tony's tech; he is stopped, but still has time to teleport away. It is then that Tony discovers the Mansion's reactor was about to blow. The team must work together to stop the explosion. They create a vortex shooting the explosive energy into the sky. The team now move to Stark Tower where they set up home as now a official team

Ghost of a Chance

The Avengers battle Space Phantoms, extra-dimensional beings who can replicate them right down to cellular level. The creatures replace them one by trapping them in Limbo. But Sam is able to save the team, and working together, they take down the alien invaders.

The Serpent of Doom

The Avengers battle Doctor Doom as he uses the Asgardian weapon Cudgel to release the Midgard Serpent, with hopes of using it to conquer the globe. The creature is too powerful, and would continue to grow until it consumes the Earth. After a battle with the Avengers, he and the creature are banished to the Realm Below using the extra-dimensional portal used by Ulik.

The Avengers battle Dracula, who had kidnapped Black Widow and turned her into a Vampire. They travel to Transylvania and confront him at Castle Dracula. He reveals that he was an ally of Captain America during World War II, working together to defeat the invading Hydra forces. He wants the Super-Soldier Serum in Cap's blood, which will allow him and his subject the ability to go out in the sunlight. During the fight, he drinks the Hulk's blood, absorbing his powers, and turning the Hulk into a Vampire. However, the Hulk's gamma cells act like tiny suns, and he burns away the infection, which also weakens Dracula. In his defeat, his minions drag him underground to safety.

He was captured along the other heroes by the Collector but was soon freed by She-Hulk and Skaar.

Justin Hammer sends a video message to the Avengers, inviting them to come to his company, so he can show off his new invention: The Super-Adaptoid. The Avengers make quick work of the Adaptoid, prompting Hammer to rebuild the robot and send it to Avengers Tower to attack the team. After a lengthy battle, Captain America and the Avengers manage to destroy the Super-Adaptoid again.

On his day off from working for the Avengers, Falcon went with Hawkeye to a carnival where he became annoyed by his constant winning of stuffed bears as prices for having succeeded in the games there, leaving him be before Hawkeye was confronted by Black Widow who informed him of Molecule Man returning. Falcon overheard Hawkeye, who as being told by Black Widow not to inform Iron Man, swear that he would be angry, leading Falcon to question the pair on what he meant. When they failed to convince him that they were discussing a "surprise poker party", Falcon left the two alone.

Hawkeye and Black Widow went after Molecule Kid and despite their efforts, were not only unable to retrieve his wand from him without the interference of the other Avengers as they intended thanks to Captain America coming to save the pair after they were stopped in their tracks by Molecule Kid who trapped them in "honey" but also had to deal with the M.O.D.O.K.-controlled Super-Adaptoid intervening as well. Falcon came to their assistance, flying over Hawkeye and Black Widow as they argued and called for one of the pair to free Captain America, who had been caught in a bent pole made to bend by Molecule Kid's wand. Falcon gave his all against the Super-Adaptoid but found it difficult to significantly harm it, prompting the other Avengers to assist him until Iron Man arrived and broke the wand when trying to get it out of the hands of Molecule Kid.

The wand's shattering sent the group into an alternate dimension, which Falcon was caught into. There, he assist in attempting to stop Super-Adaptoid from harming Molecule Kid and the others by holding him down as Iron Man, Hawkeye and Black Widow convinced him to assist them in using the wand to return things to normal. Once this was done, the group returned to their normal dimension.

Being the newest member of the Avengers, Falcon's personality is an extension of his inexperience. When he first joined the Avengers, Falcon was a jittery, extremely self-conscious, and oblivious, although an adept, young superhero, who longed to fit in with the member of the team and eager to please. Set on making a good impression, Falcon would go out of his way to make sure the Avengers were comfortable; bringing homemade cookies made by his mother as concession to a team meeting.

He can occasionally lose focus when impressed by something, but can regain his concentration when corrected. An avid fan of all his teammates, especially his mentor Tony Stark, Falcon oftentimes came off as a glorified admirer rather than an actual asset to the Avengers. He would also sometimes expression grandiose delusions when commended by his older teammates, adding more to his anxious personality. Mending Iron Man after the loss of his Arc reactor, both he and Captain America expressed their gratitude towards Falcon. Readily starstruck, he asked them both to reiterate their words of praise back into his cellphone, wishing to make it his ringtone. Falcon also showed a apparent fear of the Hulk, as many do.

For all his inexperience, Falcon is enthusiastic and determined to make up for his ignorance. Being gifted in the intellectual arts, he is inspired when solving acts of heroism using his head more then his powers. His skillset was apparently infamous within the ranks of S.H.I.E.L.D. training class; when Iron Man set out the call, activating the Avengers Protocol, re-gathering the team so that they can avenge Captain America, Falcon was in the middle of training with Nick Fury when the call came and abandons his training session, though not before Nick Fury put his reputation into question due to his shift in behavior.

Gamma-Radiated Physiology : During the episode "Hulk Out Heroes", Falcon was infected with a virus which grants him Hulklike powers and abilities.

Bionic Physiology : During episode "The Ultron Outbreak", Falcon was infected with a virus created by Ultron which grants him cybernetic body and super human powers.

Naturally Enhanced Physiology: Through special dieting plans, rigorous training, meditation techniques & exercise regimes, he had developed the physical abilities that are at the limits of human perfection. He even managed to recover from physical trauma caused by the Hulk landing on him within a day or two.

Genius-Level Intelligence: Like his mentor Iron Man, Falcon shows a remarkable proclivity toward science. He is gifted in at least physical sciences, being able to determine the specifics needed to siphon a vortex of energy into space with minimal communication of the idea. Additionally, Falcon had absorbed an extensive knowledge about the inner-workings of the Arc reactor and the Iron Man armors. An example of this can be seen when he restarted a dying Tony Stark's heart, using only the equipment available to him within the Stark's laboratory. Falcon is also a genius when comes to tactics and preparations. When he was S.H.I.E.L.D., he studied the Avengers and devised countermeasures and contingency plans in taking them out if they ever turn evil or succumb to mind control.
Expert Hand-to-Hand Combatant: As a former member of S.H.I.E.L.D, Wilson is highly trained and skilled in hand to hand combat. Wilson's fighting style include a combination of firearm improvisation, flight maneuvers such as swooping and aerial grappling, and modern army combatives. Wilson's modern army combatives derive elements from Muay Thai, American Boxing, and Taekwondo.
Master Acrobat: In order to withstand the equilibrium shifting caused by flight, Wilson is an expert acrobat. Usually during his battle with powerful foes, Wilson had to couple his acrobatic skills with his flight maneuvers to avoid being shot from the sky.
Master Pilot: Wilson displays the utmost skill when flying with his Red-Wing armour; he can perform many advanced and complicated maneuvers while in midair.
Master Marksman: Wilson is a very accurate marksman skilled in sharpshooting, as he has shown with his retractable sidearms and expertise in using his armour's wing projectiles 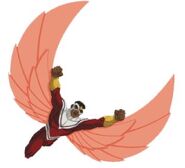 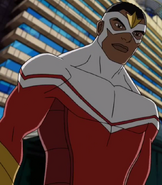