Bambi's love interest and later wife
Princess of the Forest

To stay and be with Bambi all her life

Faline is the tritagonist of the 1942 film Bambi and its 2006 midquel Bambi II. She is the daughter of Ena, both Bambi's love interest later wife, the daughter-in-law of Bambi's Mother and the Great Prince of the Forest and the mother of Geno and Gurri.

In the first film, Faline is voiced by the late Cammie King as a fawn and the late Ann Gillis as a young adult whilst in the midquel, she is voiced by Andrea Bowen.

As a fawn, Faline has light brown fur with orangy-brown fur on top of her and head and down her back, blue eyes and white spots. In Bambi 2, She has darkier colouring.

As a young adult, Faline remains the same colour except she no longer has spots.

Faline is first appears when Bambi notices her reflection in a pond and runs from her and hides behind his mother who is with Faline's mother Ena. Faline says Bambi is bashful to which Ena replies that he might not be if Faline said hello to him. Faline does this and Bambi's mother encourages him to say hello back, causing Faline to giggle. Faline chases Bambi into a pool with reeds and pops her head out and licks him on the cheek several times. Eventually, Bambi starts to pursue Faline into the meadow where young bucks are gathering for the season.

Faline is last seen as a fawn, fleeing the meadow along with the other deer when Bambi's father the Great Prince of the Forest alerts them of Man's arrival.

Faline appears years later as a young adult and like previously has Bambi running away, but he gets his antlers caught in branches and then gets a lick on the cheek from Faline. Bambi becomes "twitterpated" and follows Faline, but runs into an older buck named Ronno who tries to get Faline to leave with him, causing a fight to start between him and Bambi in which Bambi wins and they begin their relationship and fall asleep together in a spot in the woods. Later, Bambi leaves while Faline is still sleeping to see that Man has returned.

Faline wakes up and finds Bambi gone and goes to look for him, only to run into Man's dogs who chase her onto the top of a rock. Luckily, Bambi arrives and fights off the dogs, giving Faline time to escape and along the other animals flee the forest after a fire starts due to Man's campfire. Bambi, along with the Great Prince, emerges from the fire alive and well and reunites with Faline.

At the end of the film, Faline becomes mother to her and Bambi's twin fawns Geno and Gurri.

Set in between the events of Bambi's mother's death and Bambi's young adulthood, Faline first appears when she goes to see the groundhog to see if spring is on the way, where she meets Bambi again. After the groundhog doesn't see his shadow, meaning spring is on the way, he runs back into his burrow after being frightened by an older fawn named Ronno (the same buck who years later would battle Bambi over Faline) much to the dismay of Faline, Bambi, Thumper and Flower. After this, Faline leaves to return home with Ena, whilst Bambi waits for the Great Prince.

Faline later appears with Ronno (who tries to impress her with a tall tale) when she hears Bambi yelping and goes to him with Ronno not far behind. She then witnesses Ronno chasing Bambi and Thumper after Thumper caused Bambi to knock Ronno into mud. She later appears with Thumper and Flower when Bambi bids farewell to them when he prepares to leave with his adoptive mother Mena.

Faline is last seen months later listing to Thumper's tall tale of Bambi fighting Man's dogs, before a now teenaged Bambi arrives. A porcupine jabs Bambi with his quills, causing him to kiss Faline and they smile at each other. Just then the Great Prince arrives for Bambi to which Thumper laments that Bambi doesn't have time for them anymore to which Faline says "isn't it great". 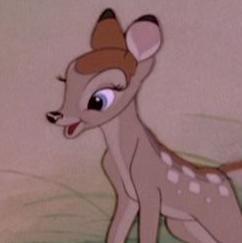 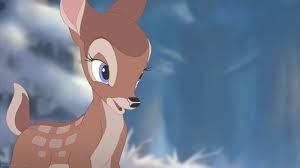 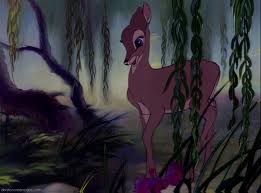 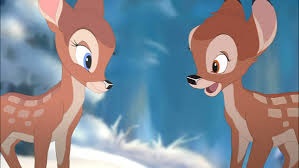 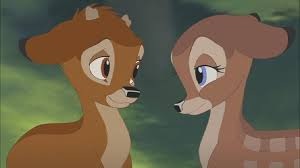 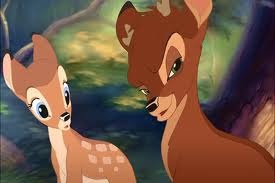 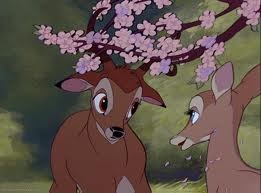 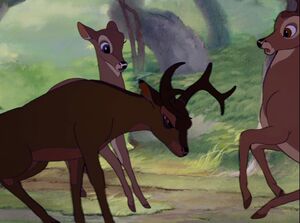 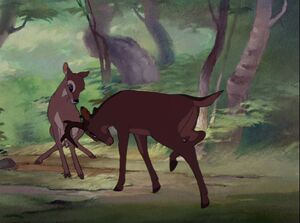 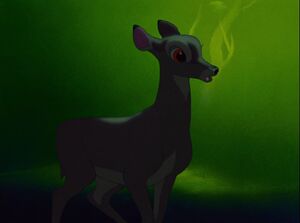 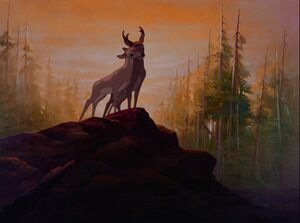 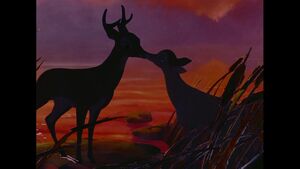 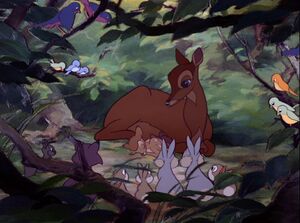 Faline with her children Geno and Gurri 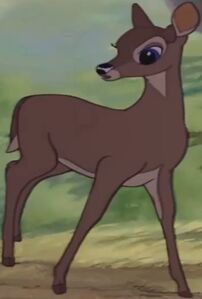 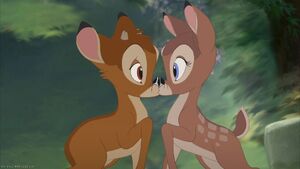 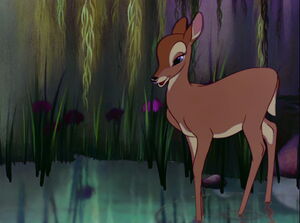 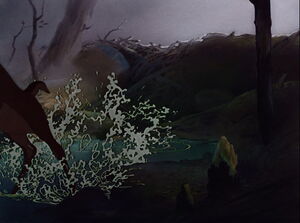