Ability to wield the staff

No information
Fan la Norne is one of the characters from Xenoblade 2. Praetor Amalthus is her Driver. She is the Goddess of Indol and is the envoy for the Indoline Praetorium. She has the ability to limit the power of not only other Blades, but of Titans as well.

In Xenoblade Chronicles 2: Torna ~ The Golden Country, Haze is a Special Legendary Blade. She can grant tremendous power to her Driver Lora and her allies. Haze uses the wind element, wields a Crosier, and acts as a Healer in battle.

She was voiced by Saori Hayami in the Japanese version, and by Samantha Dakin in the English version.

Under the name Haze, Fan was once the Blade of Lora during the Aegis War. Lora commonly used Haze's power in order to limit Mythra's abilities while sparring with Addam. Some time after the Kingdom of Torna's destruction and Lora's death, Amalthus bonds with Haze and becomes her new Driver; she takes on the name Fan la Norne and is worshiped as the Goddess of the Praetorium.

Fan appears in the Abandoned Factory of the Empire of Mor Ardain after the party fights with Patroka and Mikhail. She is able to stop Patroka from attacking them with her full power, and the two escape on the Monoceros. Fan asks Rex to come and speak with Amalthus, and travels with the party to Indol.

Talking to Rex and Nia near the mural in the Sanctum, she mentions that the memories of her past life are missing. She later accompanies the party to Temperantia, where she uses her powers to weaken the Judicium Titan, allowing the party to board and fight Aeshma's Core. After Jin battles the party following the defeat of Aeshma's Core, he kills Fan atop the Judicium weapon by stabbing her through her Core Crystal.

Her state funeral was later held in Seoris Plaza after the Ruler's Congress in Indol. During the funeral Mythra and Nia discuss how unusual it is that her body did not disappear after her death, as this is the case for all Blades with the exception of Flesh Eaters. Mythra then mentions that her Core Crystal was originally diamond shaped and that half of it appears to be missing, suggesting that someone may have stolen it.

During chapter 8, Amalthus reveals to the party that he had absorbed half of Fan's Core Crystal before the events of the game, adding to his powers as a Driver of an Aegis. He then uses the powers to control Mythra, and by extension Siren, and eventually to control the Titans so that they approach the World Tree. 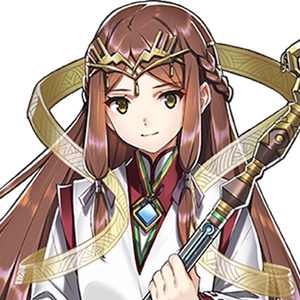 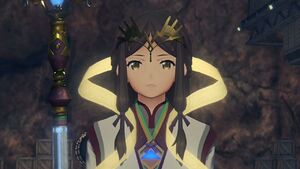 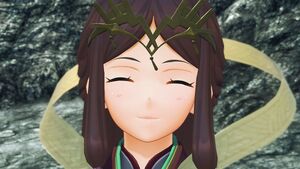 Haze in Torna ~ The Golden Country 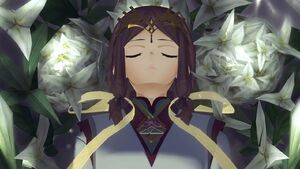 Fan's body during her funeral 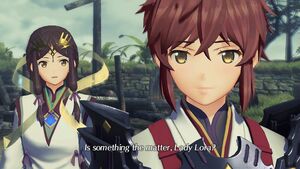 Lora and Haze in Torna ~ The Golden Country
Add a photo to this gallery
Retrieved from "https://hero.fandom.com/wiki/Fan_la_Norne?oldid=2093659"
Community content is available under CC-BY-SA unless otherwise noted.