Fanboy is one of the two main protagonists of Fanboy and Chum Chum. He has a sidekick and a best friend named Chum Chum. He is an enthusiastic fan of comic books, action figures, fantasy, and science fiction.

Fanboy has a very active imagination, a desire for fun, and adventure and he enjoys spending most of the time with his best friend.

Fanboy's decisions often get him and the people around him into trouble.

He is voiced by David Hornsby.

Fanboy is free-spirited and ready for anything. He and Chum Chum are always doing lots of things together, and often have fun together. They have several friends, and will occasionally be strong and fearless. Like Chum Chum, Fanboy enjoys Frosty Freezy Freezes (a slushie drink based off of their favorite superhero, Man-Arctica), and is bullied by Boog. He is the leader of his main group of friends: Chum Chum, Kyle, Oz, and Yo. He is extremely hyperactive, and loves candy. Fanboy is unaware that he is hated by many people, such as Lenny and Kyle. He and Chum Chum unintentionally annoy them often, and even though they respond in a bad way, he still thinks of them as friends. Fanboy claims to be good with animals, and even knows how to care for them. However, he has a tendency to get mad at some times. If he is bullied and tormented enough, he becomes fused and demands it to stop. When he becomes sad enough, his cape and the spikes on his gloves droop, and his body's brightness starts to darken.

He wears a purple cape, mask, gloves, a green shirt with a white circle with his head on it in the middle, green pants, and black with white shoes and underwear on top of his pa 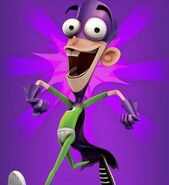 Retrieved from "https://hero.fandom.com/wiki/Fanboy?oldid=2096272"
Community content is available under CC-BY-SA unless otherwise noted.