NOTE: This article is about the incarnation of Fandral from the Marvel Cinematic film series. The mainstream version can be found here: Fandral.

Member of the Warriors Three

Flirting with other women.

To help defeat Malekith (both succeeded).
To stop Hela (succeeded posthumously by Thor).

Together, he, Hogun, and Volstagg form the Warriors Three, Asgard's bravest warriors. Alongside his friends, Hogun has assisted Thor in stopping Loki in destroying Jotunheim, defeating the Dark Elves from their attempt to conquer the realms, but was later killed by Hela.

He was portrayed by Josh Dallas (who also played Prince Charming in Once Upon a Time) in the first Thor film and by Zachary Levi (who also played Chuck Bartowski in Chuck, Luke Collins in Heroes Reborn, and Shazam in the 2019 film of the same same, and voiced Flynn Rider in the Tangled franchise) in the sequels.

In Thor: The Dark World - The Official Game, he was voiced by Vinnie Penna, who also voiced Michelangelo in 2003s Teenage Mutant Ninja Turtles animated series.

In What If...?, he was voiced by Max Mittelman, who also voiced Saitama in One Punch Man, Sabito in Demon Slayer: Kimetsu no Yaiba, King in The Seven Deadly Sins, Ryuji Sakamoto in Persona 5, Red XIII in Final Fantasy VII Remake, Harry Osborn in 2017's Marvel's Spider-Man animated series, and Leo in Fire Emblem.

Fandral was one of the Asgardians to appear at Thor's coronation. However, it was ruined when a group of Frost Giants attempted to steal the Casket of Ancient Winters. Fandral followed Thor to Jotunheim with the other Warriors Three, Sif, and Loki and entered a battle with the Jotuns. However, Odin rescued them at the last minute. He punished Thor by stripping him of his powers. Loki revealed he had the guard alert Odin to Fandral, the Warriors, and Sif before he left.

Hogun suspected Loki had something to do with the Jotuns invading Asgard. However, Fandral was against the very thought. Despite Loki being jealous of Thor, Fandral felt that Loki was not a traitor. However, after Loki refused to lift Thor's banishment, Fandral grew more and more desperate to have his friend back. one evening, Fandral was quite irritated with Volstagg's constant eating and nearly entered a fight with him. However, Sif and Hogun stopped them before it could escalate.

The group agreed to go to Earth to rescue Thor after Heimdall purposefully left his post. The Warriors Three and Sif used the Bifrost to get to Midgard, where they were reunited with Thor and acquainted with his human friends, Jane Foster, Darcy Lewis and Erik Selvig. As they convinced Thor his brother was behind the deception so far, when Loki sent the Destroyer to kill Fandral, the other Warriors Three, Sif, and Thor, Fandral helped evacuate the citizens of the city. They witnessed Thor face the Destroyer and regain his full power. The Warriors and Sif, along with Thor, returned to Asgard after Heimdall, before he succumbed to unconsciousness, had summoned the Bifrost to bring them back home. Thor told Sif and the Warriors to get Heimdall to the infirmary when he confronted Loki

After the Bifrost is destroyed, Fandral went to a celebration with the return of Thor. However, Thor left in the middle of the feast, still grieving for his lost brother.

In the final attempt to bring peace to the Nine Realms since the Bifrost was repaired, Fandral was present during the Battle of Vanaheim, where he fought with bravery and witnessed Thor defeat the Kronan Marauder. Fandral celebrated victory, even attending a feast in the aftermath of the battle. He and Volstagg left Asgard and returned with more Marauder prisoners. When one of the prisoners, escaped, Fandral held off the rioters of the prison escape but in the aftermath of the battle, Frigga, their queen was killed. Fandral attended her funeral.

After the sack of Asgard, Fandral decided to assist Thor in helping break both Loki and Jane Foster from custody in order to get Jane off world to lure Malekith to them, where Thor would destroy the Aether when the time was right. Later, Fandral assists Thor, Jane and Loki in breaking them out of Asgard by flying a ship that is following the spaceship Thor, Jane and Loki are using to escape their pursuits. As Loki fell to Fandral's ship rather ungracefully, Fandral remarked that Loki's time in the dungeon had not changed it that much. He left the Princes and Jane on the ship while he fought off some of the Einherjar. Fandral apologized to them when he went to fight them off, telling them it was nothing personal.

After Hela broke out of her prison due to Odin's interference, she killed Fandral and Volstagg when they attempted to attack her.

Fandral's death was later avenged alongside his friends, as Hela was killed by Surtur, which caused the destruction of Asgard. 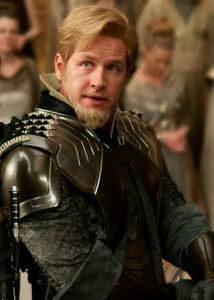 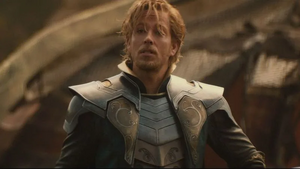