Fang is one the two deuteragonists of the South Korean-Chinese animated movie Dino King 2 Journey To Fire Mountain. (Or Speckles the Tarbosaurus 2: The New Paradise.) She is a Tarbosaurus female looking for her daughter Blue , kidnapped by contemptuous Deinonychus and eventually crossed paths with Speckles, a male Tarbosaurus whose the son, Speckles Jr was also kidnapped.

She voiced by Erin Conner.

Fang is above all a mother devoted to her daughter and will stop at nothing to save her. She also has a highly developed maternal instinct, when she saw sauropod mothers steal their eggs, she immediately sought to stop the egg thieves.

Fang also seems to have a low regard for small herbivores like Cy, considering it only as a dinner even if later she ended up considering him a friend and even teased him about when she wanted to eat it.

Initially, Fang regarded Speckles as a selfish one for refusing to help the sauropods recover their eggs, but after Speckles ended up being helped in spite of himself, Fang began to have a better opinion of him.

Approximately two weeks before the film's events, Blue was kidnapped by the Deinonychus pack and Fang kept trying to find and rescue her daughter.

When Speckles and Cy the saichania fall into a crevasse, Speckles who had been stung by a Brontoscorpion and started to lose consciousness, spots in the shadow Fang who approaches them, first mistaking her for his late mate, Blue-Eyes.

A little later, Fang tries to attack Cy until Speckles wakes up and the two tarbosaurus start a fight which is not to the advantage of Speckles which is not fully recovered, which allows Fang to push it back before putting it to the ground. Her opponent immobilized, Fang scolds him for attacking her when she had saved his life, at the disarray of Speckles. Seeing that Speckles ceases hostility, Fang frees him from her grip and explains that she placed healing herbs on his wound to stop the Brontoscorpion's venom. She also says that she intended to serve him Cy for dinner, which annoys the saichania who then tries to play the hard ones, but Fang is not impressed by the short-sighted herbivore and intimidates him quickly until Speckles stops the hostilities. Fang then introduces himself and then explains that she is looking for her kidnapped daughter and that she has followed the same smell as Speckles and Cy was tracking.

Understanding that they are looking for the same kidnappers, Fang joins the duo to find her daughter. Walking through the desert in strong heat, the trio begins to get tired until Fang spots an oasis where they hasten to drink. Their refreshment is interrupted by the cries of a flock of Pukyongosaurus whose eggs are being stolen stolen by a pack of Carnotaurus. Fang, refusing to let the eggs get stolen by the despicable carnivores, tries to throws himself into the battle, but Speckles stops him, saying that they can't get involved because it is not their business and they have not got time. Fang calls him selfish and still goes to fight with the Carnotaurus pack. She puts up a good fight, but their superior soon start to overwhelm her until a reluctant Speckles also throws himself into the fight. The leader of the Carnotaurus is subdued by the Tarbosaurus male, forcing all the pack to retreat. Happy to see the eggs hatch and reunited with their mothers, Fang warmly congratulates Speckles for making the right choice although he seems to be trying to hide his joy.

At nightfall, the trio stops at the edge of a ravine to rest. Fang mentions that she and Blue often had fun telling the stars while Speckles admits with regret that he shouldn't have been as hard on his son. Fang understands that he only wanted him prepared for a constantly changing dangerous world, although that didn't change Speckles' thought that the capture of his son was his own fault.

The next day, the trio crosses a large canyon when Cy sniffs the smell of Deinoychus not far from there. After spotting three Deinonychus, Cy draws them near a precipice so that Speckles and Fang do not ambush them from behind. Two of them flee while the dumber Ditto gets his tail stuck by Speckles. The two large carnivores question Ditto on the place where the children and after having had the responce, Cy throws the Ditto off the cliff. Unfortunately an earthquake caused by the volcano triggers a landslide which blocks the path to the three dinosaurs. After a few unsuccessful attempts to move the ties, the Pukyongosaurus herd they had helped arrives and thanks to their size, they clear the way for the trio.

Finally halfway, The trio enters a brutal fight between them and the other Deinonychus but they manage to defeat them all. Right after that, a second earthquake occurs, allowing all the children who had been kidnapped by the Deinonychus to flee as the surroundings begin to collapse. The trio find themselves on the way of the children fleeing and Speckles and Fang tries to find Jr and Blue before finding them fleeing in the opposite direction.

The children enter by the river into a dark cavern where some children were taken away never to be seen again. Three large iguanas appear and two of them try to devour Blue and Blade until Fang arrives and scares the two monsters away with a loud roar. Blue jumps for joy on her mother and then follows a tender reunion hug. Unfortunately for everyone, a reptilian monster even bigger than a Pukyongosaurus arose, forcing the dinosaurs to flee to save their lives. They manage to find refuge in a corner small enough to prevent the monster from reaching them. Jr, who was far from the group before the monster appeared, managed to lure the monstrous beast away from the others so that Fang and Speckles then attacked the monster. The cave then begins to collapse, pushing the others to flee and the monster is buried under the debris but not before hitting Jr hard enough to apparently kill him. Fang then watches Speckles mourn the death of his son until Jr wakes up. The dinosaurs then rushes towards the exit when the lava begins to invade the places but discovers that their only hope of survival is blocked by the stones. The monster still alive, the wedges and tries one last time to kill them but while trying to kill Speckles, he bumps against the wall, freeing the exit and allowing the group to escape in time while the monster dies under the landslides.

Exhausted but still alive, the dinosaurs gaze in wonder at the magnificent valley just in front of them. The misadventure finally ended, Cy bid farewell to his friends for going back with his own kind and after Speckles tell him to say goodbye in turn, Fang humorously recalls the moment when she wanted to eat it but the saichania laughs too and wants him give a goodbye kiss which seems to annoy the female Tarbosaurus who makes a whispered sign after having discreetly pointed at Speckles. Cy understands and wishes him luck with him by pointing out the bad temper of the male Tarbosaurus before leaving. Speckles and Fang then hug their children lovingly before going to their new home. 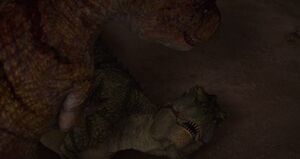 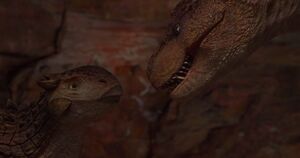 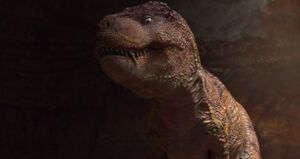 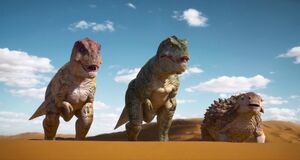 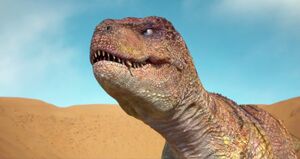 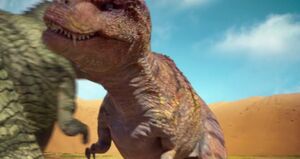 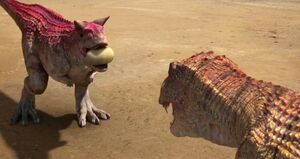 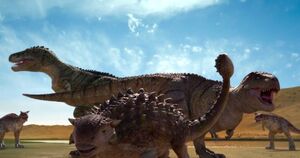 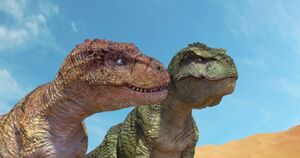 "You did the right thing." 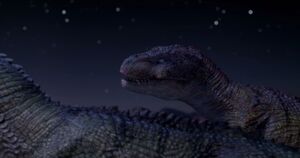 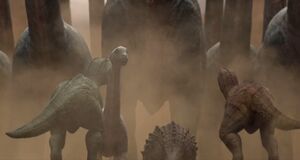 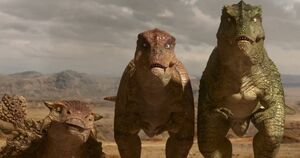 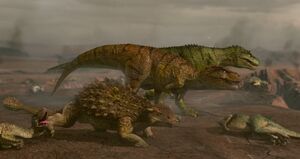 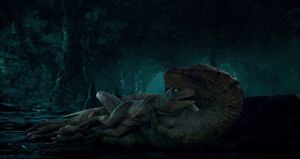 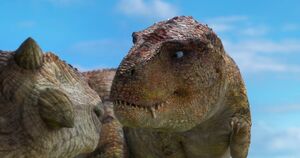 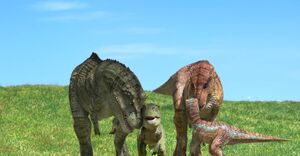 Retrieved from "https://hero.fandom.com/wiki/Fang_(TDK)?oldid=1853337"
Community content is available under CC-BY-SA unless otherwise noted.