Able to project her astral body

Training and honing her magic skills under Schierke's tutelage

To become a person worth to someone and be loved/accepted.

Kingdom of Falconia ruled by Griffith

She is a noblewoman from the Vandimion family who led the Holy See's ceremonial guard, the Holy Iron Chain Knights. She would later become a secondary protagonist as a member of Guts' New Party, replacing the other's one.

Falcon of the Millennium Empire

After the destruction of Albion Farnese renounced her postion as Holy Iron Chain Knight general, and set out to find Guts. Farnese would eventually find him again in the wilderness and asked him to allow her to accompany him, explaining that she has left the Holy See and sees him as the only way to truly understand the world. With Isdro questioning her intention, Farnese then cuts off her twin tails as proof of her new conviction and intent to make up for the wrongs she committed against him. Guts, fearing he needs additional help to ensure Casca's protection from himself should the Beast of Darkness take over his body again and from ever ravenous evil spirits attracted to the Brand, allows Farnese to accompany him. Since then, despite her occasional nuisances to the group due to her inexperience, Farnese would serve as Casca's caretaker. When Farnese learns Guts' destination is Elfheim, she is concerned that her presence in Vritannis to acquire a ship might have consequences for her.

When the party were close from Enoch Village on the way to Vritannis, Farnese and Casca were nearly abducted by a Troll, hostile and rapacious astral species from Qliphoth, before Isidro intercepted the beast and saved them. But when more trolls appear, Farnese is shocked to encounter an actual witch (named Schierke) who saved them. When the group arrived to Flora's home, Farnese was wary due to her role in witch burning though Flora assured her she bore her no ill will (as Farnese too, is the victim of her own misguided fanaticism and desperation for attention). The following morning after spending the night at the Mansion of the Spirit Tree, her group have agreed to help Schierke dispatch the trolls attacking Enoch Village, Farnese receives a silver chain mail armor and a silver dagger to defend herself against supernatural creatures. (although comically implied that she wanted Isidro's Dagger of Salamander)

When Schierke managed to purge the village of the trolls with a flood, Casca and Farnese got caught in the sweep, end up being separated from the others and taken by the trolls to their cave. Coming to while seeing bizarre and eldrich things, Farnese musters the will to protect Casca from the trolls until Guts and the others arrive to save them. After the Troll extermination ended, as the group are returning and nearing Flora's' mansion, Farnese is instructed by Guts to keep herself and Casca save as he senses the apostles of Griffith's reborn Band of the Falcon who are setting the Spirit Tree on fire. A few days later, while nearing Vritannis, to Serpico's shock and awe, Farnese asked Schierke to teach her to use magic so she can better help Guts in ways besides protecting Casca.

Upon arriving to Vritannis, Farnese attempted to request her father for a ship, but ended up being scolded and confined to the estate instead. But Farnese's older brother Magnifico, offered to provide her a ship for her friends on the condition that she becomes the fiance to Roderick of Schtauffen who is his close friend. Farnese accepts in offer, having Serpico return their effects to the others while she gradually begins to wonder if she is alright with this. Meanwhile Guts' party, sensing something is not quite right and their passage to get a ship accidentally burnt by Casca, Sets out to hear directly from Farnese.

During the banquet Magnifico held to announce the bethroval, the Kushan attack the festivities with tiger Pishaca with Farnese joining the fray before Schierke provided her with Serpent of Thorns fetish to fight with the others. Realizing she almost returned to noble life out of nostalgia, Farnese returns to the group with Rodrick (who is infatuated with Farnese) offering his aid in getting the group to Elfheim via his ship. Navigating through chaotic and perilous battlefields which Vritannis had become due to Kushan raid, encountering demonic Kushan beasts, Apostles, Guts' Berserker power, much fights, close calls and difficulties Guts' Party including her finally find Roderick's ship began to sail out to the sea.

A day after leaving aboard the Seahorse, Farnese is earnestly trained by Schierke to astral project herself as the two travel around the ship unseen before seeing Guts and overhearing him explain his relationship with Casca to Roderick. Farnese suddenly finds herself back in her body to her astonishment, later tending to Casca when she is in need for a hot bath after she nearly drowned in the sea. When Casca pour a bucket of water on her after she accidentally got soap in the woman's eye, Farnese snaps at Casca for being ungrateful to the man who has constantly risked his own life to save hers many times. Farnese breaks down in tears before Casca cheers her up by dumping another pail of water on herself. Sometime after Roderick and his men drove off Sharkrider Pirates, Farnese is given some peace of mind when told that she has a vital role in her group despite what she believes.

During the travelling crew's battle against Sea God and its abominable minions, Farnese (Schierke had to attend to Guts' Berserker Armor to prevent him from losing his sanity) erected magical barriers that surrounds the ship to keep herself and her group safe. With Guts successfully slaying Sea God while Farnese protecting her remaining crews with her magical powers, Farnese is hailed by Roderick's crews as "The Seahorse's Guardian Angel".

Her wish to be worthy and helpful to someone has finally bore fruition.

When landing at Elfhelm it was learned through one of the witches that King Hanafubuku can look into peoples' hearts and restore memory, meaning it is indeed possible to heal Casca. Upon hearing this news Guts smiled more deeply than he has in years, causing Farnese to look on jealously, the party discover the Flowerstorm king is in fact actually one of the witches who welcomed them: Danann.

After sentencing Puck and Magnifico to a day of community service when the two's collaborative plot to overthrow her is brought into light, Danann asks Guts to remain while requesting Schierke, Ivalera, and Farnese to accompany her and Casca. Once in a mushroom filled chamber, Danann explains to Farnese and Schierke that the Passage of Dreams ritual requires them to astral project themselves into the mind of Casca and travel through its recesses. But Danann warns them that the world of a person's mind is a more difficult place to move about in compared to the Astral Plane, Schierke and Farnese entering into Casca's dreamscape after being put to rest. The two women initially find Casca's dreamscape to be a series of childish scribbles with a shadowed silhouette meant to represent Guts, guided by Danann's petals to their destination: A mental recreation of the Eclipse.

Farnese and Schierke are about to discover Casca's deepest terror that shattered her mind. 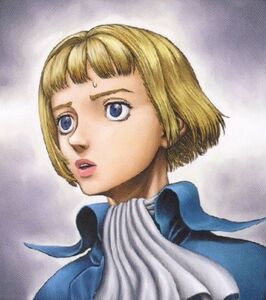 Retrieved from "https://hero.fandom.com/wiki/Farnese_De_Vandimion?oldid=1647800"
Community content is available under CC-BY-SA unless otherwise noted.