Farore is fair-skinned with green hair tied into two buns at the top of her head with light yellow hair bands, with three bangs, and has green eyes. For clothing, she wears a ball sleeved lime green dress with yellow triangles aligned in a certain pattern. She has pale blue frilly bracelets, blue cover with yellow circles on her chest, pale blue leaves at the hem of her dress. She wears red-brown tights with brown short boots on her legs and feet.

Farore has a minor, yet important role in the game where in the Linked Game and true to her title, she would share secrets with Link and has him keep them in a journal called Farore's Memory. She is found in the Hall of Secrets.

Farore was going to have a major role in the cancelled third game called The Legend of Zelda: Mystical Seed of Courage as Din and Nayru had in Oracle of Seasons and Oracle of Ages respectively. But having a third game would make the game too complicated, so Farore instead appeared in both games.

Farore reappears alongside Din and Nayru in Happy Hearth Inn where they are searching for a new home in Hyrule Castle Town. If she is given a house to live in, she will grant Link Farore's Charm which will temporarily make it easier to find Kinstone Pieces. She is described has helpful and has a kind nature and people take advantage of it, which upsets her. 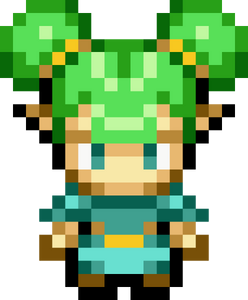