Fauna is one of the three main fairies (alongside Flora and Merryweather) of Disney's 16th full-length animated feature film, Sleeping Beauty.

Fauna is the slimmest of the three and the one in green.

Flora, Fauna and Merryweather (also known collectively as the Three Good Fairies) are first shown arriving at the christening of the newborn Princess Aurora. Fauna gives her the gift of song. But before Merryweather can give her gift, Maleficent arrives and curses the princess to die before the sun sets on her sixteenth birthday. Fortunately, Merryweather hasn't given her gift yet, so she uses it to soften the curse so instead of dying, she'll just fall into an enchanted sleep that will only last until her true love kisses her.

Next, the fairies are having tea while Fauna suggests reasoning with Maleficent as the latter "can't be all bad" (but she really can, as Flora points out). Flora has an idea on how to keep Aurora safe but prefers to keep it hidden between her and her followers alone, so they shrink themselves and hide in a little ring box. Flora decides to turn not Maleficent, but rather, the princess, into a flower, but Merryweather points out that Maleficent can send a frost, and Fauna points out that the bad fairy ruins Flora's nicest flowers. As Fauna then points out that Maleficent doesn't know anything good, Flora decides to turn the three of themselves into peasant women (with no magic or wings) while hiding the princess in a woodcutter's cottage deep in the forest. The fairies then take away the infant princess to hide her from Maleficent, her goons and her raven Diablo.

Sixteen years later, the fairies plan a surprise birthday party for Briar Rose (Princess Aurora while she is hidden) and send her out to pick berries as a distraction. Fauna decides to bake the cake (Merryweather had been doing all that, while Fauna was the one who had been sewing, during the hiding). Later, neither the cake or the dress works out well, so Merryweather decides to get the magic wands. For this, they have to block up every cramming (unaware that the chimney counts) by locking the doors, closing the windows, and placing cloths on every crack, while Flora uses her magic to make the dress, Fauna makes the cake and Merryweather cleans up the room. During this, Merryweather and Flora fight over whether the dress should be pink or blue, alerting Diablo, who then finds Briar Rose returning from berry-picking. The fairies surprise her, and after finding out she met a stranger, they reveal her real identity (unaware that the stranger is the man she was betrothed to since birth). They remorsefully forbid her to see him again, much to her disappointment.

The fairies, back in their normal forms, take Aurora back to King Stefan's castle and take her to her boudoir where Flora makes a tiara for her. They leave a tearful Aurora in her boudoir alone, unaware that Aurora is still being cursed. They then find out she is about to touch the spindle on a spinning wheel (Maleficent in disguise, as in the princess's infancy, King Stefan ordered that all spinning wheels in the kingdom be burned), and they are too late and find her "dead". They lay her on the bed and then put the kingdom to sleep. Flora then finds out from King Hubert (King Stefan's best friend and the father of Aurora's betrothed) that Prince Phillip found the "peasant girl" once upon a dream, finding out that the stranger was, indeed, Prince Phillip. The fairies head back for the cottage, only to find out that Maleficent and her goons have captured the prince.

The fairies then go right to the Forbidden Mountain and sneak into the dungeon to free Phillip. Before he leaves, Flora uses magic to give him a sword and shield, and they escape, only for Diablo to warn the goons of the escape, and Flora uses her magic to turn the boulders, arrows and acid respectively into bubbles, flowers and a rainbow, and to help him escape from falling when the drawbridge door closes, but Merryweather chases after Diablo to turn him into stone. All three fairies then catch up to keep the forest of thorns from interfering with Phillip's escape. When Maleficent becomes a dragon, all three fairies put their magic into Phillip's sword to ensure that he he will be able to accurately throw the sword at her. They then lead Phillip to the tower and rejoice when Aurora awakens. They are then seen on the balcony, watching, as Fauna cries happy tears. 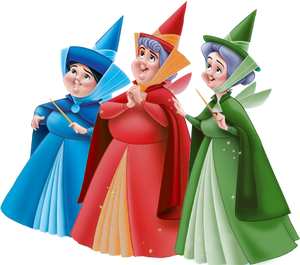 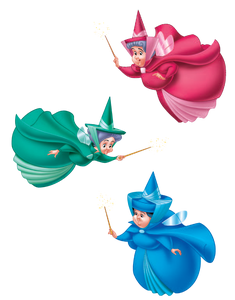 Fauna, Flora, and Merryweather arriving at the christening of the baby Princess Aurora.

Fauna and her sisters admiring the baby princess.

"Tiny princess, my gift shall be the gift of song."

Fauna trying to protect the baby princess from Maleficent.

After Maleficent curses Aurora, Fauna tells King Stefan that Merryweather will be able to soften the curse.

Fauna crying about Aurora being sent to sleep

Retrieved from "https://hero.fandom.com/wiki/Fauna?oldid=2216970"
Community content is available under CC-BY-SA unless otherwise noted.