Faust is a character from the Guilty Gear series of fighting games. He is a medical genius gone insane and sane once more. Faust is probably one of the most unorthodox characters in the series. He made his first appearance in the first game, Guilty Gear, as Dr. Baldhead before hiding his identity and becoming Dr. Faust from Guilty Gear X onwards.

Faust's extreme height and light weight give him a bizarre, tall, lanky physical appearance, and allows him to tower over every other character in the game (although he rarely does, due to his extremely low fighting stance). He wears a paper bag as a mask (with one eyehole), and wields a giant scalpel as a weapon.

He often behaves like a normal doctor, but in the battlefield, a crazy one, by using moves that make players with a sensitive case of laughter laugh themselves silly. However, despite his crazy style and wacky personality, he is someone who is loyal to his duties as a doctor and strives to help those in need, as a way to atone for his sins and past as Dr. Baldhead. He is also fierce towards enemies like I-No who is rather playful and sadistic to her foes, and does not hesitate to fight seriously if needed.

However, Venom implies that his bloodthristy side still looms over Faust as from his past, but is said to be kept under control. Even to people such as Venom, the man in charge of the Guild responsible for the death of one of his patients, he is willing to make sure he and Faust himself stays alive from being surrounded by an army of Robo-Ky's, implying a forgiving nature for those who have what Faust seeks.

He is also friendly towards entities like Slayer, who suggests that Faust would thrive well in his world as the normal world seems to be unfitting for him; Faust thanks him for the offer, but still decides to remain in the normal world for those who need his help.

Faust (aka Dr. Baldhead) was once renowned as an amazing physician. People would come from far and wide to be cured by him. But one day, a young girl once died during operation. This drove Faust mad, and he became a serial killer, employing both his knowledge of human anatomy and his occult powers against his victims.

Baldhead was released from prison to participate in the tournament Testament hosts. In his ending, he is visited by the voice of the young girl whose death drove him to insanity. She assures him that her passing was not his fault, and that he shouldn't blame himself. He then runs off into the night. It goes on to say that the serial killer known as Baldhead was never seen again, but that a new healer emerged.

Guilty Gear X reintroduces Dr. Baldhead as Faust, who is wandering, and trying to atone for his killings by resuming his duties as a doctor, and helping as many people as he can. In one ending, he meets with Dizzy and convinces her to leave the forest she lives in, in an attempt to prevent further attacks on her. In the other ending, he cures Zato of his ailment, and leaves Venom to care for him, taking the parasite on as a result. Due to the events that take place in later games, the latter ending is impossible.

Faust runs into I-No early on, and decides to pursue her, believing that she will cause people harm, and that it is his duty as a doctor and protector of the needy to prevent this. In one ending, he tracks her down, and she confronts him about his dark past, accusing him of still enjoying bloodshed. After rendering her unconscious, he admits that he still enjoys causing pain, yet vows to continue in his duty as a doctor. In another ending, he meets Zappa and learns of his condition. Upon examining the body, he decides that he does not know how to cure this ailment. In the remaining ending, he fights with Venom and learns that the Assassin's Guild was involved with the death of the girl that drove him insane. He and Venom are then assaulted by a large horde of Robo-Kys, at which point Venom says that if they survive, he will tell Faust everything. Any of Faust's story paths are capable of fitting into the overall canon of the series.

Faust continues his journey trying to heal whoever he finds, and he finally learns how to cure Zappa. Depending on the player's action, he performs a surgery on Zappa that will change his face to a Picasso-like drawing which, according to Faust, will repel the ghost he bears. However, this ending can be considered a joke, while the actual treatment is found on Zappa's ending. (Path 2)

In another path, Faust meets with Slayer, who asks Faust if he would like to come with Slayer to the other world where Slayer plans to retire. Faust refuses, however, saying that there are still people around the world who need his help, to which Slayer agrees, letting Faust go on his way. (Path 1)

His unique, cartoonish powers raise the question as to how he obtained them. Faust's P.W.A.B. report states that he has the ability to manipulate time and space, though it is unknown where he learned this skill; this feat is likely accomplished through the scientific use of Magic (given his past profession as a doctor, and retaining his unmatched medical genius through insanity), his Chinese heritage and thus ability to use Ki, or some other source. Faust's reality-bending powers and medicial genius are referenced through Axl Low and Zappa's storylines, where they seek the doctor for cures (Axl's time-slipping and Zappa's possession); suggesting that he may be able to reach beyond the physical world and alter ("cure") things, much like he appears to do when he fights and materializes things out of thin air. 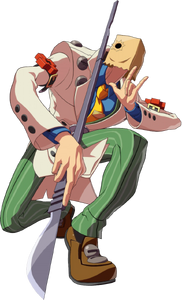 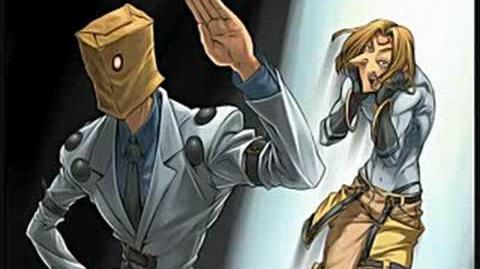