To protect the Lylat System

No information
Fay Spaniel is a girlish Cocker Spaniel who, along with Miyu, was to appear in the cancelled Star Fox 2 title for the Super Nintendo Entertainment System. Because her only appearance was in an unreleased game, she is not considered canon to the rest of the series.

As with Miyu, Fay pilots an Interceptor class Arwing which is far faster than the other Arwing models, but wasn't built with defense in mind. Her personality seems especially cheery and the "go-getter" type. She is characterized by her bubbly attitude, white fur, and a big red bow in her hair.

No official artwork of Fay was released until 2017. 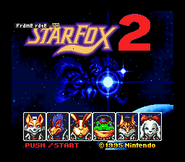 Fay and Miyu posing
Add a photo to this gallery
Retrieved from "https://hero.fandom.com/wiki/Fay_Spaniel?oldid=1748853"
Community content is available under CC-BY-SA unless otherwise noted.